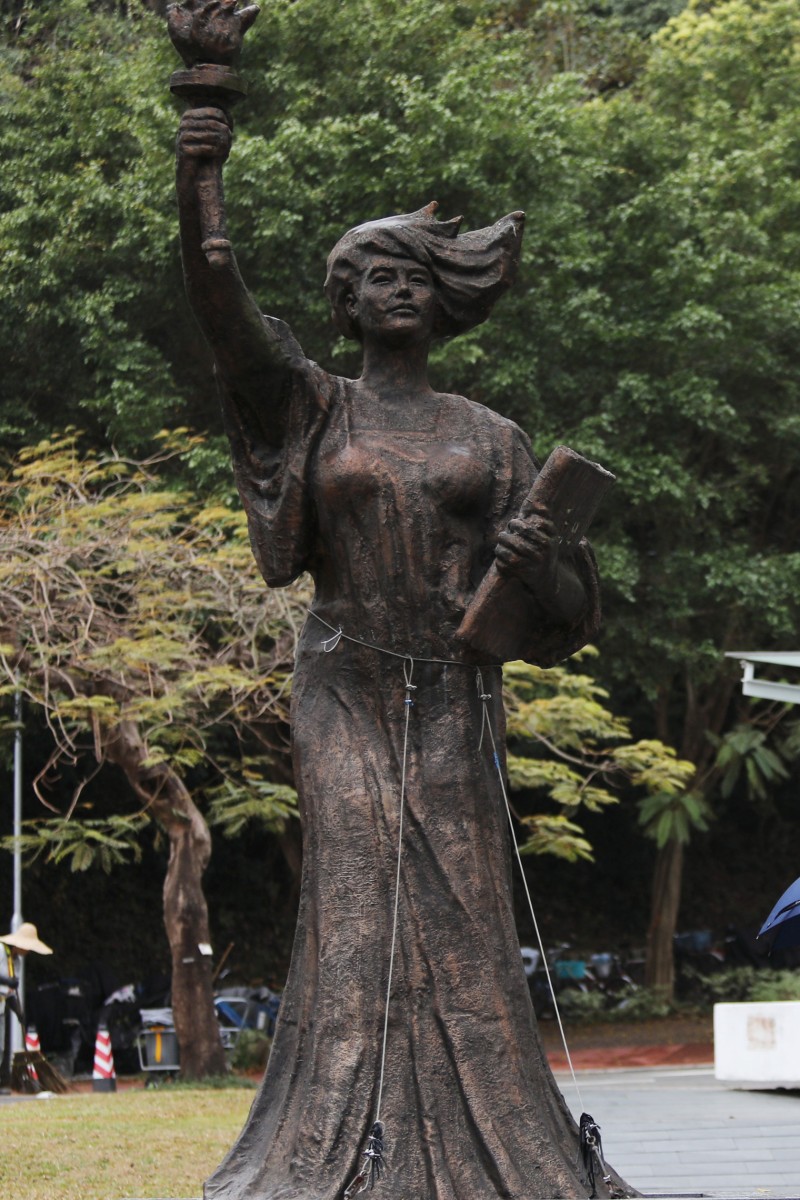 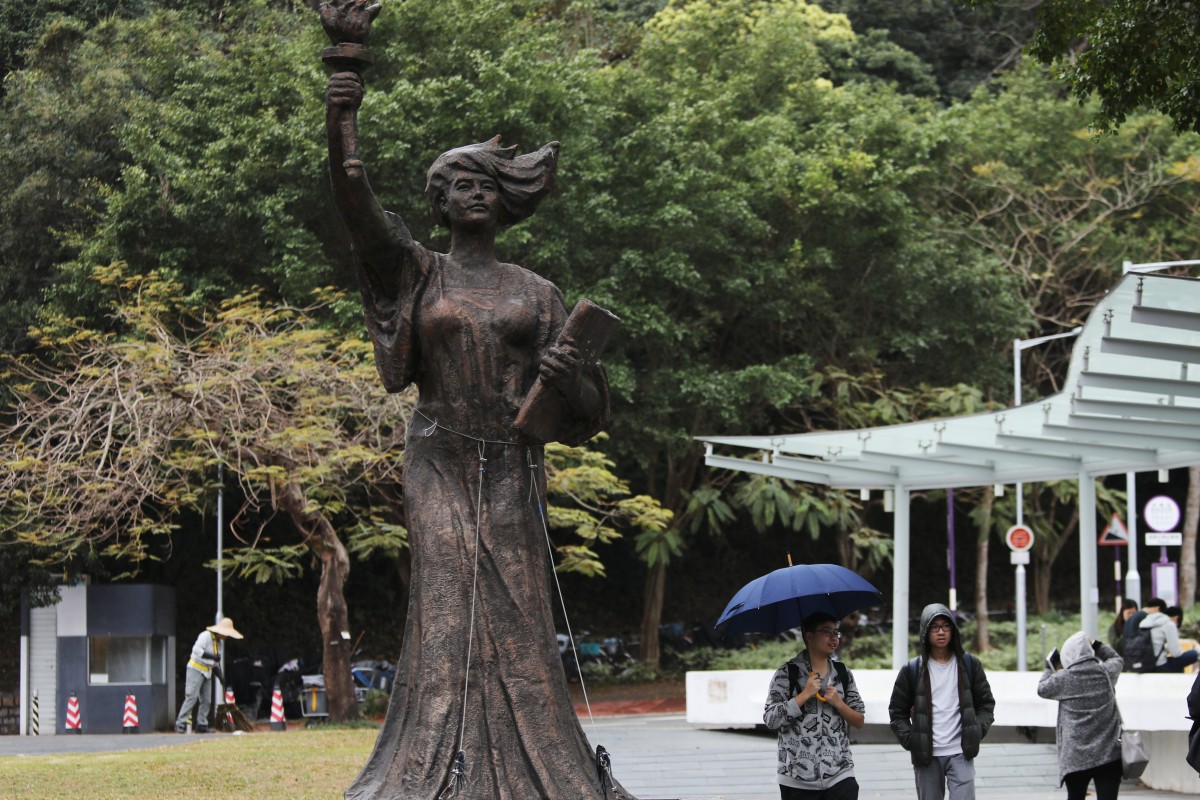 The Goddess of Democracy statue has been removed from the Chinese University campus where it had stood for about 10 years. Photo: Sam Tsang

A day after the University of Hong Kong (HKU) dismantled a sculpture commemorating victims of the 1989 Tiananmen Square crackdown in a late-night operation, two more local institutions have followed suit.

On December 23, a sculpture at HKU commemorating the victims of the crackdown was dismantled and taken away, two months after campus chiefs ordered its removal.

The HKU Council said the decision to take down the eight-metre Pillar of Shame was made in light of “external legal advice and risk assessment”.

“Latest legal advice given to the university cautioned that the continued display of the statue would pose legal risks ... based on [Section 10 of] the Crimes Ordinance enacted under the Hong Kong colonial government,” the statement said.

HKU removes Pillar of Shame sculpture in middle of night

The council added it was concerned about “potential safety issues resulting from the fragile statue” and that no official approval had ever been granted for its display.

The statue, created by Danish artist Jens Galschiøt, had stood on campus since June 1997. After HKU ordered its removal from campus in October, Galschiøt sought diplomatic help to relocate the memorial overseas. But he did not receive a reply from the Hong Kong government.

A day after the Pillar of Shame was dismantled, Chinese University (CUHK) removed a statue known as the Goddess of Democracy, while Lingnan University tore down a wall relief.

Danish artist Jens Galschiøt created the eight-metre Pillar of Shame to commemorate the 1989 Tiananmen Square crackdown. The statue had stood at the University of Hong Kong since 1997 until it was removed last month. Photo: EPA-EFE

Both artworks were meant to memorialise the bloody crackdown. They were created by sculptor Chen Weiming, a Chinese-born New Zealand citizen now living in the United States.

In a statement, CUHK said it had never approved a 2010 student union request to place the statue on campus.

It added that the two groups responsible for placing the statue on campus – the Hong Kong Alliance in Support of Patriotic Democratic Movements of China and its own student union – had been disbanded.

In 1989, student protesters and civilians gathered at Beijing’s Tiananmen Square to protest against corruption and demand greater political freedom. On June 4 of that year, the Chinese military ordered soldiers to open fire on the protestors. Reports have suggested that hundreds were killed, possibly more. Staff writers

A fourth university in Hong Kong wants an artwork commemorating victims of the 1989 Tiananmen Square crackdown removed, its student union has revealed, saying it has been asked by campus chiefs to take it away.

City University (CityU) student union said it had decided to relocate its Goddess of Democracy statue – which has stood on campus for nearly a decade – to prevent it from being damaged. The union also accused authorities of putting pressure on education institutions with an intent to silence academia.

On its Facebook page, CityU’s student union said the university had formally requested that the union take back its Goddess of Democracy statue.

“To prevent the statue from being damaged, we decided to relocate it some time later for preservation,” the union said on December 25. “The authorities have put pressure on education institutions in an attempt to silence academia and whitewash history.”

City University student union says it has decided to relocate its Goddess of Democracy statue at the request of school officials. Photo: David Wong

The union said it needed time to consider a new location and follow-up work, so it had asked the university to refrain from moving the statue without its consent.

Pro-Beijing heavyweight and University of Hong Kong (HKU) alumna Rita Fan Hsu Lai-tai, said the Pillar of Shame should have long been removed from HKU.

“I don’t care about the political reason. Students should live happy lives on campus, and I doubt they will be happy to see such a sculpture.” Staff writers

Issue: Did a piece of Hong Kong history die with Pillar of Shame’s removal, or is it a ‘negative icon’ that has overstayed its welcome?

When the Pillar of Shame was pulled down, a piece of the city’s history died with it, observers said.

Chinese University (CUHK) political scientist Ivan Choy Chi-keung said the removal of the eight-metre pillar could be interpreted by the international community as the end of the “one country, two systems” governing policy under which the city is granted a high degree of autonomy.

“The Pillar of Shame can be regarded as the last remaining icon of June 4, as well as for one country, two systems,” he added.

A gift from Danish sculptor Jens Galschiøt, the structure arrived in the city in 1997 and was erected at Victoria Park on the eighth anniversary of the Tiananmen Square crackdown. It was eventually brought to the University of Hong Kong (HKU) where it stood until it was removed last month.

The Pillar of Shame sculpture stood at the University of Hong Kong for more than 20 years until it was removed last month. Photo: Sam Tsang

Galschiøt told Reuters in an interview that the statue’s removal was “brutal” but any damage would be symbolic of recent changes in the city under mainland Chinese rule.

“Maybe it would be nice to have some damage on it. It sounds strange, but it is also a symbol. This is what they’re doing to ... Hong Kong,” Galschiøt said.

Executive Council member Regina Ip Lau Suk-yee said HKU had the right to decide how to handle the pillar, which she called a “very negative political icon”.

“My understanding is that HKU will not break the statue. It will keep it in storage and return it to the Danish artist at some time in the future,” Ip said. “I hope all universities in Hong Kong can focus on academic affairs and not get too politicised.”

Meanwhile US-based artist Chen Weiming, expressed “regret and anger” towards the removal of his artworks – the Goddess of Democracy statue at CUHK and the memorial wall relief at Lingnan University.

“[The universities] acted like a thief in the night ... They were afraid of exposure and of a backlash from students and alumni,” Chen told Agence France-Presse.

Chen said the works were only on loan to the schools and that he would take legal action if they were damaged. Staff writer, Reuters and Agence France-Presse