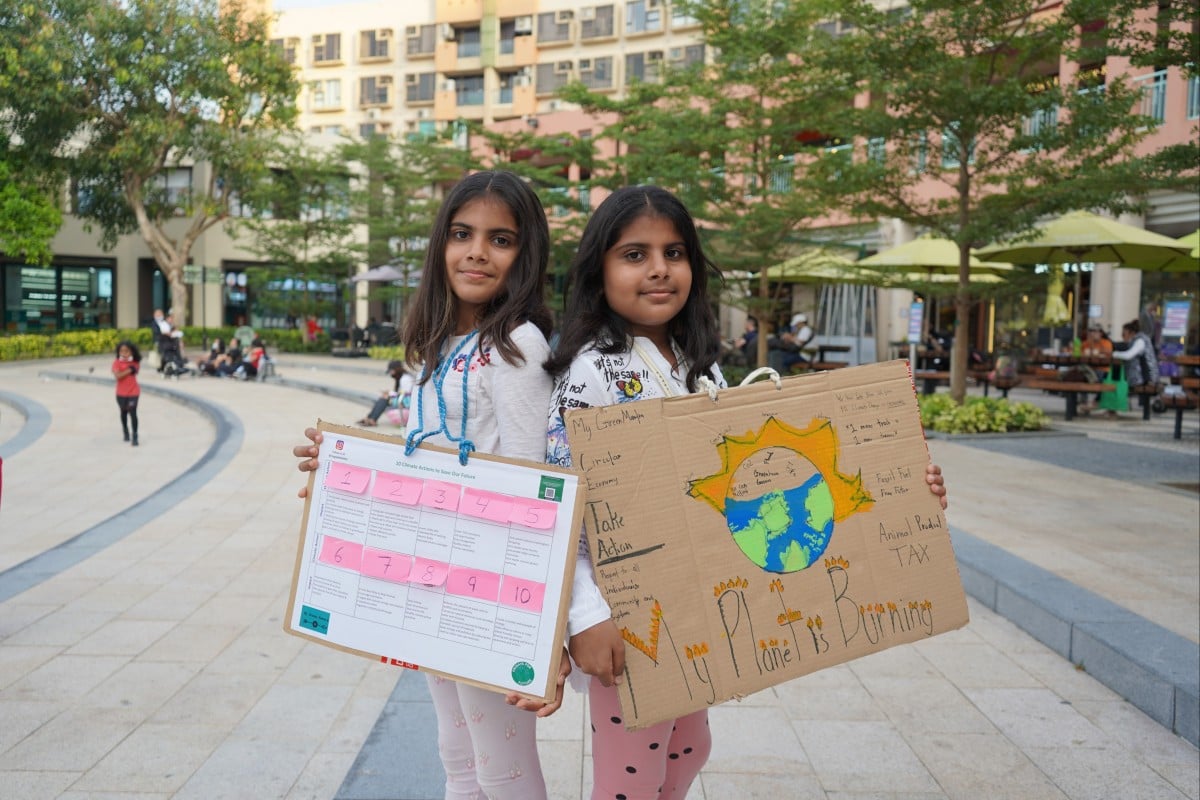 Sisters Reaha (left) and Dhaanya Ganeriwal take to the streets every week to educate people in Hong Kong about the climate crisis. Photo: Kelly Fung

Last year, Dhaanya and Reaha Ganeriwal noticed that Starbucks in Hong Kong was charging their mother HK$4 extra for requesting plant-based milk instead of the usual cow milk – and they were perplexed.

Greenhouse gas emissions for non-dairy milk, often made from oat, soy or almonds, are much lower than in the production of cow milk.

Dhaanya, 10, and Reaha, eight, could not fathom why the international coffee chain would ask their mother to pay more for making a planet-friendly choice. All three of them have been vegetarian and consuming minimal dairy for years.

Experts say there’s no turning back on climate change

“They’re punishing consumers for making better choices,” Dhaanya said. “That just discourages those who want to try [being] vegan and vegetarian, right?”

After their infuriating revelation, the two Discovery College students went straight to a nearby supermarket to compare the prices for cow and plant-based milk. The result? They cost almost the same.

The sisters went home to email the coffee chain requesting that it stop charging customers extra money for ordering non-dairy milk. A Starbucks representative responded without acknowledging their request, so they launched an online petition.

Dhaanya and Reaha are two of Hong Kong’s youngest green activists. But their advocacy started long before their Starbucks campaign. For the past three years, they have been taking to the streets every Friday after school as part of the #FridaysForFuture campaign spearheaded by Swedish climate activist Greta Thunberg.

Dhaanya said her advocacy began at school where she saw a photo of a turtle strangled to death by plastic.

“I felt really sad because turtles [were] ... my favourite animal,” the elder sister said. “And I really wanted to do something about it.”

Feeling unsettled, the girl, seven at the time, went home and asked her parents about the plastic problem.

“They told me about plastic, fossil fuels, global warming and climate change,” she recalled.

“One day, I just got tired of hearing all the news and the fact that I wasn’t doing anything about it. So I took some cardboard and wrote some messages on it.”

#Throwback to the time YP spoke to Greta Thunberg

One of those messages read “My Planet is Burning”, accompanied by drawings of the Earth on fire. Joined by her mother and Reaha, who was five at the time, they took to the streets.

The locations for their climate actions differ from time to time. Every so often, other young activists join them for their Friday strikes. The sisters also go on weekly beach clean-ups – some weeks, they even go three times.

When they first started holding their placards on the streets, many onlookers would either call them “silly” or ignore them, said Reaha.

Should the Hong Kong government charge residents for their household waste?

“I learned that nobody’s going to come to me if I just stand like this,” the younger sister said. “So my sister and I thought of making interactive game boards.”

The duo would invite passers-by to pick a number from one to 10 on the board. Each number would unveil a green action for people to try – from bringing their own shopping bags to opting for local produce. Then, the sisters would explain the environmental reasons for the action that was picked and ask participants to sign their Starbucks petition.

They illustrate the concepts with a “diamond system” they devised.

Reaha Ganeriwal holds up a board game the sisters use to educate people about environmentally-friendly actions they can take. Photo: Kelly Fung

The climate initiatives are divided into three categories: individual, community and system. At the bottom tip of the diamond are individual contributions. Through concerted efforts, single actions will rise to affect the community, eventually reaching systemic change at the top.

They have three primary goals: a fossil-free future, taxes on meat and other animal products, and a circular economy in which products are used and reused as long as possible.

“[One of the girls] was reading by herself about sustainable development goals on the website of the United Nations. Nobody told her,” she recalled, adding that the girls had influenced her to be more eco-friendly.

“I still remember ... when we were at the supermarket, and [Dhaanya] started tearing apart all the plastic.”

Before the sisters became climate activists, they had already been donating their birthday money to schools in India for years to go towards building air conditioning systems and water filters.

Reaha said she wanted girls in India to be educated.

“The girls just walk miles and miles in the hot sun ... And then they come back with gallons of water just for one day,” she said. “That’s why they get no education.”

“We don’t take any birthday presents, and we donate money to schools in India ... so that when girls go to schools, they can get water.”

Now, the Ganeriwal sisters hope to see the same change come to the coffee chain’s shops in Hong Kong.

Eight months into their campaign, about 400 people had signed their online petition, but Starbucks Hong Kong said it had no plans to change.

When approached for a response, Starbucks replied in a statement that it had “nothing immediate to share on plans in Hong Kong”.

Dhaanya said, “If Starbucks is willing to take a step, that could be a really big change, a community change.”

As the two sisters look at their plans for climate activism, they hope to inspire more people and businesses in Hong Kong to take action.

“I feel good that I’m making some changes and influencing people,” Reaha said.

Dhaanya added: “People need to be more aware. And if they are aware, they need to take action.”