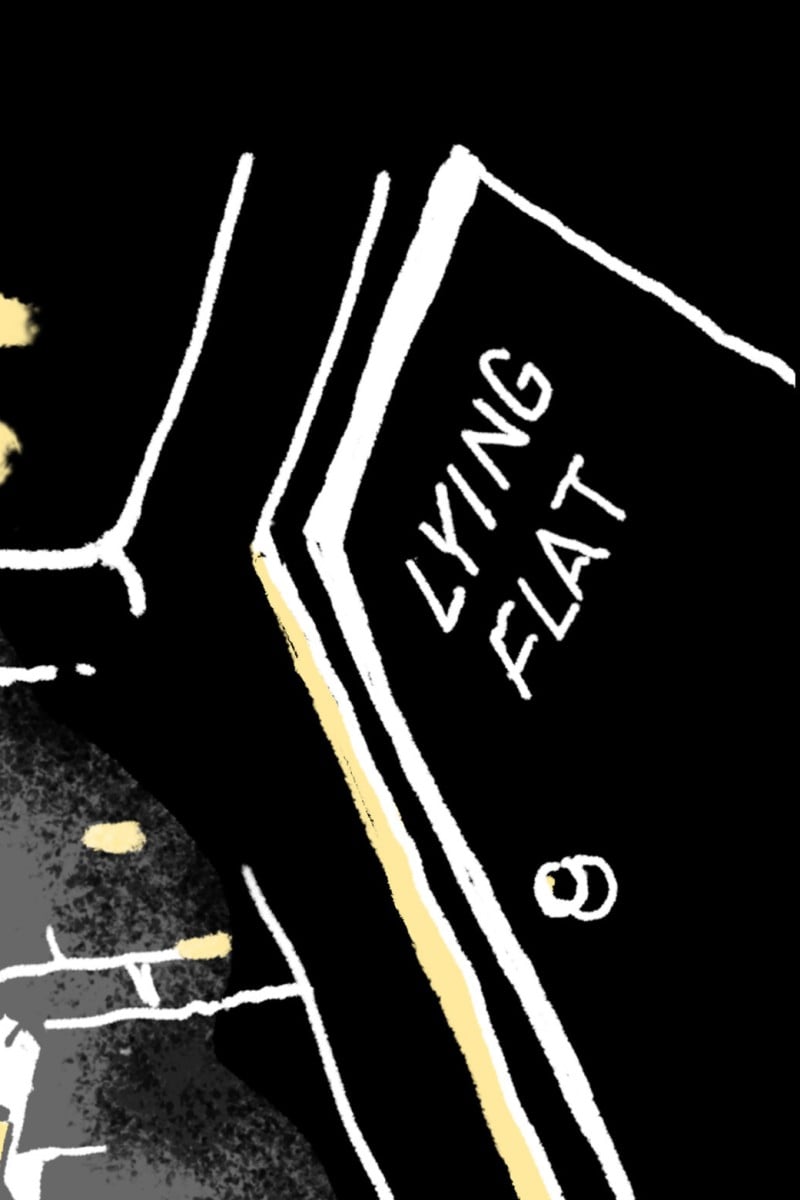 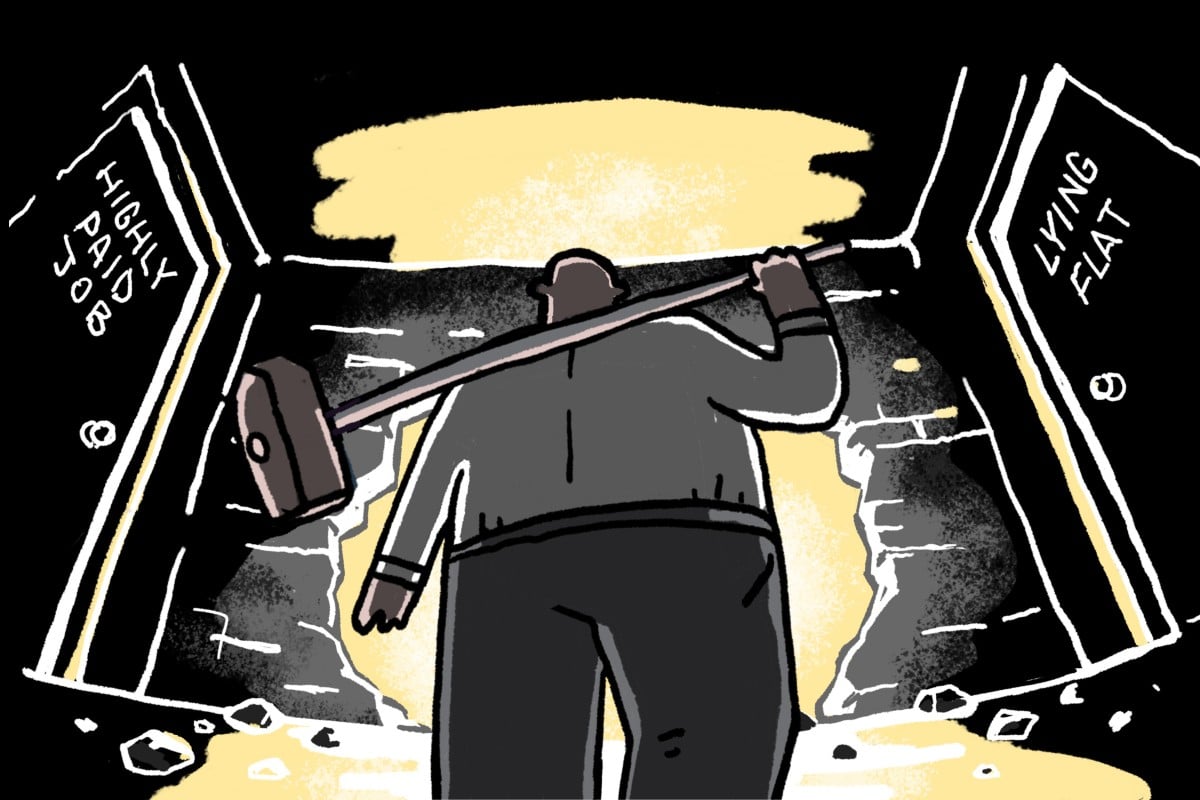 Some experts say young Hongkongers are not “lying flat” but are just trying to find a better future for themselves. Illustration: Perry Tse

Hong Kong’s Secretary for Education Kevin Yeung Yun-hung accused the city’s youth of “lying flat”, rejecting hard work and adopting an unconcerned attitude towards life in a blog post last November. He described this mentality as “passive and self-indulgent”.

“This passive mindset makes people feel dispirited, and it ... hinders the development of society,” Yeung warned in his blog post.

Lying flat became quite popular in mainland China, especially among the younger generation, after a viral online post in April 2021.

On the Baidu Tieba social media platform, a man in his 20s named Luo Huazhong wrote about how he had embraced this lifestyle of minimalism for two years. Luo explained how he was living a low-desire, zero-pressure lifestyle without a stable job, while staying with his parents in Zhejiang province.

“Lying flat is a state of mind ... I feel that many things are not worthy of my attention and energy,” Luo said.

His mindset struck a chord with much of mainland China’s young and disenchanted workforce that had been hit particularly hard by the nation’s economic slowdown and the coronavirus pandemic. From white-collar workers to university students, frustrated young people took to social media to declare themselves “lying flat youth”.

The “lying flat” attitude is characterised by a mindset of doing just enough to get by and striving for nothing more. Photo: Shutterstock

Authorities have been scrambling to suppress the trend, fearing that it could challenge social and economic order. According to economists and social commentators, lying flat in the long run could affect mainland China’s economy. It might also lower the country’s birth rate and threaten its social welfare system.

It even warranted a public condemnation by President Xi Jinping.

“It is necessary to prevent the stagnation of the social class ... and form an environment for improvement in which everyone participates, avoiding ... lying flat,” Xi said in comments published in October 2021 by the Communist Party’s journal on political theory, Qiushi. Staff writers

Some young Hongkongers are adopting the “lying flat” lifestyle, choosing to reject the rat race and hard work and preferring to earn only enough for their basic needs.

One example is University of Hong Kong student Tang Tsz-wa*, 22, who said he was unbothered by what life might hold after graduation.

Tang said: “I won’t look for a job with a high salary or high status. As long as I don’t starve or work too hard because of the job, I’ll be OK with it.”

However, some experts disagreed with Yeung that young Hongkongers were lazy or lying flat. They stressed that young people’s lifestyles might be different, but they did not lack drive or creativity.

She felt that part of the reason young people were making different choices these days was that more were coming from complex family backgrounds. These complicated arrangements left some young people distressed and distorted their values, which had an impact on their relationships too.

Teacher Amy Chan*, a counsellor in a Kowloon West secondary school with mainly low-income students, said lying flat did not equate to laziness.

Chan said many of her students who came from tiny, cramped homes desperately wanted to climb the social ladder but struggled to cope with the demands of six years of secondary school. More adolescents were stressed and dealing with mental health issues these days, she added.

Teens could develop a more positive outlook if teachers had more time to talk to students, she added, but most teachers were already overloaded with responsibilities.

Meanwhile, a recent study by Chinese University found that 803 respondents aged between 15 and 30 gave average scores of only 2.95 and 4.76 out of 10 for their level of optimism about Hong Kong and their future, respectively. Both scores fell from 4.37 and 6.02 in 2018. * Names changed at interviewees’ request.Staff writers

To address a “passive and self-indulgent mindset” in some young people, Hong Kong schools will need to infuse into all subjects civic values such as diligence, under a revised framework on civic values issued in November 2021.

Replacing the eight-page “Moral and Civic Education Curriculum Framework” of 2008, the revised guidelines add three new values, namely law-abidingness, empathy and diligence, to the existing seven – perseverance, respect for others, responsibility, national identity, commitment, integrity and care for others.

In an earlier blog post, Secretary for Education Kevin Yeung Yun-hung wrote that the new framework was needed as he was worried by the self-indulgent attitude of some young people and the trending idea of “lying flat”.

The “Values Education Framework”, as the new guidelines are known, echoed that language, suggesting young people today had expectations of “reaping without sowing”, and a “fluke mindset” that left life up to chance. It also expressed hope that students would work hard and contribute to their families, society and country.

However, Gary Tang Kin-yat, an assistant professor at the Department of Social Science of Hang Seng University disagreed that adding “diligence” to the list of values schools must teach would address the issues of inertia, or lack of motivation or ambition associated with lying flat.

“We do not train students to be diligent but motivate them to discover their passions and interests,” he said.

If young Hongkongers were rejecting the usual choices, Tang added, it could be because they were in a state of hopelessness from gaining no recognition for non-academic areas in which they excelled.

Asking for a Friend: Help! I’m totally burned out, and I can’t study

Final-year sociology student Emalia Au Yeung*, 22, said: “It is important to teach students about diligence so they can survive in society, but I don’t think diligence and lying flat have a cause and effect relationship.”

A student of the University of Toronto in Canada, she said her priority after graduation would be comfort, not a high salary or promising career.

“I won’t say I’m lazy,” she said. “I just don’t want to compete with others. I don’t want to make money that I won’t have time to spend.” * Name changed at interviewee’s request.Staff writers