Hot Topics: What to know about the cross-harbour section of Sha Tin-Central link that just opened 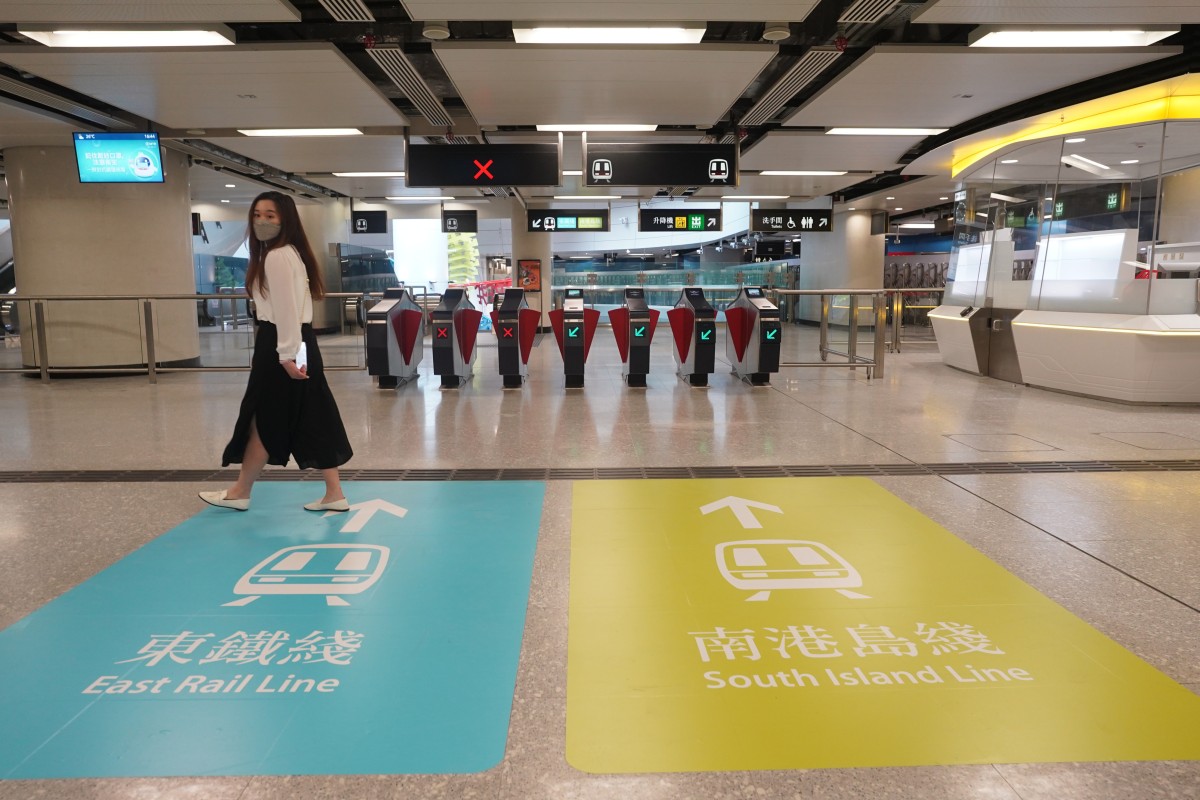 With the completion of the Sha Tin to Central link, Admiralty station is now a core interchange for the cross-harbour rail lines. Photo: Sam Tsang

The Hung Hom-Admiralty section of the long-overdue Sha Tin to Central link, Hong Kong’s most expensive rail project yet, fully opened to the public yesterday.

This opening marks the end of a scheme afflicted by repeated delays and cost overruns. The section is known as the cross-harbour extension of the East Rail line from Hung Hom station to Admiralty station, via the new Exhibition Centre stop in Wan Chai.

Travel times will also be shorter with the new extension. Using a new signalling system, the nine-car trains on the extended East Rail line will run at 2.7-minute intervals during peak hours.

To minimise overcrowding, a passenger information display system will show each train car’s loading capacity, so commuters can choose ones with more space. It will be at every platform on the line and on the MTR mobile app.

What is Uber’s vision for modernising Hong Kong transport?

The opening of the remaining Hung Hom-Admiralty section of the long-overdue Sha Tin to Central link closes the final chapter of a saga plagued by shoddy work, repeated delays and cost overruns.

Early this month, Secretary for Transport and Housing Frank Chan Fan said tests and trial runs on the cross-harbour section of the 17km link had been completed, ahead of the revised target date in June or July.

He pledged to draw a lesson from past blunders related to the project, saying improvements were under way.

“We have enhanced our scrutiny and supervision of the project and related procedures,” he said.

Jacob Kam Chak-pui, CEO of railway operator the MTR Corporation, said commuters would be able to travel from the northeastern New Territories to the heart of Hong Kong Island without changing trains, which would “energise the century-old rail service [the East Rail line]” and “keep Hong Kong moving”.

The corporation and its contractors were under investigation several times for their handling of the project, which was fraught with shoddy work and cover-ups. The government, as the project overseer, was also criticised for not detecting shortcomings quickly and taking firm action to ensure things were back on track.

The opening of the cross-harbour extension has been pushed back several times because of various issues, including shoddy work, rectification works at Hung Hom station, and vandalism of the connecting East Rail line by anti-government protesters during 2019’s social unrest.

The link suffered cost overruns with a final price tag of HK$90.7 billion, HK$10 billion over the original budget.

Originally slated to open in December 2020, the date was pushed back to the fourth quarter of last year, and the target was changed again to the first quarter this year.

The MTR Corp announced last October that the project would be delayed for a third time until June or July this year because of setbacks caused by signalling glitches. The rail giant has since managed to reduce the delay.

The Tai Wai-Hung Hom section of the Sha Tin to Central link – part of what is now the Tuen Ma line – opened last June after repeated delays at Hung Hom station, where a whistle-blower revealed shoddy work.

The East Rail line MTR extension will allow commuters to get from parts of the New Territories to Central faster, with savings along some routes, but bus operators are dreading their loss of business.

“They will suffer an exodus of passengers. Just for the Cross-Harbour Tunnel routes at Hung Hom station, the bus operators told me, they will lose 30,000 passengers every day during peak hours,” he said.

Bus operators say they expect to lose thousands of passengers from the Cross-Harbour Tunnel routes at Hung Hom station. Photo: May Tse

Tien, former chairman of the Kowloon-Canton Railway Corporation (KCRC), said bus operators had to explore new routes in new towns or housing estates without nearby rail stations, and had to ask the Transport Department to reduce some bus services to rein in costs.

The opening of the new cross-harbour rail line would hit them again, he said. The city has about 4,228 minibuses.

What to explore at the end of the MTR lines

Chau urged the Transport Department to take back 21 bus routes being run by the MTR Corporation, and hand them to minibuses to operate.

Quentin Cheng Hin-kei, spokesman of the commuter concern group Public Transport Research Team, said he was concerned about the healthy overall development of public transport. If people flocked to the MTR, he said, the rail system would be overloaded.

To anticipate changes in commuters’ travelling patterns and demand, the Transport Department said it was cancelling cross-harbour bus route 301 from May 15, and would also consider scrapping special departure bus services at the Cross-Harbour Tunnel in phases.

one of 10 MTR lines in Hong Kong. As the first railway in the city, it started operating in 1910 as the KCR British Section until 1996, and the KCR East Rail from 1996 to 2007. Construction of the 17km Sha Tin to Central rail link began in 2012 and full service of the link commenced on May 15. The railway line now starts at Admiralty station on Hong Kong Island and branches in the north at Sheung Shui to terminate at Lo Wu or Lok Ma Chau stations.

opened on May 15, this 6km section extends the existing East Rail Line across the harbour to Wan Chai North and Admiralty. It will extend the rail line to 46km through 16 stations.

includes information that enables commuters to check train arrival time, get an indication of how long they will have to wait to board a train, and how crowded each train car is

refers to cases of corner-cutting in construction. In 2019, the MTR Corp revealed that reinforcement bars from two Hung Hom station platforms for the Sha Tin-Central link were found to be substandard. The MTR Corp had to break open at least 80 sections of the new platforms to ensure its structural safety was not compromised.