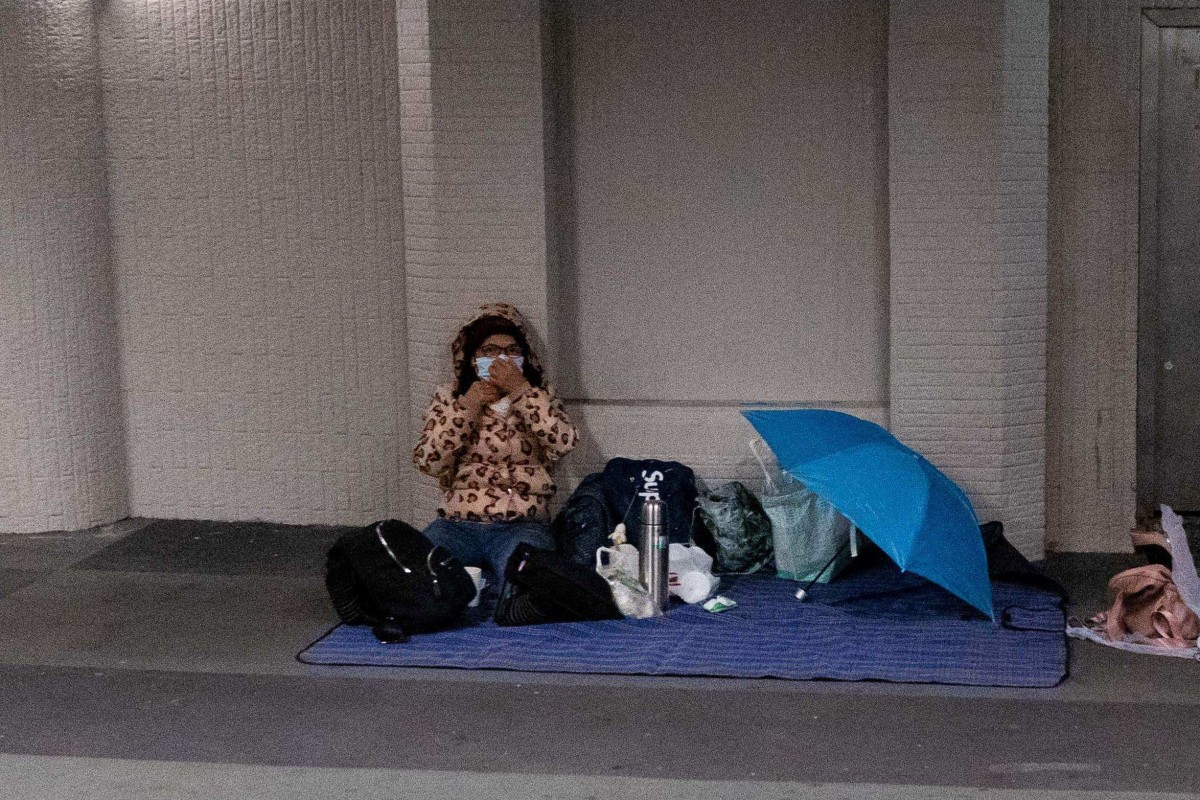 After testing positive for Covid-19, many domestic workers had nowhere to go when their employers did not allowed them to quarantine at home. Photo: AFP

After being suddenly laid off in February because of a Covid-19 infection, Julie*, a foreign domestic worker in Hong Kong, has been living hand to mouth with only HK$400 (US$51) left.

The single mother first arrived in the city in 2016, hoping to send remittances back home to the Philippines for her daughter and son.

Last September, when her employer immigrated to Canada, she started a new contract with a family of four.

But as the devastating fifth wave of Covid-19 brought the city to its knees, Julie became one of its victims.

“I received a message that I ... tested positive with the virus on February 11,” said the 38-year-old.

After she informed her employers about her infection, they immediately told her to quarantine in a hotel and not come home. Later, she received a message from them saying they had decided to terminate her contract, which still had 1½ years remaining.

“My employer said she’s scared of helpers because helpers bring viruses to the family,” Julie recalled.

After she recovered, she went to her employers’ residence to pack her things, only to discover that all of her belongings had been left outside the house. The family didn’t even allow her inside. The desperate helper cried as she begged her employers to let her stay, but to no avail.

“They said, “No, go back to the Philippines – no need to stay in Hong Kong’,” said Julie. “I don’t want to go back home because ... how about my kids? How about my family?”

Ever since her termination, Julie has been residing in a boarding house provided by a charity, Mission For Migrant Workers (MFMW).

The organisation said it was receiving three to five requests daily from infected migrant workers who were terminated or whose employers would not allow them to stay home.

While Julie scrapes by with help from friends and MFMW, what she needs is a steady pay cheque to send home.

“I’m still depressed because until now I have no work,” Julie lamented.

She used to earn about HK$5,000 (US$637) a month and regularly sent HK$4,200 to the Philippines to cover her daughter’s medical expenses and the tuition fees for both of her children.

“My daughter’s medicines cost more than HK$1,100 every month,” said the worried mother, explaining that her daughter suffered from heart problems. “[She] has stopped studying because I don’t have the money.”

The Labour Department told Young Post that the government would not tolerate any employers violating the Employment Ordinance by illegally dismissing domestic helpers who contracted Covid-19.

An employer who contravenes provisions in the ordinance commits an offence and is liable to prosecution and, upon conviction, to a maximum fine of HK$100,000.

Hot Topics: Domestic workers left out in the cold, nowhere to go

Employers who terminate a domestic helper’s contract without one month’s notice are required by the Labour Department to provide a month’s wages, annual leave pay, severance payment, food allowance and return passage.

“[The employer] only paid me HK$7,500 – one month’s salary and some money for the boarding house,” Julie said.

Julie added that her former employers refused to give her a release letter, which is needed for finding a new job. Thus, earlier this month, she filed a complaint with the Labour Department against her previous employers. But cases take time to process, and in the meantime, she is not allowed to work.

“Immigration told me I need to wait for the case to be completed before I find a new employer,” explained the domestic worker.

Foreign domestic helpers cannot work while waiting for a complaint with the Labour Department to process. Photo: Sam Tsang

Julie is not alone – many of Hong Kong’s 330,000 domestic workers have experienced similar situations in recent months amid the city’s disastrous fifth wave of infections.

Ann* is another domestic worker who had to stay in a shelter. When her employers left Hong Kong and ended her contract, they tried to make sure her needs were met.

But Ann was all alone when she contracted the coronavirus in mid-March.

“My employers paid the landlord to let me stay for one more week because I tested positive,” said the 58-year-old.

Despite the payment, the landlord evicted Ann on the very night that she tested positive for the virus.

“I didn’t know where to go,” she recalled – until a friend referred her to Bethune House, a shelter in Jordan for migrant women.

Why the city’s domestic workers are important

During that time, it took days for the government to transfer patients to isolation facilities, said Edwina Antonio-Santoyo, executive director of Bethune House.

“When the fifth wave hit, there was an increase of [helpers with] positive cases being terminated in the middle of the night, and some of them had to stay in the park,” she explained.

While the shelter in Jordan typically can accommodate about 22 women, more were coming for help – many arriving at midnight when they had nowhere to go after being fired.

“We don’t send people away. We squeezed them in,” the director said of the 1,000-sq-ft space. “Jordan became a holding area before we referred them to somewhere else.”

This was where Ann arrived after riding three taxis to travel from Yuen Long in the middle of the night. She was carrying three suitcases and feeling sick.

“She looked so tired and stressed,” said Josie*, a 58-year-old domestic helper who has been volunteering regularly at the shelter since last October.

Having heard countless stories of helpers in similar dire straits as Julie and Ann, Josie noted domestic workers deserved more help amid the chaos of the pandemic.

“The government should include us in the financial assistance related to Covid-19,” she said, adding that after 26 years in Hong Kong, she was only earning minimum wage – which, at HK$4,630 a month, is just HK$1,430 higher than it was 30 years ago.

Luckily for Ann, a single mum and sole provider for her family in the Philippines, she started a new job last month.

Should domestic workers be entitled to consumer vouchers?

As for Julie, her case hearing is set for next month. She wishes nothing more than to be finished with it, so she can earn money again.

“Every day when I call my family, I am worried about them,” the mother said tearfully.

From February to April, Bethune House provided a haven for more than 90 domestic workers who tested positive for the coronavirus. Even now, 37 are staying with them.

Antonio-Santoyo stressed the importance of helping these women who were in distress.

“They are the most vulnerable people during Covid because they don’t have a home for themselves,” she said.

In a way that satisfies only one's immediate needs, because of lack of money with which to make provision for the future.

A sum of money sent in payment or as a gift.

Bring something to its knees 受挫

Reduce someone or something to a state of weakness or submission.

A person who moves from one place to another, especially in order to find work or better living conditions.

Manage to live with difficulty.

Expel (someone) from a property, especially with the support of the law.

In a very bad or difficult situation.