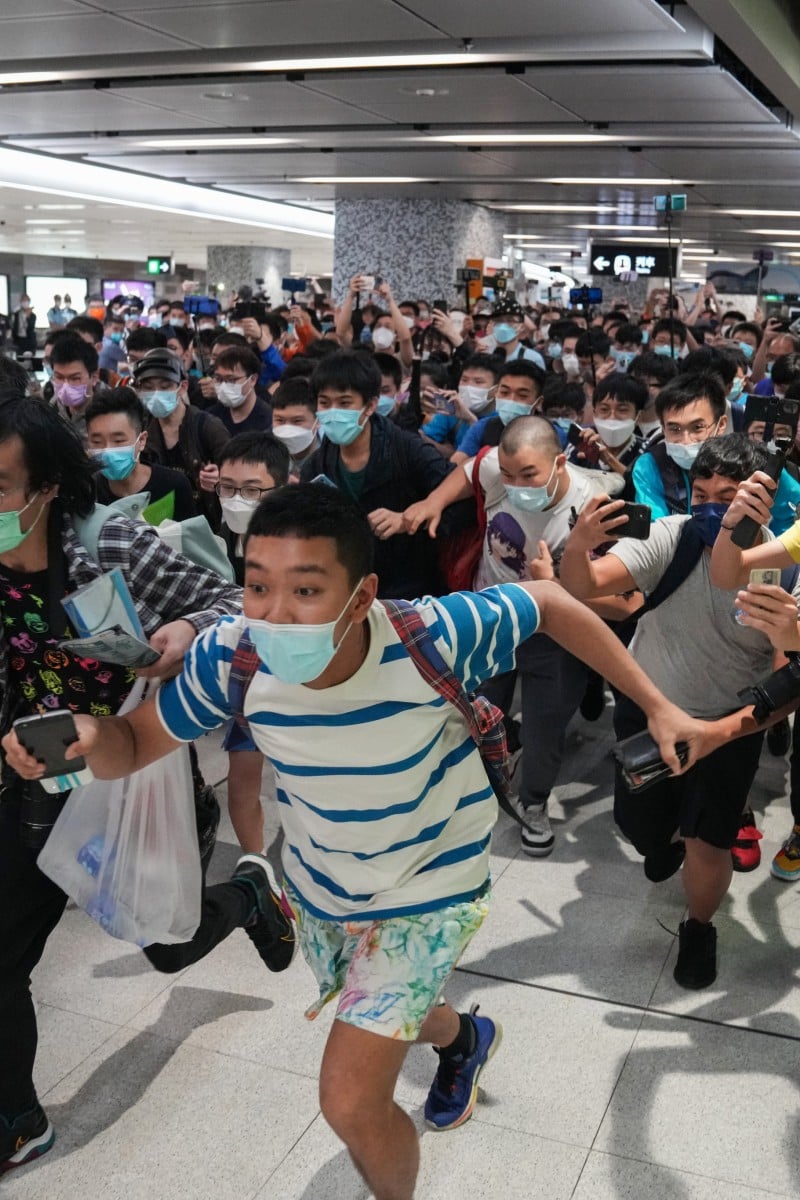 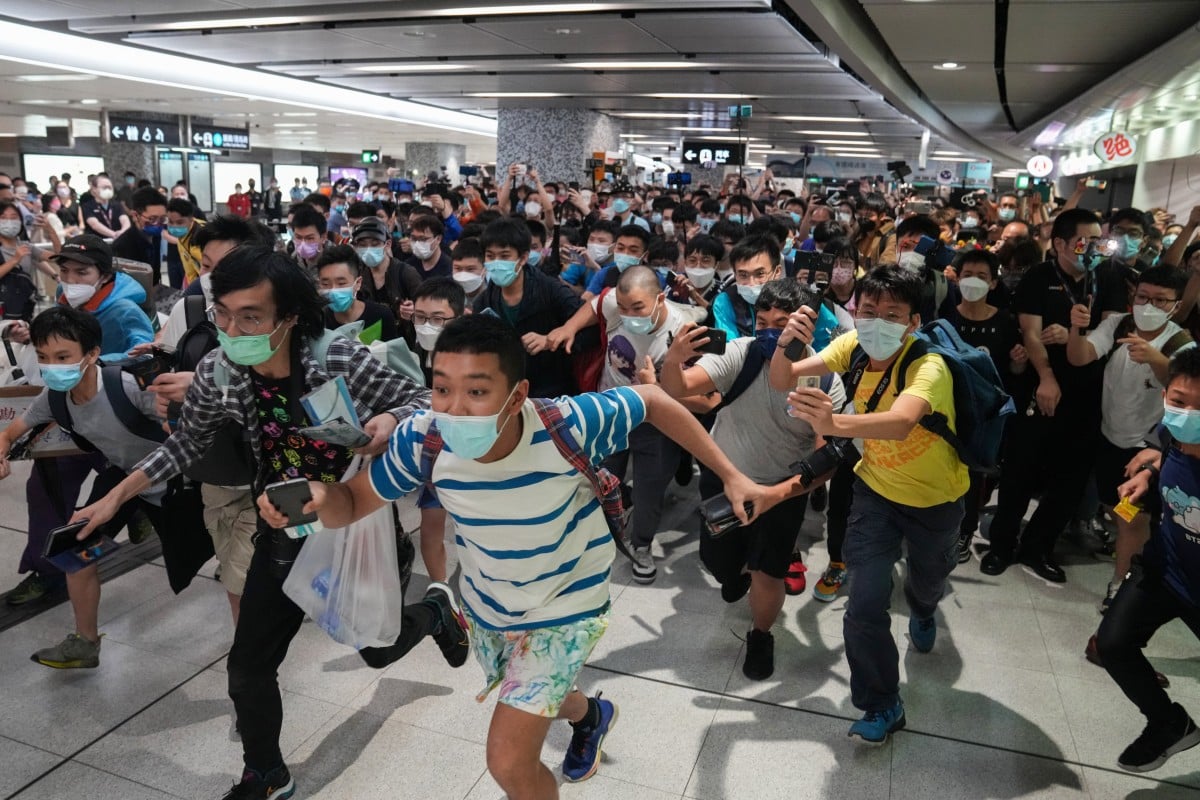 Thousands of railway fans rushed to board the first train at dawn on Sunday on a new cross-harbour section of Hong Kong’s costliest MTR project, with the long-awaited launch coming off years of repeated delays and cost overruns.

Despite the light rain, train enthusiasts had lined up overnight outside the entrance of Exhibition Centre station in north Wan Chai to be the first passengers on the stretch.

The Hung Hom-Admiralty section – via Exhibition Centre station in the Wan Chai North interchange – is more commonly known as the cross-harbour extension of the East Rail line. It is the fourth cross-harbour railway route connecting Hong Kong Island with Kowloon and the New Territories.

In the morning, eager residents armed with GoPro cameras, selfie sticks and railway memorabilia chanted “open the gates” and “let us in” as they waited for doors at the Exhibition Centre station to open at 4.35am. Once through, they dashed down to the platform for the first train set to depart at 5.30am.

Railway fan Jason Law, who became an internet sensation after he sang a song about the opening of the Tuen Ma line last year, was among those who queued overnight.

“I have been waiting for this day for so long. This is like a post-DSE gift from the MTR,” gushed the 17-year-old, who had just finished his Diploma of Secondary Education papers, or university entrance examination on Friday.

Enthusiasts had queued overnight to be among the first on the line. Photo: Sam Tsang

In anticipation of the opening of the Hung Hom-Admiralty section, the MTR Corporation had even produced a music video, Excited about Harbour Crossing on the East Rail, which was released on Thursday evening.

The number is a remake of folk song Greensleeves and features seven people from different sectors, including Canto-pop singer Stephanie Cheng and badminton Olympian Tse Ying-suet. Train enthusiast Law, who first sang about the Tuen Ma line to this tune, also made a cameo in the music video.

Students Donald Poon, 15, and Toto Leung, 14, were among the crowd rushing to the platform once gates opened. “We were taking photos of the last train at the old platform at Hung Hom at midnight. After that we came straight to queue up. We’re very excited about this historic moment,” said Donald, who brought along a foldable stool for the overnight wait.

Excited commuters took photos of the different features in the station, including the shell of a World War II bomb uncovered during the construction of the site.

Passengers cheered as the doors of the train closed, beginning their first journey across the harbour on the extension line.

Following the opening of the cross-harbour extension, the old platform at Hung Hom serving the East Rail line for the past 47 years will be decommissioned.

Commuters switching from the East Rail line to the Tuen Man line no longer have to walk three minutes across the station for their transfer. The new East Rail platforms are located one storey below those for the Tuen Ma line, easily accessible via escalators.

As part of the North-South rail corridor, passengers in northern Hong Kong can now travel across the harbour to reach the commercial and financial hubs in the Admiralty area without making transfers at Kowloon Tong or Mong Kok stations.

Passengers rushing to board the first train on the cross-harbour extension. Photo: Jelly Tse

The new section will extend the East Rail line to about 46km, with a total of 16 stations. Admiralty station has now become a mega interchange for four MTR lines – East Rail, Tsuen Wan, Island and South Island.

A trip from Admiralty across the harbour to Hung Hom takes approximately seven minutes, while it takes 13 minutes to travel to Kowloon Tong, a major interchange on the Kwun Tong line.

Amen Poon, 40, who stays in Tai Po, was accompanying his eight-year-old son on the cross-harbour extension from Admiralty station. Poon, who usually drives if he is travelling from the New Territories to Hong Kong Island, said he might switch to taking the East Rail line in the future.

“It is a lot more convenient. As for the delays, I am not surprised, construction projects always get delayed in Hong Kong. I’m just happy it’s finally up and running,” Poon said.

Lam Tin resident Danny Shum, 50, had travelled to Wan Chai to check out the new Exhibition Centre station. Although he usually uses the Tseung Kwan O line for harbour crossing, he is excited about the extension of the East Rail track.

“It’s quite a feat, because this railway is so historic, with over 100 years of history. It must have been very challenging for them to extend it across the harbour,” Shum said.

However, some commuters, such as minivan driver Cheung, who only gave his surname, still prefer taking cross-harbour buses from Hung Hom out of habit. Cheung lives in Tai Po and usually starts his shift in Causeway Bay.

“This is the most direct route. If I take the MTR, I will need to walk for a long distance. Switching between platforms is too confusing,” said the 70-year-old, who was waiting for a bus on route 112.

A kitchen assistant surnamed Chen said the bus lines outside the Hung Hom Cross-Harbour Tunnel were a lot shorter than usual on Sunday morning, after the opening of the rail extension.

“Usually the line for route 101 would be full of people, but today only five to six people are queuing up,” said the 61-year-old who works in Tin Hau. He is considering switching his commute to the MTR, but is unsure about navigating the interchange at Admiralty.

“With the fourth cross-harbour railway line, the public have more travel options from now on and a faster and more convenient service,” MTR Corp CEO Jacob Kam Chak-pui said.

To celebrate the extension of the East Rail line, the company will be giving away 100,000 free single-journey rides. Registered users of the MTR mobile application can log on from 2pm on May 31 to collect the free rides on a first-come, first-served basis.

The long-overdue opening of the Hung Hom-Admiralty section brought an end to a project plagued by construction delays, glitches and cost overruns.

The MTR Corp and its contractors were placed under investigation by a government-appointed commission of inquiry over shoddy construction work and cover-ups. The project ended up running HK$10 billion over its budget, costing HK$90.7 billion.