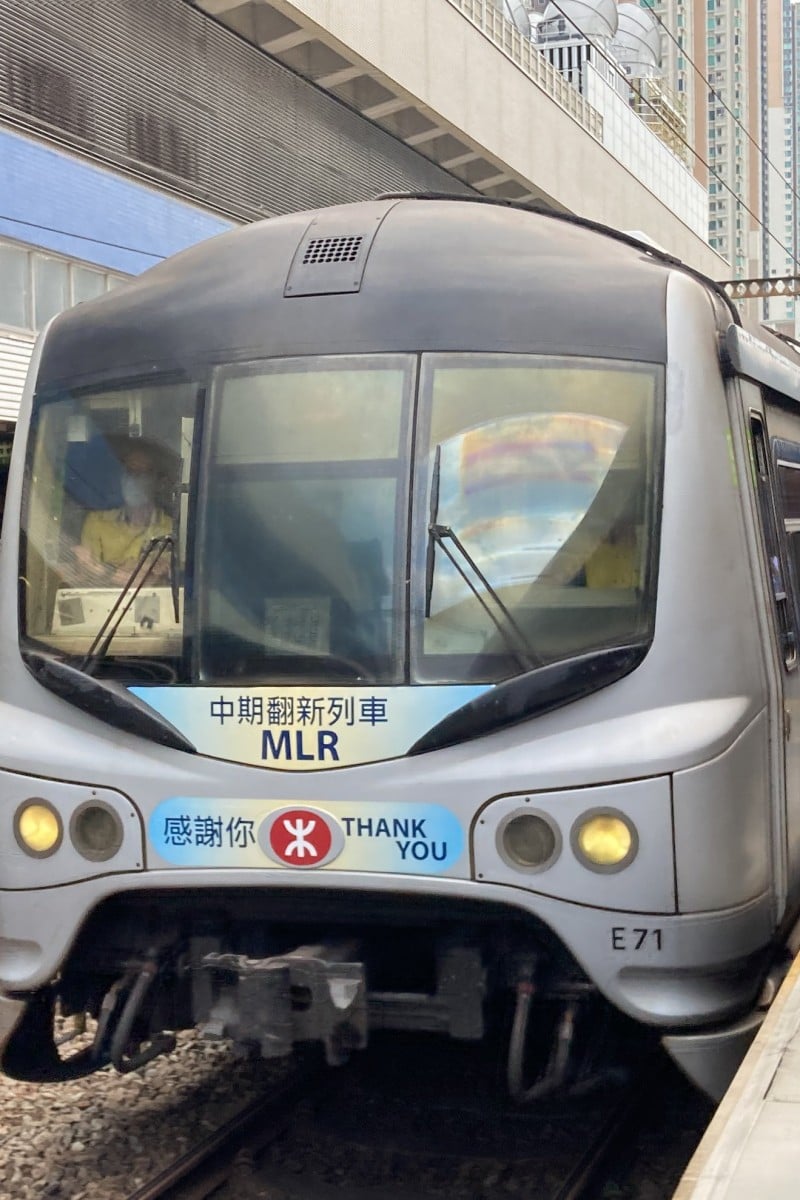 Goodbye to Hong Kong’s last 12-car train and its 40 years of history, as young railfans discuss its significance to the city On Sunday, the long-awaited cross-harbour extension of the East Rail line finally opened to the public, though it left behind one of the city’s most cherished train models.

Two weeks before the launch of the new Hung Hom to Admiralty section, hundreds of Hong Kong train buffs gathered to bid farewell to the East Rail line’s Mid-Life Refurbishment (MLR) train, which has served the city for 40 years.

The 12-car train, nicknamed “fly-headed” because it resembles the insect, has been part of Hong Kong transport since British colonial rule.

Here is what you should know about the historic train and how the city’s young railway enthusiasts see its retirement.

What’s the history of the MLR train?

Launched in 1982, the trains were ordered by British officials during the revitalisation of the KCR British section, which is now known as the East Rail line.

During those early days of powering trains with electricity instead of fossil fuels, these first-generation electrified trains would sometimes suffer from temporary loss of power.

KCR train services were suspended for more than two hours at Kowloon Tong Station in November 1984 because of its fragile overhead cable supply system. Photo: SCMP

From 1996 to 1999, the train underwent its mid-life refurbishment, resulting in major changes in design and functionality. Some of these features have been passed on to the current 9-car trains.

For example, the car’s interior included longitudinal benches that gave passengers more room to stand, while still providing others with seats.

The MLR trains were fitted with new passenger information systems, including multicolour LED signs displaying the train destination, the next station, safety guidelines, time and temperature. Mounted above windows, they also had 22-inch LCD screens broadcasting news from Cable TV Hong Kong, as well as advertisements.

Why was the MLR train retired?

Upon the full opening of the Central-Sha Tin link in May, the four-decade-old MLR train did not have the necessary capacity and technology to support the expanded East Rail line.

On May 6, the MLR train made its last trip, departing from Sha Tin to Hung Hom, with fans on board to enjoy the ride. The MTR Corporation hosted an event for enthusiasts, with a special broadcast informing fans of the MLR train’s rich history, and noting that the ride would be the train’s final mission.

Train enthusiasts take pictures on the last day of the 12-car train on the East Rail line. Photo: Dickson Lee

Where will the retired trains go?

A company spokesman told the Post last year that it was exploring the possibility of donating the trains to the community and had already given a carriage to the Fire Services Department to use for training.

He added that a contractor chosen by open tender to dispose of the trains had been told to remove spare parts for recycling and ensure that the disposal process complied with environmental laws and guidelines.

The MLR train’s handrail rings were also being converted into fitness equipment and safety equipment for the elderly, Chinese news outlets reported in March.

One of the original electrified trains from the 1980s is stored at Ho Tung Lau Depot, next to Fo Tan station.

What do students think of the MLR train’s retirement?

Ezra Lau, a Year Nine student at Island School and train enthusiast at the May 6 event, said he would miss the MLR train but was excited for the new cross-harbour extension of the East Rail line.

“The MLR train is the symbol of Hong Kong and its people, and has maintained a close relationship with the railfans,” the 13-year-old said, adding that the event allowed train buffs to take photos and cherish memories of the train one last time.

“[The] colourful red and blue livery, the vertically-placed seats and the overall suburban feel of the train will be dearly missed by the Hong Kong public for years to come.”

Many of Hong Kong’s train buffs gather for a final farewell to the city’s red and blue MLR trains. Photo: Dickson Lee

Samuel Lai, also a Year Nine student at Island School, agreed, saying that the train was an integral part of his childhood in the city.

“Since most young railfans like Ezra and I were born ... when MLR was at its peak, we have begun to see it as a friend in Hong Kong,” said the 13-year-old. “It is now carved into the history of ... [the city’s] train fleet.”

They recalled how hundreds of other train buffs congregated on the platform, taking photos and cheering as the trains pulled into view.

Samuel noted, “The space around us was packed to the max, and I didn’t have space to even turn around. I did foresee that the platform would be very busy, but I had no idea it would be this busy.”

“The entire platform was crowded with people trying to get into the train. I just barely got in ... but I feel the experience was worth it,” Ezra said.