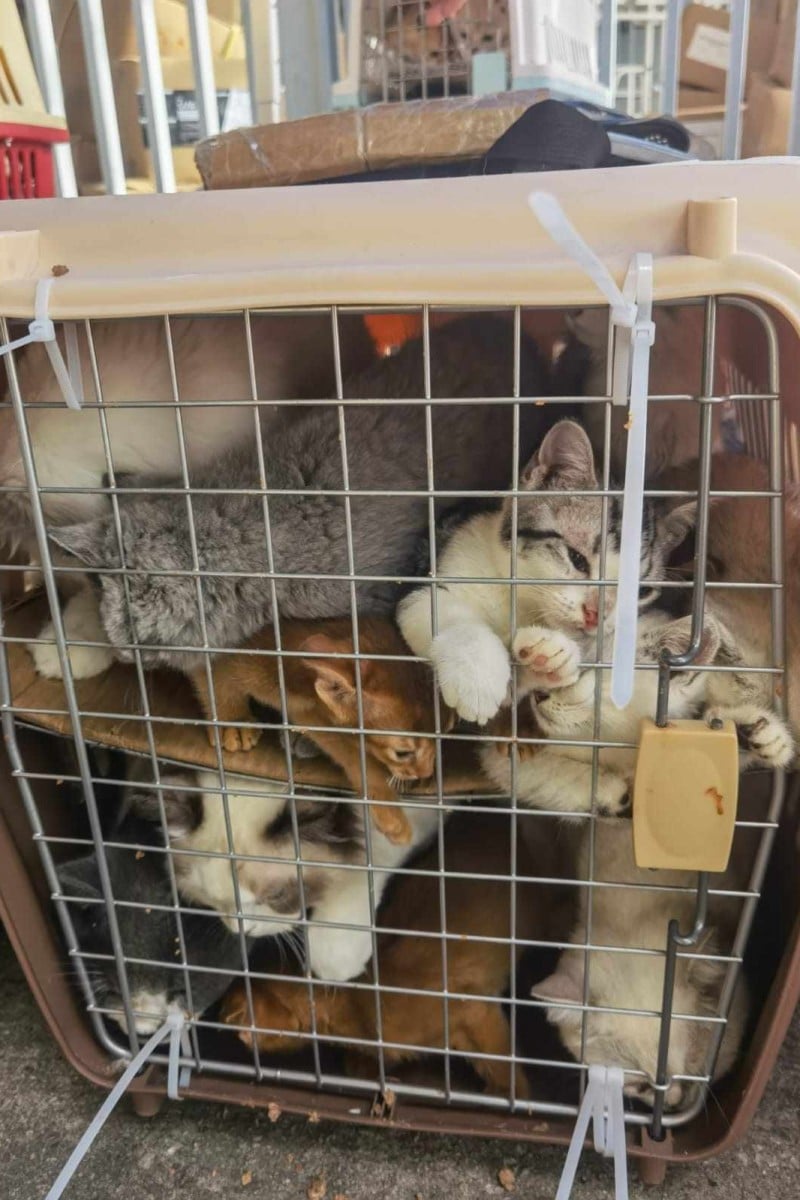 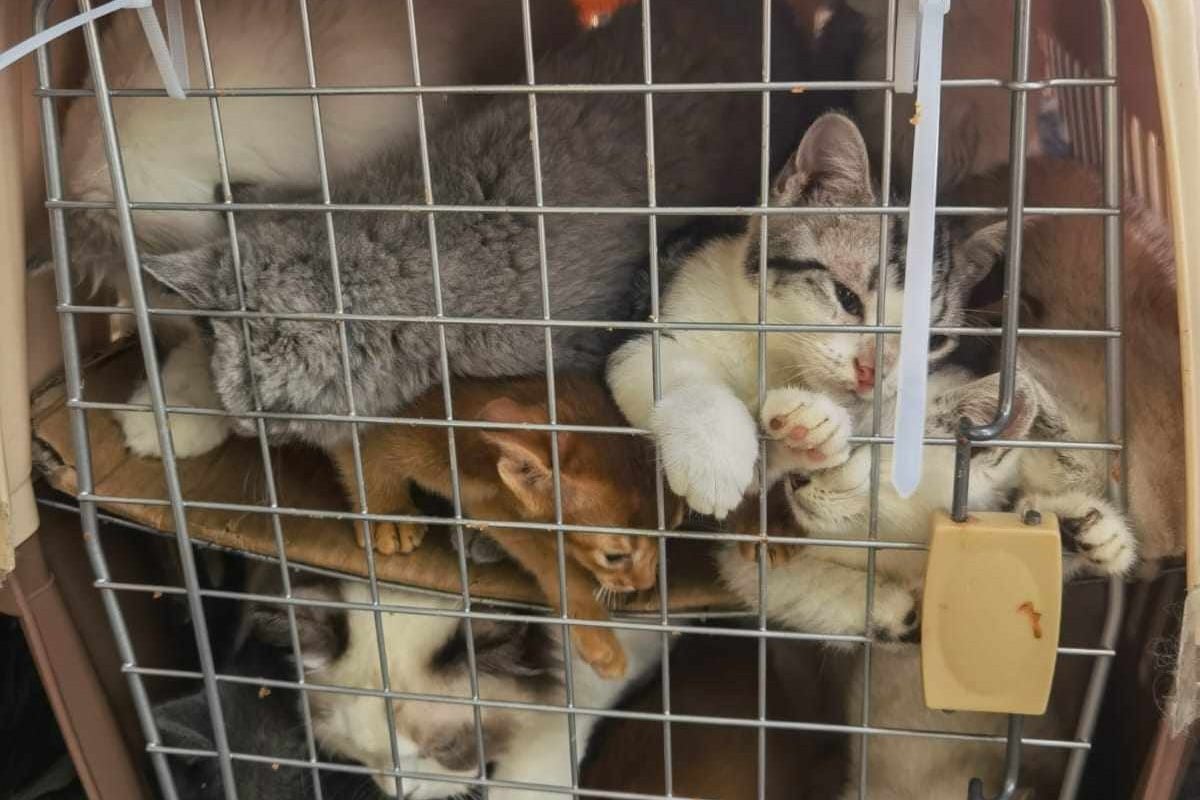 More than 130 pedigree kittens and puppies, smuggled from mainland China, were confiscated aboard a speedboat in Hong Kong waters around Wednesday at midnight. Photo: SCMP

More than 130 pedigree kittens and puppies illegally shipped from mainland China have been confiscated from a speedboat operating in Hong Kong waters, making it the city’s largest seizure of pets in an anti-smuggling operation.

The 101 kittens and 35 puppies, all expensive breeds, were found inside 17 plastic crates on the speedboat which was intercepted off Black Point in Tuen Mun late on Wednesday, following a high-speed chase with police in northwestern waters.

During the joint operation mounted by police and customs, a 30-year-old man alone in the 10-metre-long boat was arrested aboard the vessel.

“We found 16 cats crammed in one of the crates. The quantity is staggering,” Senior Inspector Yung Kam-lun of the force’s small boat division said on Thursday, adding that an initial examination indicated all the animals were in good health.

According to Senior Inspector Tang Sau-yin of customs’ marine enforcement group, the animals were either bought online before being smuggled from the mainland for buyers to keep as pets in Hong Kong or they were bound for shops to be sold in the city. He said the haul was estimated to be worth more than HK$1.4 million.

Senior Inspector Chan Ling of the marine regional crime unit said the animals could each fetch between HK$10,000 and HK$15,000 locally.

All the animals were handed over to the Agriculture, Fisheries and Conservation Department and the Society for the Prevention of Cruelty to Animals. Photo: SCMP

He said an investigation was under way and further arrests had not been ruled out.

A source said all the kittens and puppies were well-known breeds and some of them were a few months old.

The source said it was the largest seizure of pets in terms of quantity in a single anti-smuggling operation.

Before you get a pet, make sure you’ll always love it

The kittens and puppies were handed over to the Agriculture, Fisheries and Conservation Department and the Society for the Prevention of Cruelty to Animals.

According to the force, the speedboat with an outboard engine entered Hong Kong’s northwestern waters near Sha Chau at 11.50pm on Wednesday. Two police pursuit boats were deployed to intercept it.

“During the pursuit, it swerved several times in an attempt to escape,” Yung said.

After a five-minute pursuit, the boat was eventually intercepted off Black Point.

The suspect was detained on suspicion of importing unmanifested cargo, animal cruelty and endangering the safety of others at sea. As of Thursday afternoon, he was still being held for questioning and had not been charged.

The source said he believed the suspect was paid to go to the mainland, probably Shekou, to pick up the animals.

101 kittens and 35 puppies, all expensive breeds, were found inside 17 plastic crates on a speedboat which was intercepted off Black Point in Tuen Mun, following a high-speed sea chase with police northwest of the city. Photo: SCMP

A spokesman for the Society for the Prevention of Cruelty to Animals (SPCA) said it had received a call from law enforcement on Wednesday night about a suspected smuggling case in which a total of 136 cats and dogs had been seized.

Inspectors from the society arrived at the scene and found the animals crammed inside small cages. They also helped with the handling of the cats and dogs by providing food, water and cages, he said.

After the animals underwent a preliminary examination by veterinary surgeons from the Agriculture, Fisheries and Conservation Department, the society said it had collected 12 dogs and 35 cats on Thursday.

The spokesman said the animals would be available for adoption once the relevant legal procedures were completed and following a minimum quarantine period of four months. He said the group would provide daily care and medical treatments for the cats and dogs until it received further notice from law enforcement agencies.

“As the SPCA received an overwhelming amount of inquiries on this case, we advise members of the public to get the most updated information about this case via news and credible sources,” the spokesman said.

“The animals are being well cared for and we appreciate the concern. We ask for your patience and refrain from overloading our hotline with inquiries, which may affect emergency calls for other animals in urgent need of assistance.”

A previous haul of pedigree animals from the mainland was seized in January when 30 kittens and seven puppies were confiscated along with HK$4.1 million worth of contraband comprising frozen bull penis and deer tails at the Ha Pak Lai coastal area in Yuen Long in an anti-smuggling operation.

The animals were smuggled into the city from the mainland while the frozen goods were headed across the border.

The January bust was the second seizure of pedigree pets in three weeks. On December 15, a policeman drew his gun but failed to stop a suspected smuggler from fleeing in a delivery van during an operation in which officers confiscated 52 kittens and puppies, also in Ha Pak Lai.