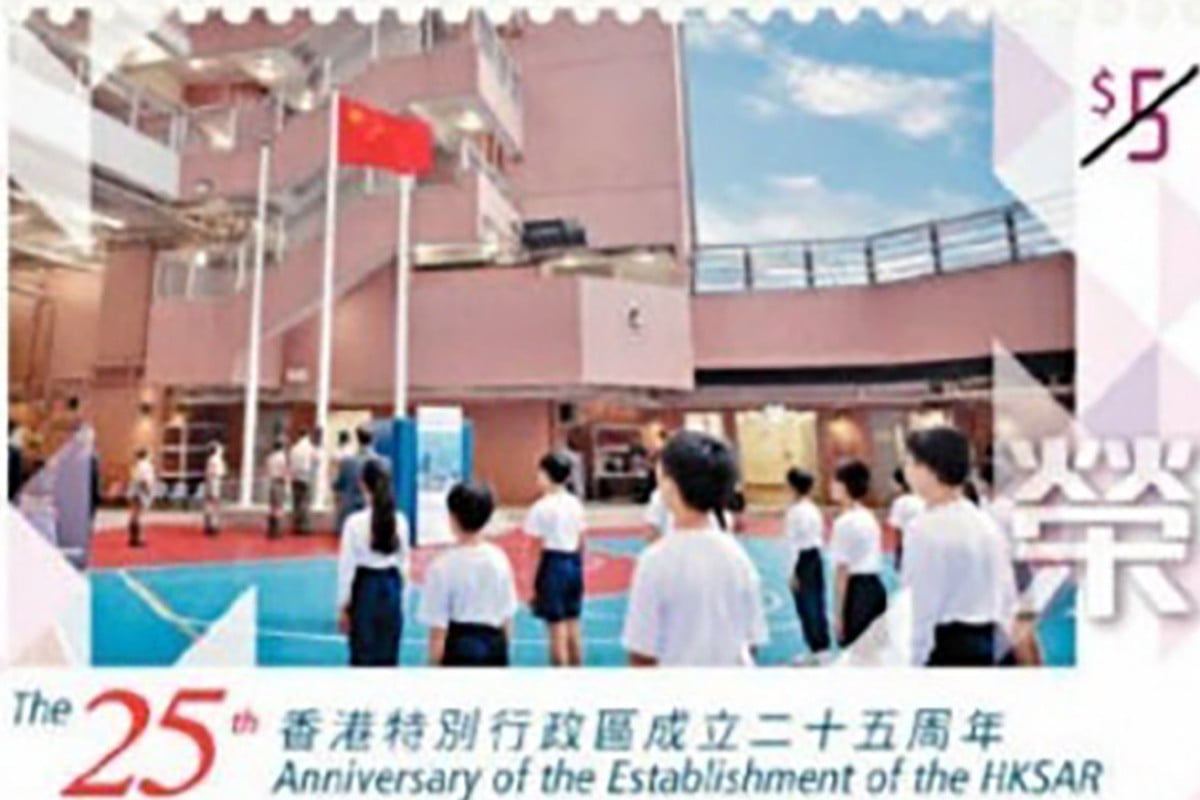 One of Hongkong Post’s four stamps to commemorate the handover. Photo: Handout

Hongkong Post has changed the uniforms of pupils shown in a photo on a stamp marking the city’s 25th handover anniversary from yellow to white.

Yellow has been closely associated with the city’s pro-democracy movement and the widespread protests that rocked the city in 2019, which led Beijing to impose a national security law in 2020.

Hongkong Post on Sunday said the alterations were made for “aesthetic purposes” and to make the colours in the whole stamp series “more harmonised and standardised”.

A font of its own: Hong Kong designer hopes to preserve Cantonese with new font set for traditional Chinese characters

The government agency announced the set of four stamps on Saturday.

Titled the 25th Anniversary of the Establishment of the HKSAR and emblazoned with a traditional Chinese character that together reads “prosperity and stability”, the photos chosen include images of the Legislative Council and Golden Bauhinia Square. The set will be released on the handover anniversary on July 1.

But it soon emerged that one photo, showcasing a flag-raising ceremony at a primary school attended by Secretary for Education Kevin Yeung Yun-hung on National Security Education Day last year, was doctored, with pupils’ uniform colour changed, the draped national flag on a pole replaced with a waving one, and nearby buildings taken away in favour of a blue sky.

Hongkong Post said the design idea came from the implementation of the national security law and the “improvement of the electoral system”, as well as the long-term development of the “one country, two systems” principle that governs relations between the city and the central government.

Cheung Yung-pong, principal of the S.K.H. St. James’ Primary School where the photo was taken, said he only learned about it being used in the commemorative series from the press.

“It was an honour that the photo was chosen … I would respect the designer’s work [in terms of the altered uniform],” he said.

Other stamps revealed by Hongkong Post on Saturday included one dedicated to the Chinese People’s Liberation Army in Hong Kong to mark its 25th anniversary of being stationed in the city, also to be released on July 1.

Series related to local culture will be released in the latter half of this year, including a collection centred on the cheongsam, the traditional clothing for Chinese women and an intangible cultural heritage of the city.