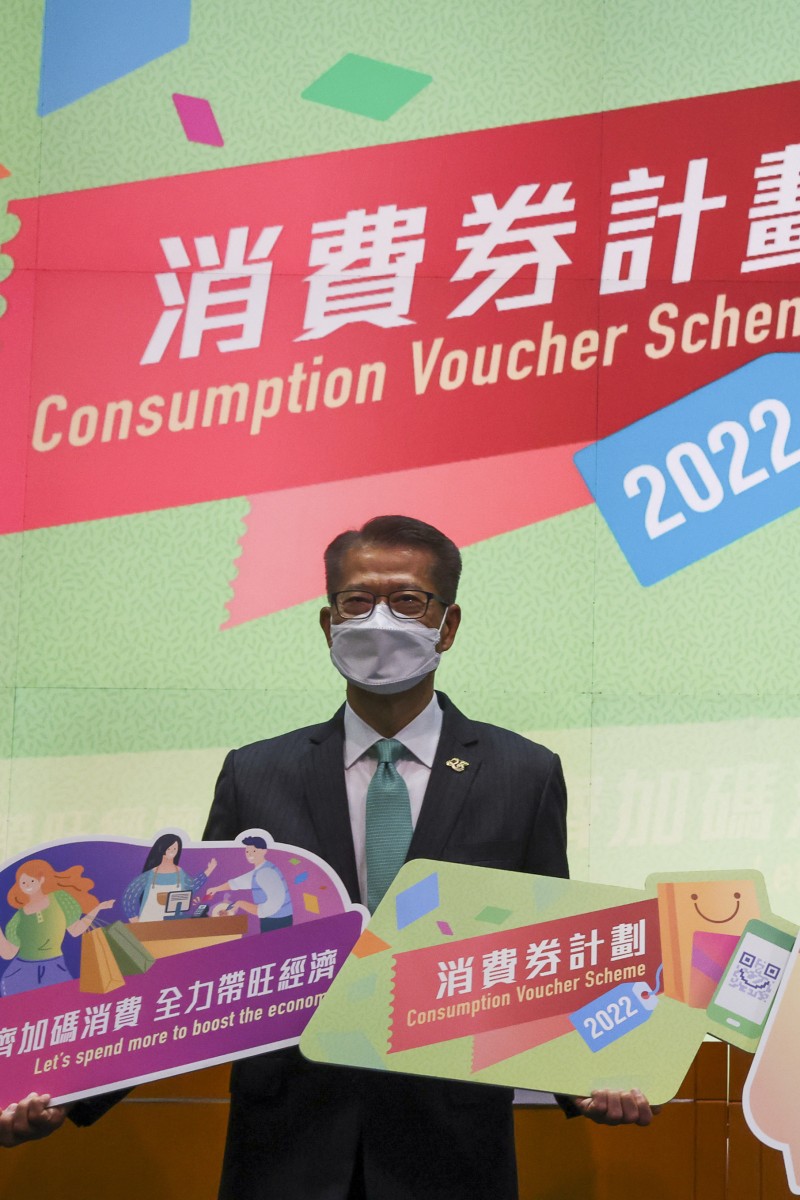 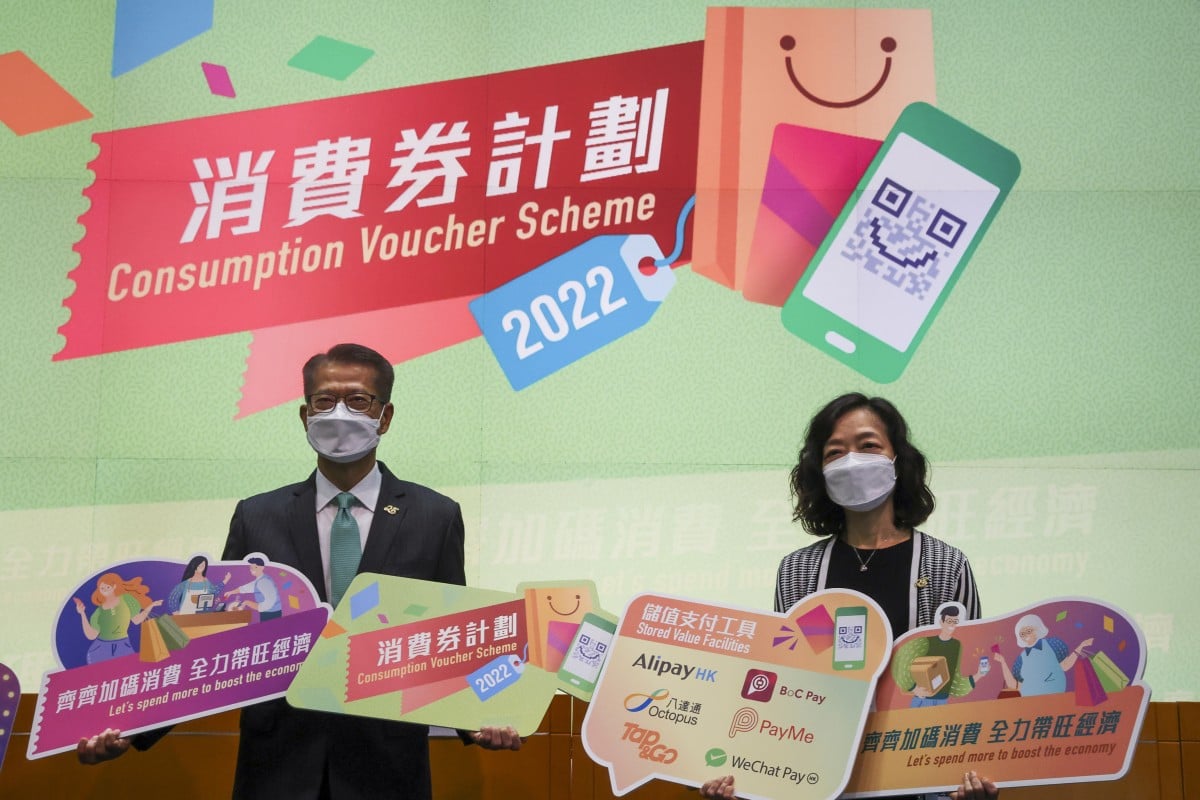 The Hong Kong government will hand out a second batch of HK$5,000 (US$637) in consumption vouchers from August 7. The first round of the same amount was distributed in April to more than 6.3 million residents.

Hong Kong permanent residents aged 18 and above are entitled to collect the vouchers. The government has also extended the scheme to cover people in Hong Kong who are eligible for permanent residency. But it has excluded locals who are planning to emigrate.

For those in Hong Kong eligible for permanent residency, no minimum period of stay will be required for eligibility. But they will receive only HK$5,000, which is half of the scheme’s total amount.

People who have been absent from Hong Kong for three consecutive years between June 18, 2019, and June 22 this year without specific reasons will be excluded from the scheme.

The Hong Kong government will hand out a second batch of HK$5,000 in consumption vouchers from August 7. Photo: K.Y. Cheng

Residents with specific reasons for remaining outside the city will still qualify. This includes, for example, elderly Hongkongers living in Guangdong or Fujian province under officially recognised retirement schemes. Other exceptions include those who have left the city for study or work.

The government estimated in March that the HK$10,000 e-vouchers would boost the economy by 1.2 per cent.

After the government handed out the first round of consumption vouchers in April, retail sales rose by 11.7 per cent year on year. This ended a two-month decline. The total monthly sales value also increased to HK$30 billion. Of that amount, sales of electrical appliances and other consumer durables surged by more than 40 per cent.

Billy Mak Sui-choi, associate professor at Baptist University’s department of finance and decision sciences, said the second batch of e-vouchers would have more positive effects than the first round. This is because the Covid-19 situation has calmed down compared to April.

Financial Secretary Paul Chan Mo-po early this month said the broader eligibility criteria for the second round of consumption e-vouchers to include people in Hong Kong eligible for permanent residency would add about 300,000 people to the scheme, many of them entrepreneurs and students.

This will also increase the overall cost of the handouts by between HK$1.5 billion (US$191 million) to HK$1.7 billion, which he called an “affordable” amount.

The revamped eligibility requirements, while welcomed by many, left some residents who had moved overseas feeling bitter.

The new eligibility requirements allow many who are not Hong Kong permanent residents to collect the government’s e-vouchers. Photo: Jonathan Wong

Retired university professor Kenndall Wong, who moved to Britain in August last year, said the exclusion was “unfair”. Wong, 53, said he did not close out his pension accounts in Hong Kong as he was uncertain whether he could become a naturalised citizen in Britain.

“The Hong Kong government has no right to deprive me of the privilege that other taxpayers deserve,” he said.

Zhou Shenji, a 30-year-old doctoral candidate who came to Hong Kong from mainland China in 2019, said he was happy with the government’s new arrangement, which made him feel seen.

“I have lived in Hong Kong for three years, and I have contributed to the city’s consumption,” he said. “The new arrangement is the acknowledgement of my staying here.”

Brain Game: What should adults avoid wasting their e-vouchers on?

Lawmakers such as Wendy Hong Wen also welcomed the government’s decision, saying it could help the city attract and retain talent from the mainland and elsewhere.

“We are suffering from a brain drain in a variety of industries. As the city is under post-pandemic reconstruction, we need talent urgently,” Hong said.

Lawmaker Gary Chan Hak-kan said he also supported the new arrangement in principle, adding that it was a “good use of taxpayers’ money”.

“In the past, the emigration wave was not as severe, so the government was loose about such regulations,” he said. “But now, the situation is different. It is a universally applied rule that only citizens or permanent residents are eligible to obtain such privilege. Otherwise, it’d be unfair to Hong Kong taxpayers.”

Migrant workers’ groups have slammed the Hong Kong government for excluding some 400,000 domestic helpers in the second disbursement of HK$5,000 in consumption vouchers after authorities said they did not have enough financial resources to cover the community.

Eman Villanueva, a spokesman for the Asian Migrants’ Coordinating Body, said the union had appealed to authorities to provide more financial aid to helpers since the onset of the pandemic.

“I think it’s a pattern that shows how the Hong Kong government treats domestic helpers. They always claim we are part of Hong Kong society and recognise our contribution, but it’s all lip service,” he said. “They don’t walk the talk. We feel it’s all hypocritical.”

Under the pandemic, many domestic workers have faced tougher working conditions as their employers work from home and children attend online school. Photo: Xiaomei Chen

Johannie Tong Hiu-yan, from advocacy group Mission for Migrant Workers, said helpers faced high financial and mental health stresses as they worried about losing their jobs and supporting their families during the pandemic.

Government officials defended the eligibility criteria. Jessie Wong Hok-ling, head of the budget and tax policy unit at the Financial Secretary’s Office, told a radio programme that helpers were not included in the scheme because of authorities’ financial commitments.

“If our goal was to purely boost consumption, this could have been achieved by having no limitation on age and other elements,” she said.

However, Villanueva said the policy should be geared towards providing support to those who needed it.

“I don’t think this is about residency issues, it’s about fair treatment,” he said, noting helpers contributed to the local economy by spending part of their salaries in the city.

In 2018, Hong Kong’s domestic workers contributed an estimated US$12.6 billion (HK$98.9 billion) to the city’s economy, and they enabled more than 110,000 mothers to rejoin the workforce, according to a study commissioned by Experian, a global information services company, in partnership with Hong Kong-based charity Enrich.

the scheme first introduced last year in a bid to boost the city’s economy amid the Covid-19 pandemic, with each eligible resident receiving e-coupons worth HK$5,000. The second iteration of the scheme doubled the amount to HK$10,000 and split it into two batches to be distributed from April 7 and August 7.

refers to individuals who plan to leave Hong Kong. One factor the government will check is whether someone has submitted a request to withdraw money from their Mandatory Provident Fund or benefits under Occupational Retirement Schemes before the age of 65, and if they have made a declaration to leave permanently when submitting these requests.