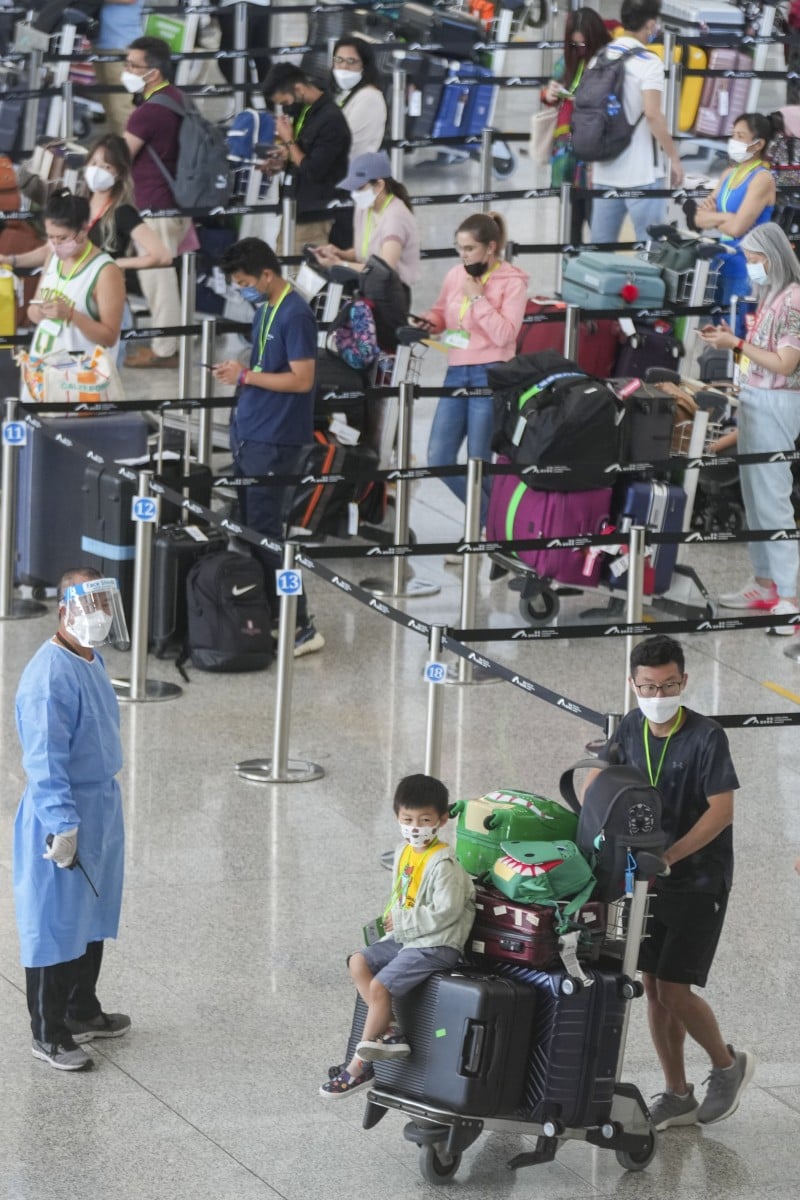 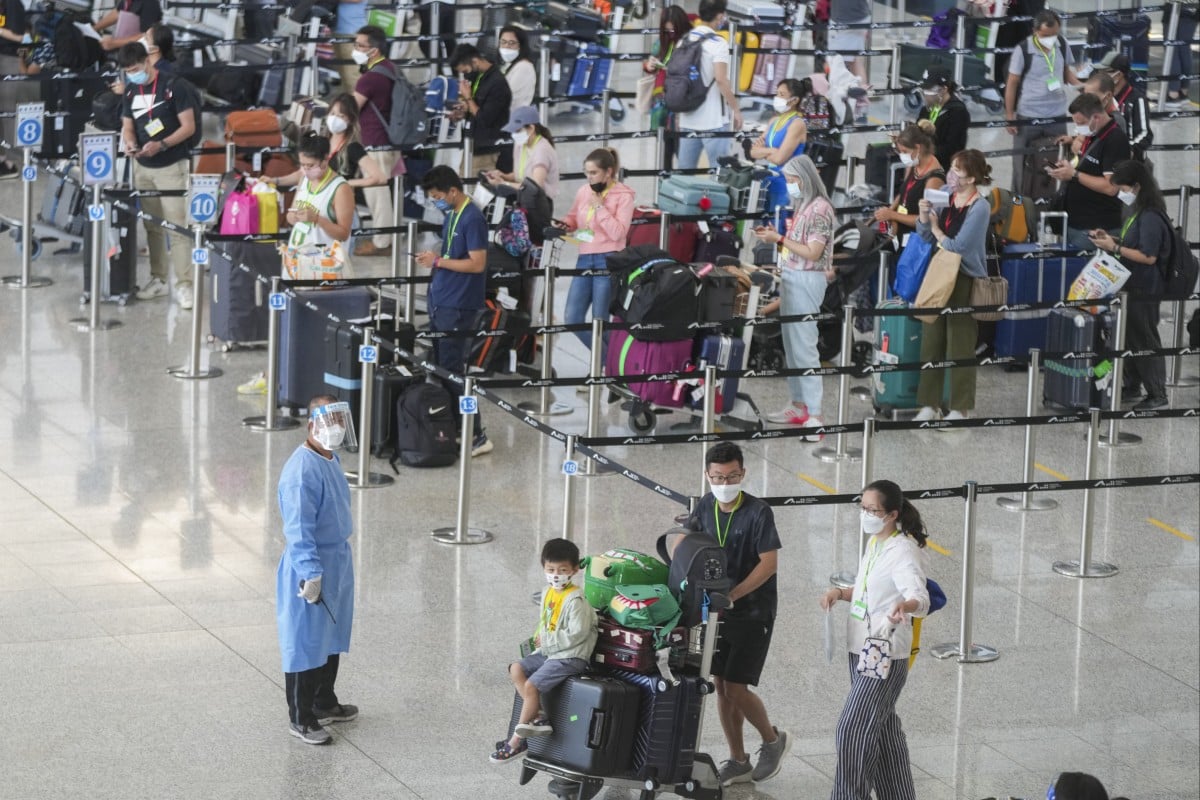 Arrivals at Hong Kong’s airport wait to be taken to their quarantine hotels. Photo: Sam Tsang

Hong Kong is easing Covid-19 entry rules for international arrivals from Friday, requiring them to remain in a hotel for three days before undergoing four days of “home medical surveillance” that will allow limited movement into areas where vaccine pass checks are not mandatory.

The long-awaited cut from seven days of mandatory quarantine in a designated hotel was announced at the same time as the launch of a mainland China-style, two-colour health code, following a high-level meeting of top officials last Wednesday.

Current rules require travellers to spend a week in quarantine at a designated hotel of their choice.

Under the revised scheme, overseas travellers have to complete three days of quarantine in hotels, and serve the remainder of their isolation at home or also in a hotel. However, they will be allowed to leave their home or hotels in the last four days, but not to places that require using the “Leave Home Safe” app residents use to show their vaccination status for entry to most public premises, such as restaurants and bars.

They are also banned from entering elderly homes, schools, homes for disabled persons and designated medical venues, as well as from joining any mask-off activities. If travellers test negative daily through rapid kits during the four days, they can also take public transport, attend work and go to shopping centres.

Unlike in some places in mainland China, which has a similar system, the code will not cover close contacts of Covid-19 patients, as officials had previously signalled. It will be linked with the existing “Leave Home Safe” app.

Hong Kong health officials have been warning that daily Covid-19 caseloads could double to 8,000 in the coming weeks. Authorities earlier lifted a “circuit breaker” mechanism applied to airline routes. Flight routes were previously suspended based on a threshold of infected passengers brought in.

Technology secretary Sun Dong said under the new policy, the “Leave Home Safe” had to be updated. Those infected will be issued a red code automatically, while those under home-based medical surveillance will get a yellow code. Incoming travellers have to download the app when they arrive in the city.

Sun added that the app had been popular since it was rolled out, as it was downloaded 8.4 million times, and used by 133,000 businesses.

Tony Wong Chi-kwong, deputy government chief information officer, added that if an infected patient’s phone was not connected to the internet, such users might still see a blue code on their phone.

But the scanners at premises requiring the vaccine pass could also identify these patients and remind them that they need internet connection to update their health code to red.

What about reopening the border with mainland China?

Asked if the further shortening of quarantine for international travellers meant there was no chance for border reopening with mainland China, Chief Executive John Lee Ka-chiu said the two were not contradictory. Lee said his government was still working hard on this front, but the city needed to respect the “7+3” quarantine measure in China, referring to seven days of hotel quarantine and three days of home medical surveillance on the mainland.

“When we discuss how we can minimise inconvenience for people travelling back and forth to the mainland, we also need to make sure that we are not passing the risks of transmission to our mainland counterparts,” Lee said. “For me, I will concentrate on how to minimise the inconvenience.”

Lo said according to data collected from July 8 to 14, about 50 per cent of imported cases were uncovered through PCR tests at the airport. The percentage increased to 80 per cent if taking into account PCR tests conducted after two days for guests in hotel quarantine.

Among those 40 cases, 20 were detected at the airport, 12 more were uncovered at quarantine hotels after two days, while only eight cases out of the 1,000 arrivals, or 1 per cent, were detected on the third day or after.

Lo said the figures showed most of the cases could be intercepted in the first three days of hotel quarantine, proving that the current week-long system was not cost-effective and “would affect the city’s connection with the international world”.

More on the red and yellow colour codes

Health minister Lo Chung-mau said a two-colour code system would be implemented alongside the new quarantine arrangements. A red code will be given to all infected patients, while incoming travellers will get a yellow code until they finish the “3+4” quarantine period.

If a traveller tests negative via PCR screening on the third day, he or she will be allowed to leave their designated hotel at 9am the next morning and complete the remainder of the isolation at home.

Overseas travellers must then take daily rapid antigen tests until the tenth day of their arrival, and a polymerase chain reaction (PCR) test on the first, second, fourth, sixth, and ninth days. The yellow code will be activated on the fourth to seventh day.

First, it will not be a “laid-back” approach as the healthcare system has to cope with the increase in number of infections.

Third, the administration will seek to balance risk and economic momentum to ensure people’s livelihoods.

Fifth, high-risk groups such as elderly, children and those with chronic diseases will be protected.