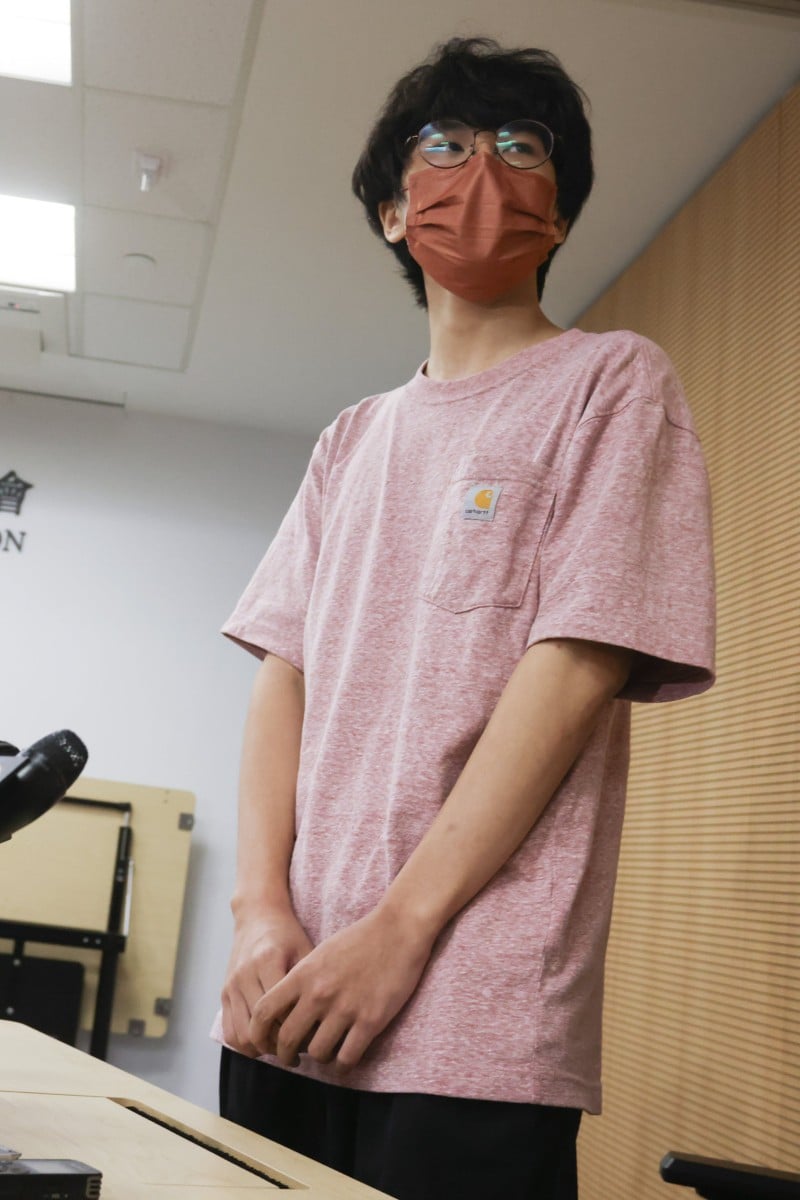 Nathan Lam Chak-chun speaks to the press after her meeting with the Equal Opportunities Commission in Wong Chuk Hang. Photo: Jonathan Wong

A teenager in Hong Kong who says she experiences gender dysphoria has not ruled out taking legal action against her school’s long hair ban for male students, after finding the first conciliation session arranged by the city’s equality watchdog “unsatisfactory”.

Nathan Lam Chak-chun, who uses “she” and “her” pronouns, attended a two-hour mediation meeting with the principal of Tung Wah Group of Hospitals Wong Fut Nam College in Kowloon Tong on Thursday. The 17-year-old, who was accompanied by her mother, said she did not feel the session arranged by the Equal Opportunities Commission (EOC) was helpful.

“The meeting was not to my expectations … I can only say I am dissatisfied with the school’s proposal,” she said, but stopped short of providing further details citing confidentiality of the session. “Our opinions remain divided.”

The Form Six student says she has gender dysphoria, a mismatch between a person’s sex assigned at birth and their gender identity, and had lodged a complaint to the EOC in July. She made waves in July when a video she posted on Instagram went viral, drawing more than 680,000 views.

In it, she revealed she was challenging her school’s ban on long hair for male students, calling the rule “unreasonable and outdated” and said it violated the Sex Discrimination Ordinance.

Before the meeting on Thursday, Nathan told the SCMP that she expected the school to offer an exemption for her to keep her long hair, but made it clear that she would not accept it because her goal was to have the rule abolished altogether.

Nathan Lam Chak-chun speaks to the press after her meeting with the Equal Opportunities Commission. Photo: Jonathan Wong

She came out of the meeting saying she did not look forward to another session and might instead consider taking legal action against her school.

She noted that the prolonged mediation process – the first meeting took two months to be arranged – had affected her preparation for the public examination next year, adding she was not optimistic both sides could reach an agreement before her graduation next year.

“It’s really hard. It’s really a difficult thing. These two months had been really tough for me,” she said. “I believe that the school will not make a concession. I have been consulting legal experts for their opinion on ways to speed up the process.”

The first mediation session arranged by the EOC was originally slated for August, but was postponed after the school principal said the school needed more time to seek legal advice.

Nathan said she was told having long hair would affect the school’s reputation, and threatened that she could be barred from school activities or even be suspended as punishment, allegations the school denied on Thursday.

She was forced to cut her hair three months ago.

Meanwhile, principal Lee Ching-pong said both sides had “pleasant” and “effective” communication in the meeting. He would only reveal that the school offered discretion to Nathan and would continue to provide her with professional emotional and psychological support.

“We will offer discretion based on professional advice. Our ultimate goal is to help our students and lessen their pressure so that the school is a place where they can feel safe,” he said.

Nathan had said her decision to challenge the school policy was inspired by the top court’s ruling in 2020, which stated that having different hair rules for male and female prison inmates amounted to sex discrimination. The judicial review was initiated by former opposition lawmaker “Long Hair” Leung Kwok-hung, who took on prison authorities for shearing his shoulder-length locks when he was imprisoned in 2014.

When asked what he thought of the school’s chances of winning a legal challenge if there was any, Lee said each school had its own rules and that he hoped to resolve this matter through mediation.

“I believe that each school would take their vision and ethos into account when they draft their rules,” he said. “We need to help our students develop good habits. They need to have a simple, plain and healthy personal image to equip themselves for their future.”