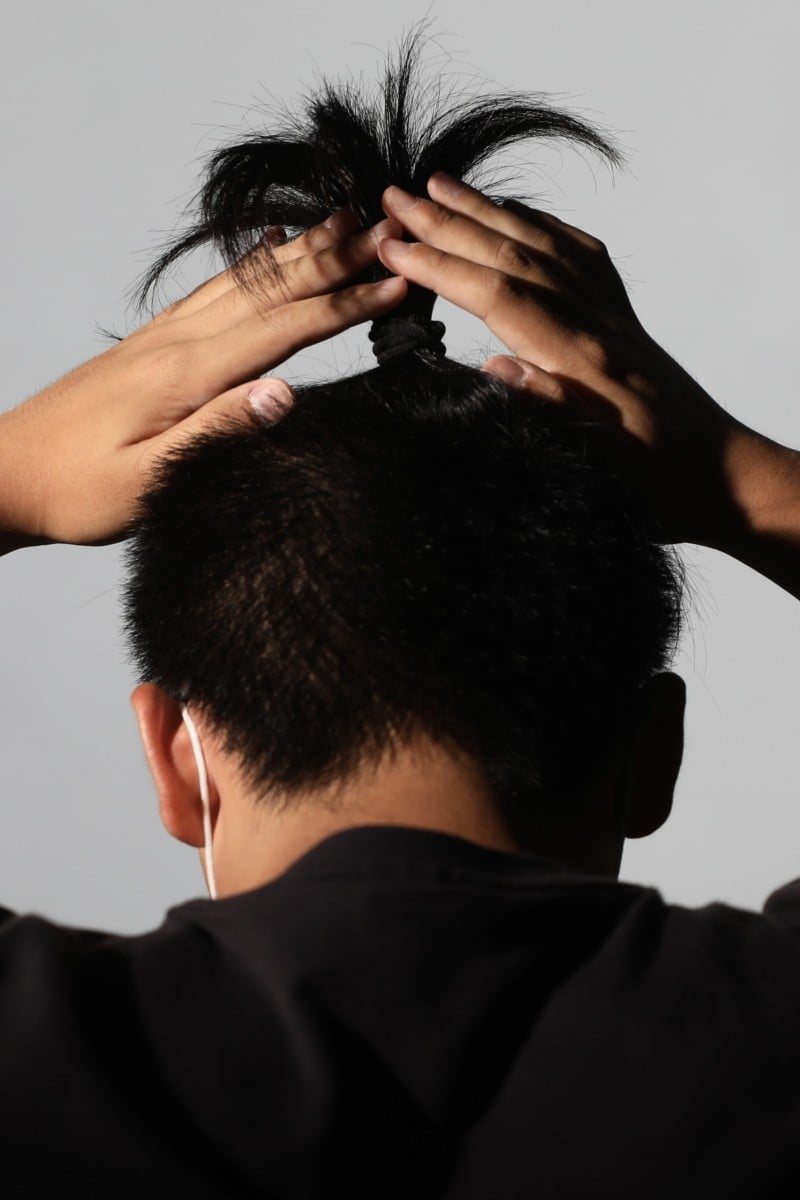 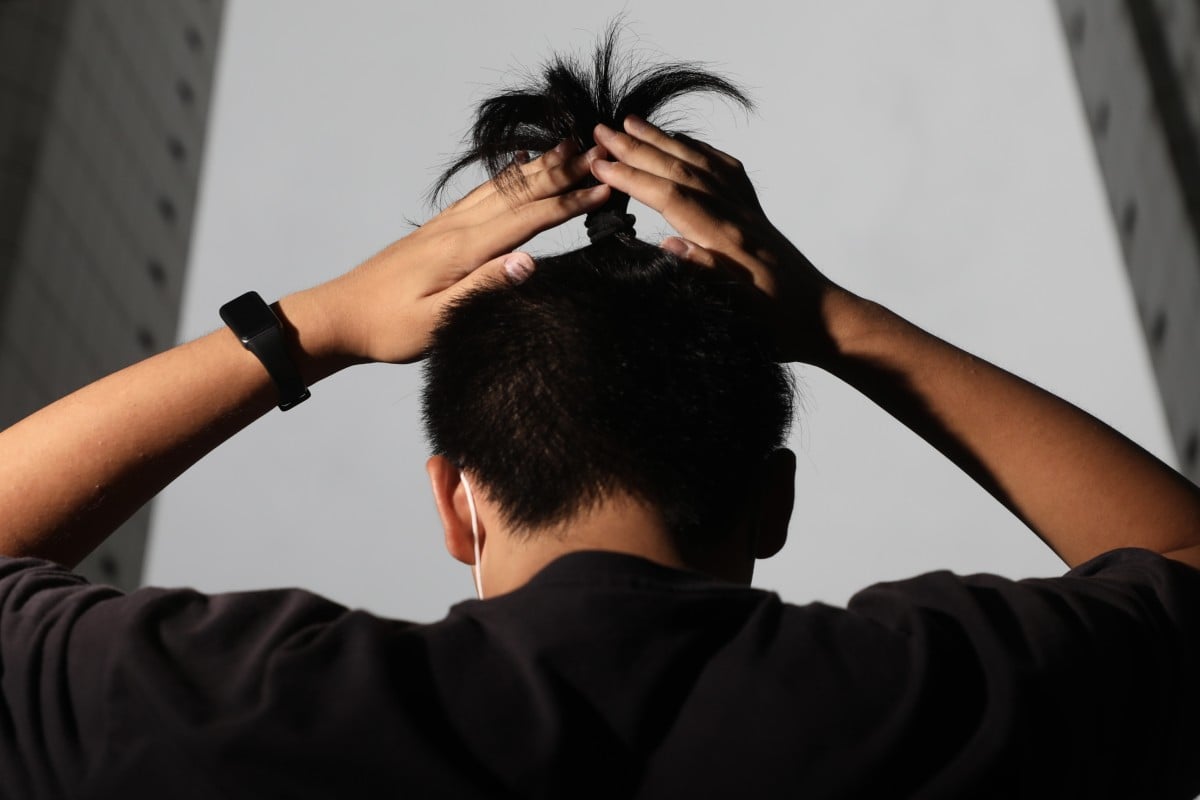 Oscar Wong shows his ponytail in front of the High Court in Admiralty. Photo: Xiaomei Chen

Hot Topics takes an issue being discussed in the news and allows you to analyse different viewpoints on the subject. Our questions encourage you to examine the topic in-depth – they can be used on your own or with a friend. Scroll to the bottom of the page for sample answers.

When the 17-year-old refused to obey his school’s hair rule, he was restricted to the sick bay at the school office. He attended most classes virtually using a tablet computer. “I felt distressed. The only chance I had to see my schoolmates was when I went to the toilet,” he said.

Although he was allowed back to class while keeping his ponytail in July last year, Oscar, who has autism, said the punishment further weakened his social abilities.

The student asked his father to apply for legal aid on his behalf to initiate a civil lawsuit against the school, but their application failed. The High Court dismissed their appeal at a closed-door hearing.

He is one of two Hong Kong students who are known to have complained to the Equal Opportunities Commission (EOC), saying their schools’ hair rules for boys amounted to sex discrimination. The other is Nathan Lam Chak-chun, 17, who studies at Tung Wah Group of Hospitals Wong Fut Nam College. Both schools, like many others in Hong Kong, insist that boys’ hair should not fall below the eyebrows or the top of their shirt collars.

Among those supporting the students’ action against the hair rule for boys was Liam Mak Wai-hon, 21, president of Quarks, a support group for transgender youth. Mak, who is a trans man, said the punishment given to Oscar reflected the conservative and transphobic culture of some Hong Kong schools.

Out of about 20 youths who sought Quark’s help over their schools’ appearance codes, Mak said, only one succeeded in persuading their school to let them come in sportswear instead of a dress.

Face off: Should schools have authority over students’ hairstyles?

A teenager in Hong Kong who says she experiences gender dysphoria lodged a complaint to the city’s equality watchdog in July challenging a school policy against long hair for male students. This has sparked heated discussions on whether educators have overlooked cases of mental distress in this community.

In an Instagram video that went viral after attracting nearly 380,000 views within a day of its release, Nathan Lam Chak-chun recalled being forced to get a haircut to avoid suspension from school, adding that the EOC was pursuing the complaint. Lam’s Instagram bio has “she/her” to indicate the pronouns she uses.

“The ban is not only discriminatory but also ignored reasons some male students hope to wear long hair. Gender dysphoria has been overlooked by schools and society in Hong Kong,” said the 17-year-old.

Nathan Lam recalled being forced to get a haircut to avoid suspension from school. Photo: Captured from Facebook

The Form Five student argued in the video that the school’s “unreasonable and outdated” dress-code policy violated the Sex Discrimination Ordinance.

She also argued that the usual grounds for schools to uphold similar bans were not substantiated. The student noted that boys with long hair would not damage the reputation of any institution and students’ tidiness did not depend on the length of their locks.

According to a local media outlet, the school involved had said the purpose of its dress-code policies was to help develop good living habits and a healthy image, and to prepare pupils for entering the workforce.

Separately, Secretary for Education Christine Choi Yuk-lin in July said she believed the school could handle the matter professionally. Without commenting on Lam’s case, she said: “Relevant rules were established according to schools’ own culture and value for education.”

Nathan Lam Chak-chun has not ruled out taking legal action against her school’s long hair ban for male students, after finding the first conciliation session arranged by the city’s equality watchdog “unsatisfactory”.

Nathan, who attended a two-hour mediation meeting with the principal of Tung Wah Group of Hospitals Wong Fut Nam College earlier this month, said she did not feel the session arranged by the EOC was helpful.

Before the meeting, Nathan told the Post that she expected the school to offer an exemption for her to keep her long hair, but she would not accept it as her goal was to have the rule abolished.

Nathan Lam’s mediation meeting with the principal of her school was arranged by the Equal Opportunities Commission. Photo: Jonathan Wong

Principal Lee Ching-pong said both sides had “pleasant” and “effective” communication in the meeting. He revealed that the school offered discretion to Nathan and would continue to provide her with professional emotional and psychological support.

“We will offer discretion based on professional advice. Our ultimate goal is to help our students and lessen their pressure so that the school is a place where they can feel safe,” he said.

Separately, Diana Kwok Kan, a sex therapist and a scholar specialising in gender studies at the Education University of Hong Kong, said children might experience discomfort caused by a discrepancy between their gender identity and biological sex as early as four years old.

“Mistreatment of adolescents with gender dysphoria diagnosis could induce self-harming or suicidal behaviour, which is often overlooked by educators in Hong Kong,” she said, adding that school social workers were important in understanding students’ distress and recognising that gender identity should not be confined to binary terms.

a set of rules that outline the appropriate attire and personal grooming standards required at a particular place or institution. This can include details such as what clothes and hairstyles are allowed.

Hong Kong’s statutory body responsible for implementing anti-discrimination ordinances. Established in 1996, the EOC works towards eliminating discrimination on the grounds of sex, marital status, pregnancy, disability, family status and race. Its work includes investigation and conciliation, education and promotion, review of legislation and issuing codes of practice and guidelines.

the idea that there are only two genders, male or female. “Non-binary” describes genders that do not fit neatly into one of these two categories.

psychological distress when someone’s gender identity does not agree with the sex assigned at birth. According to a 2021 survey conducted by the Family Planning Association of Hong Kong on 8,343 students, 4 per cent of females and 2 per cent of males said the sex they were assigned at birth did not reflect their gender experience.

one’s internal sense of self and gender, whether that is man, woman, neither or both. For transgender people, their gender identity differs in varying degrees from their sex assigned at birth. It is different to gender expression, which is how people present gender outwardly, through behaviour, clothing or hairstyle, etc. Society defines these cues as masculine or feminine.

code of practice issued by the EOC to promote equal employment opportunities between men and women. It provides guidance on procedures and systems that can help to prevent discrimination.