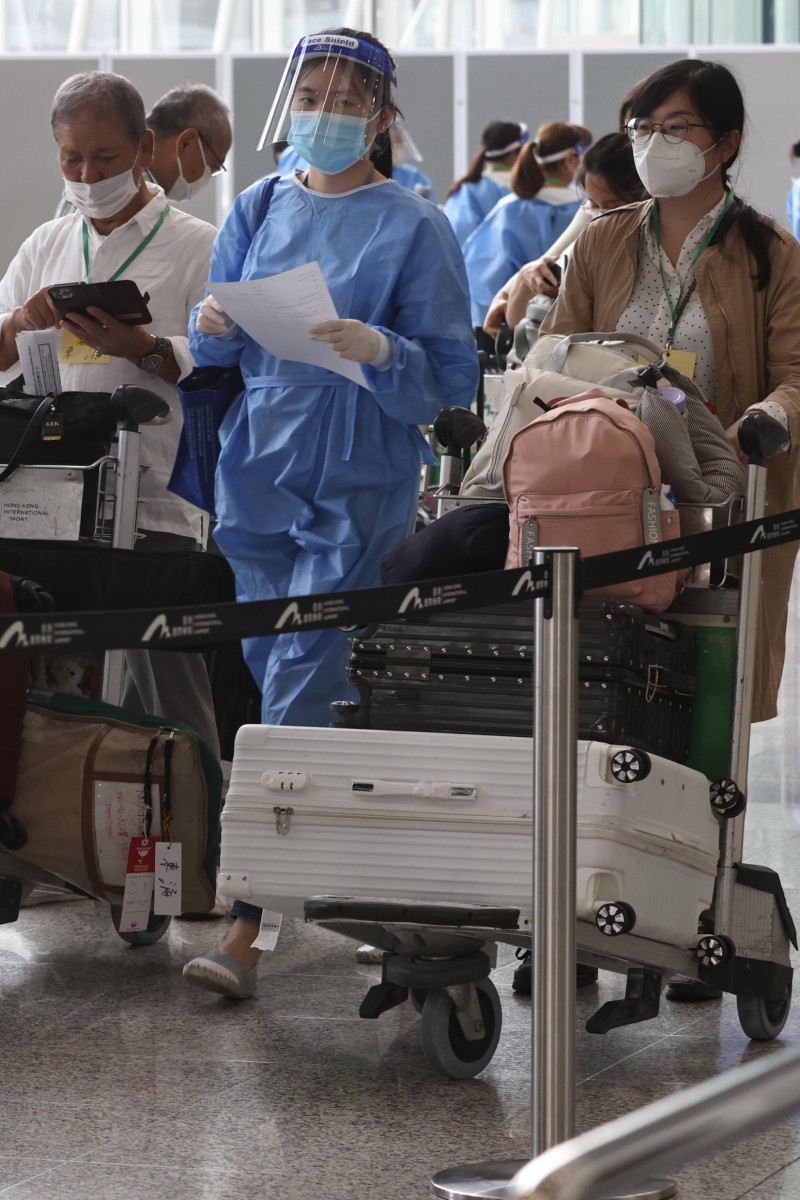 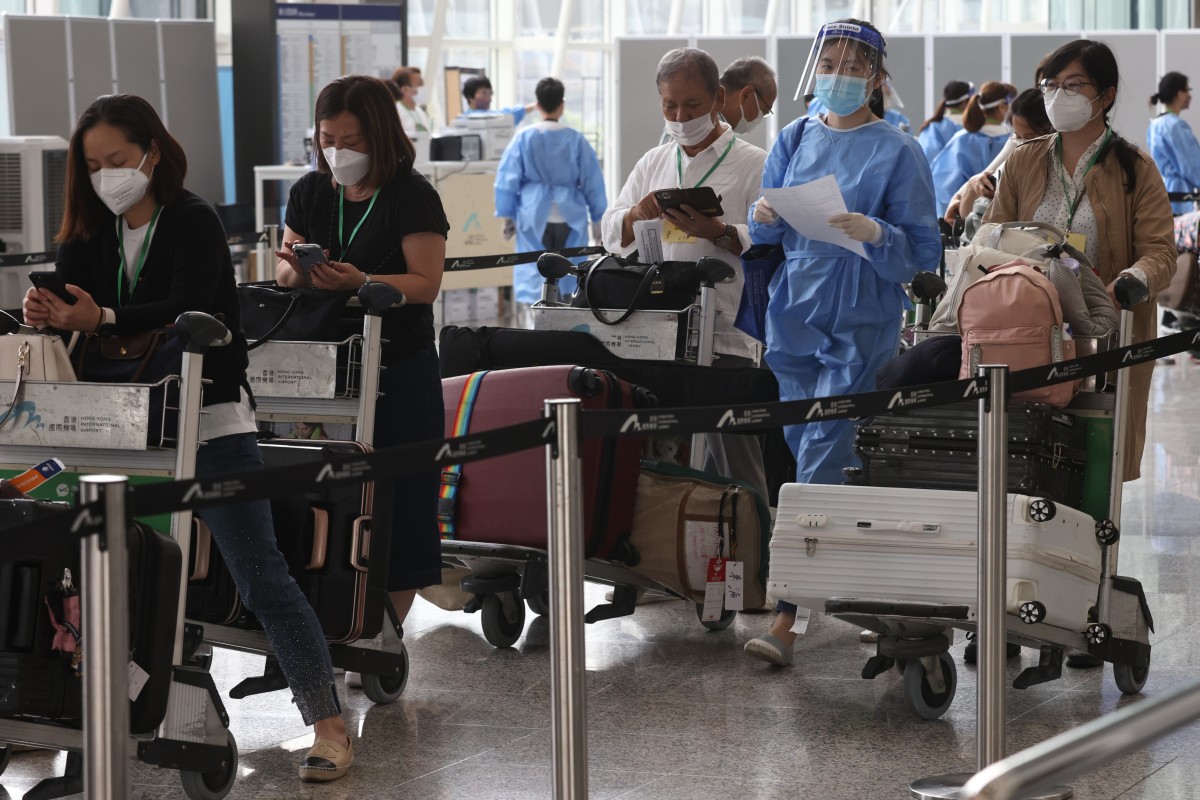 People who arrive in Hong Kong from abroad will no longer have to quarantine in hotels, beginning Monday. Photo: KY Cheng

Hong Kong will end its mandatory hotel quarantine for arrivals from Monday, requiring people flying in to only monitor themselves for potential Covid-19 infections for three days.

However, officials on Friday fell short of providing a road map for Hong Kong to remove all travel restrictions.

The long-awaited lifting of quarantine signals an end to one of the world’s toughest anti-pandemic regimes after more than 2½ years of attempting to keep the coronavirus at bay.

“This is the road into the future of the Hong Kong government: single direction, progressing in [an orderly fashion], and then, also we take a positive outlook into the future,” Chief Executive John Lee Ka-chiu told a press briefing.

“Our considerations are based on data analysis of the pandemic. We have also considered factors including people’s livelihoods, economic activities, Hong Kong’s competitiveness and ease of entry.”

He added: “Under the circumstances that we can put the pandemic under control, we will give Hong Kong the greatest space to connect with the world, give society the greatest economic impetus, reduce inconvenience for those who come to Hong Kong and not retrace our steps.”

Travellers will not have to use designated quarantine hotels. Photo: Dickson Lee

From September 26, travellers will only need to undergo three days of self-monitoring at their choice of premises, including their homes or any hotel they book for their stay.

For the three days, they will be given an amber health code upon arrival, which bars them from entering most premises, including restaurants and bars, where visitors have to declare their vaccination status.

They would be able to use public transport, Lee said.

Travellers will only need to provide a negative rapid antigen test and declare their results through a digital form 24 hours before boarding their flight. That replaces the requirement to have a negative PCR test before being allowed to board.

Unvaccinated Hong Kong residents will be allowed to return to the city. However, they can only obtain a vaccine pass if they are fully inoculated.

The administration will also lift the quota for the “Return2hk” scheme, under which a certain number of local residents can return from mainland China and Macau without quarantining. Quotas for the “Come2hk” for travellers from both places will also be lifted.

“We will monitor the situation closely so that all the risks can be well-controlled and things can progress in an orderly manner,” Lee said.

“If there is a positive development as we progress … there will be more room to do extra measures so that we can have more movement, more activities and more room to go about different manoeuvres.”

Japan to lift Covid restrictions on foreign tourists from October 11

Asked if the city had shifted from a “dynamic zero-Covid” strategy to coexisting with the virus, the chief executive said Hong Kong’s policy was in line with the nation’s.

“We still need to protect the young and elderly. We also deliver precise anti-epidemic measures and connect with the world,” Lee said. “We made the decisions after thorough discussion.”

Health minister Lo Chung-mau said the government’s principles included not to lie flat, and protecting the elderly and children. He noted that the daily Covid-19 caseload had increased since May and reached a peak in early September.

Lo added that during this time, the government had brought in various measures, such as requiring people to undergo rapid antigen tests before attending banquets, and launching yellow and red health codes.

Travellers arriving in Hong Kong previously had to quarantine for as long as three weeks. Photo: Yik Yeung-man

About 70 per cent of the eligible population had had a booster, which was also a relatively high proportion globally, he said, but warned that the vaccination rate was not yet ideal, especially for those aged under 11 and above 80.

Following the government’s announcement, Hong Kong’s flagship carrier Cathay Pacific experienced high traffic on its website. Waiting times had extended from four to at least 15 minutes as of 5.30pm, with each user being given 30 minutes to book their tickets.

Health experts had earlier suggested that it was impossible for the city to return to zero infections a day, and recommended a policy change if daily caseloads – which had dropped from a high of more than 10,000 earlier this month to over 5,000 this week – stabilised, urging authorities to open up before a possible winter surge.

Officials have also faced mounting pressure from the business sector, which has joined the chorus of calls for the city to open up, citing rival hubs such as Singapore and other countries worldwide that have resumed quarantine-free travel.

In recent weeks, some major sports events have been cancelled or moved elsewhere in light of the strict pandemic measures, with organisers accusing the government of failing to make timely decisions to allow for proper preparations.

The current “3+4” arrangement for incoming travellers was eased from a week-long hotel isolation requirement on August 12. Arrivals have to quarantine in a designated hotel for three days and spend another four under home medical surveillance, with their movement citywide limited.

Those found to be infected with Covid-19 upon landing in Hong Kong are given a red health code, while a yellow version is issued to people under home medical surveillance, barring them from most premises, including restaurants and bars.