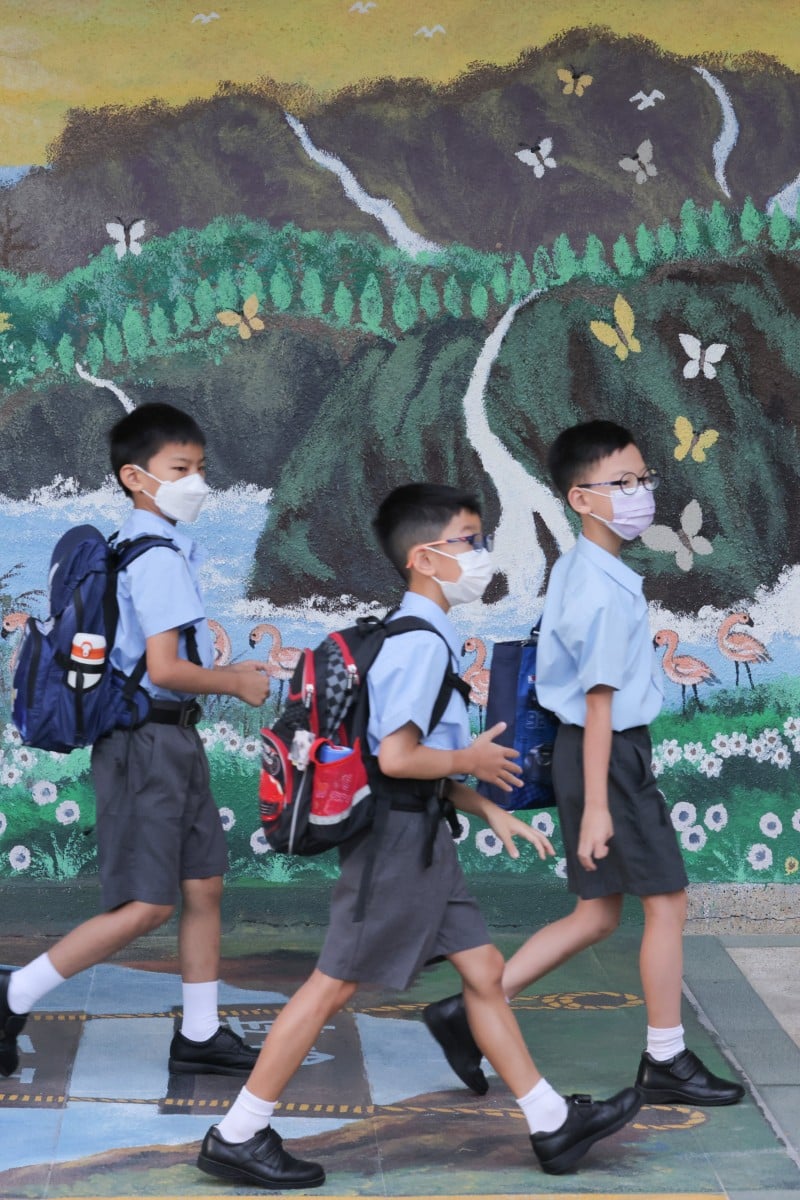 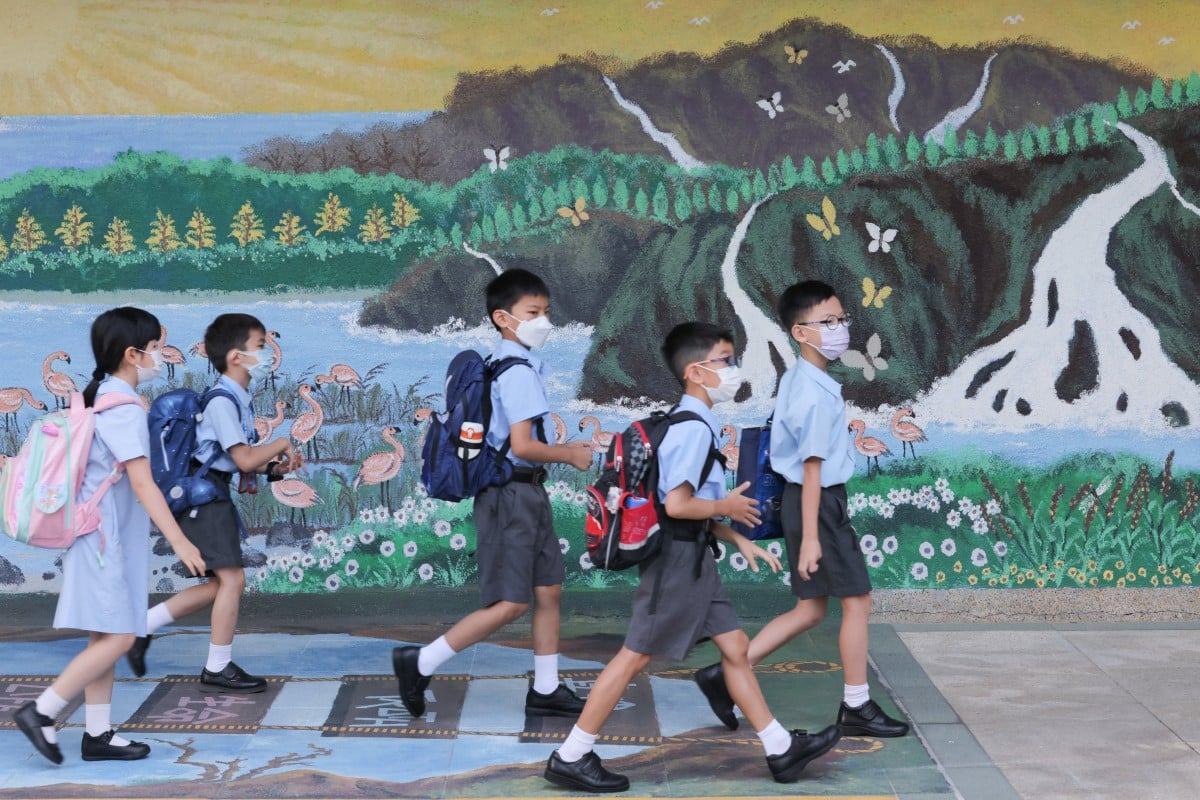 Children, as well as their parents and teachers, are having to pick up the pieces after the pandemic disrupted the city’s education system. Photo: Jelly Tse

Hong Kong housewife Janice Lau is worried that the Covid-19 pandemic not only disrupted her children’s school life, but also affected their development as they lost out on interacting with classmates and playing with friends.

Her daughter Sophie, 10, who is in Primary Five, and son Matthew, six, in Primary One, attended only half-day classes or online lessons after the pandemic broke out in early 2020.

“Sophie’s Primary Two to Four went missing,” she said. “For many months, she attended virtual classes, which meant staring at a screen with 30 tiny boxes, each representing a classmate.”

Matthew, who has autism and developmental delays, is struggling to cope in the school setting.

“It has been quite difficult for him, and he’s had a lot of negative emotions to express when he came back from school every day,” Lau said.

For more than 800,000 children in Hong Kong, the pandemic meant spending a total of 10 months attending virtual lessons at home instead of being in school with classmates and teachers.

Experts are beginning to gauge the emotional and developmental impact on different groups, from preschoolers to primary-level children, and teenagers in secondary school.

Disruptions to children’s learning have hampered both their social skills and mental well-being, experts have warned. Photo: Robert Ng

Most agree that the disruption has taken a toll on Hong Kong’s children, and some need closer attention and help to cope even as the city eases its coronavirus restrictions.

Social workers noted that many of those whose kindergarten years were disrupted struggled to write and communicate confidently, or had trouble separating from their mothers to go to school.

They said primary school pupils found it harder to make friends in school, while some teenagers had anxiety and other emotional issues.

Since 2020, the Education Bureau suspended face-to-face teaching three times as the city battled wave after wave of Covid-19 infections.

The suspensions lasted from late January to late May 2020, mid-November 2020 to mid-February 2021, and from mid-January to mid-April this year.

Instead of going to school for a total of 27 months, children spent only 17 months in school attending mostly half-day classes, staying home for the remaining 10 months, having virtual classes.

Although there were periods of face-to-face classes, Lau said her daughter Sophie had to adjust as her classmates changed.

“Some pupils moved to another class or school, and some emigrated. So Sophie could not really remember who her classmates were in Primary Three and Four,” she said.

Her school friends were mainly those who went to the same after-school tutorial classes.

“Now there are half-day classes, but the recess is short and pupils must stay in their seats except when they go to the toilet. It’s completely different from the old days when children could run around and really have a school life,” said Lau, whose youngest child, a toddler, is not yet in school.

Experts have highlighted the impact of the pandemic disruptions on children in different age groups.

Catherine Au Ka-lee, an education psychologist at The Boys’ and Girls’ Clubs Association of Hong Kong, an NGO, said virtual learning was not a good idea for toddlers and preschoolers, as they had a short span of concentration.

“Kindergartens are places for young children to develop school readiness, and learn through their five senses, whereas virtual classes only allowed them to look and listen,” she said. “During the pandemic, toddlers also lacked the experience of going outdoors, or learning social skills through winning or losing games.”

“The kindergarten children are very attached to their mothers or carers, and unwilling to be separated from them,” she said. “They are also not as strong in expressing themselves verbally, as they missed out on the learning environment of a school setting.”

Instead of human interaction, children have been spending more time on electronic gadgets.

A University of Hong Kong (HKU) study released last month found that the average time primary school pupils spent on electronic gadgets surged from two hours before the pandemic to seven hours, while for secondary students it was nine hours, an hour more than before.

Sociologist Stefan Kuhner, who has been studying the impact of Covid-19 on children aged 10 to 12, was concerned that many described their lives as being “stressful” since 2020.

“Middle childhood is when children start to spend more time away from their family and more time in school, with friends,” said Kuhner, who is associate dean of Lingnan University’s social sciences faculty.

“Being forced to spend more time in lockdown … risks interfering with the normal development, not only of children’s academic ability, but also their identity.”

Clinical psychologist Rachel Poon Mak Sui-man warned that primary pupils could also have suffered from the lack of physical activity and social interactions in school.

“Many of us are still in touch with our primary schoolmates because they were our playmates; we played together during recess and lunch time every day, but these activities are not allowed now,” she said.

She was also concerned about children with special education needs who could not have face-to-face meetings with their therapists.

“If they have attention deficit or hyperactivity disorder, they are unlikely to pay attention in online sessions,” she said.

The Boys’ and Girls’ Clubs Association of Hong Kong interviewed 525 parents from May to July to gauge how families with children with special needs coped during the pandemic.

More than 70 per cent of those with children in primary school said their learning had suffered, and 57 per cent said their youngsters’ emotional issues worsened.

Should a fourth Covid shot be mandatory?

Almost a quarter of the parents with special needs children in kindergarten and two-fifths of those with youngsters in primary school also showed medium or serious signs of depression, the survey found.

Veteran social worker Lam Yee-mui, a senior consultant with the association, said that these findings highlighted the need for NGOs, parents and schools to do more to help children with special needs.

The pandemic also widened the gap between children from different socio-economic backgrounds.

“Some children might be able to communicate better in English because they spent lots of time with their foreign domestic helpers … but others lived with siblings in subdivided flats,” he said.

“This has resulted in a greater diversity in pupils’ capabilities and it’s more challenging for teachers to cater to the needs of all children and work with parents to help them.”

Pandemic leaves many Hongkongers with symptoms of post-traumatic stress disorder

Poon, the clinical psychologist, said she was concerned about teenagers, who missed being with friends during a critical period of growing up.

“Peer influence is an important feature of adolescence. But many teenagers had to stay home during the pandemic, and all their actions were put under their parents’ magnifying glass,” she said.

She had come across many teens who found life during the pandemic to be “defeating” and had become reclusive.

“Without the routine of going to school every day, some became socially unmotivated and felt nervous or worried about taking part in social activities,” she said.

5 tips for patients with long Covid

Psychologist Au said that to help young people with emotional problems, teachers and parents had to watch out for any unusual change in behaviour.

“We also need to counsel them, so they know how to guard themselves against negative thoughts,” she said.

* If you are having suicidal thoughts, or know someone who is, help is available. Dial 2896 0000 for The Samaritans or 2382 0000 for Suicide Prevention Services.

In the US, call The National Suicide Prevention Lifeline on +1 800 273 8255. For a list of other nations’ helplines, see this page