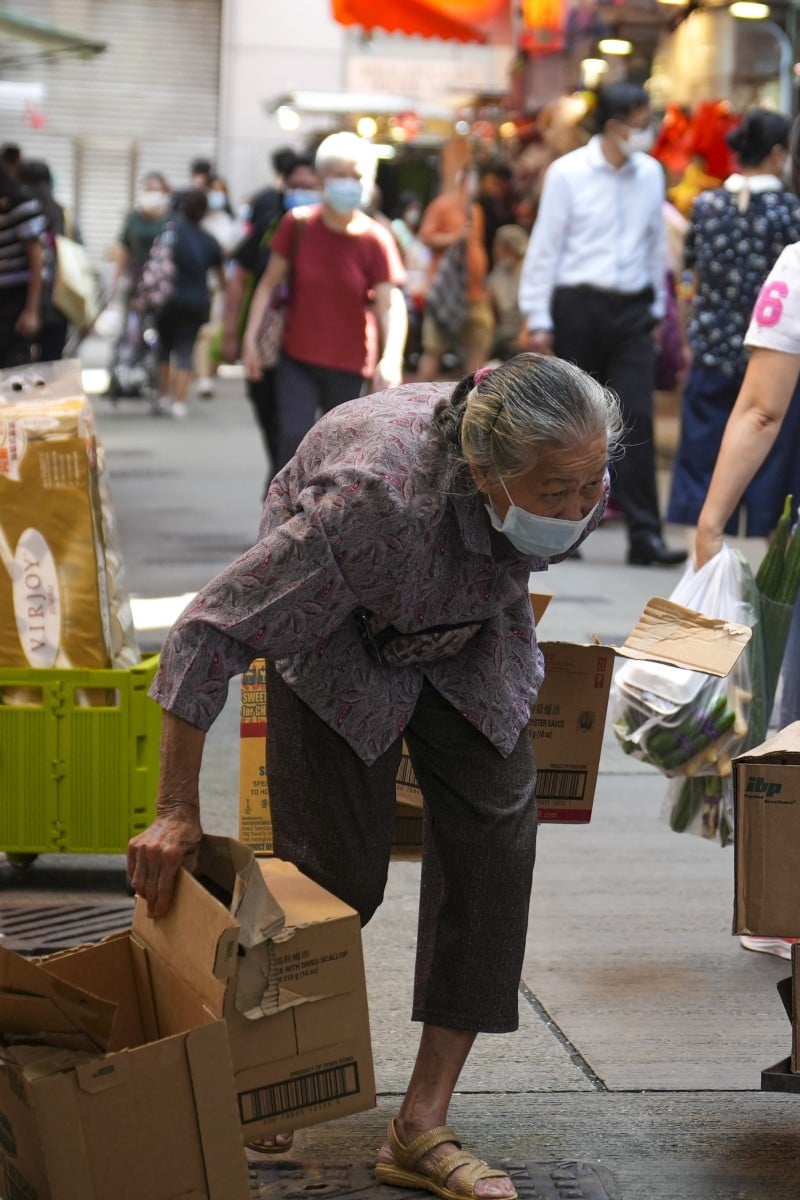 Elderly people and women in poverty have been forced out of work during the Covid-19 crisis, an Oxfam reports says. Photo: Sam Tsang

The gulf between rich and poor in Hong Kong has widened during the coronavirus pandemic. An anti-poverty NGO has said the top bracket of households earns about 47 times more than those at the bottom.

Experts say the coronavirus pandemic hit poor people harder than it did the well-off. Photo: AFP

“The problem of unemployment and underemployment among the poor remains severe,” Kalina Tsang Ka-wai, the director general of Oxfam Hong Kong, said.

Tsang said the pandemic was tougher for poor people than for the well-off. This led to those in poverty being more likely to lose their jobs and income.

Terry Leung Ming-fung is the group’s assistant research and advocacy manager. He said the pandemic also forced low-income elderly people and women, who were economically active, to lose their jobs.

The charity added that a severe shortage of childcare facilities made it difficult for poor women to find jobs as they had to care for their children. The report found almost 80 per cent of them could not work.

Dr Xu Duoduo is an assistant professor of sociology at the University of Hong Kong. She said most lower-paid workers were in jobs hit the hardest by the pandemic, such as the catering and service industries. But she said jobs held by the top earners, such as those in finance, remained relatively stable. Xu added the better-off often had stocks and properties to contribute extra income.

Wong Shek-hung is the director of the Hong Kong, Macau and Taiwan programme of Oxfam Hong Kong. She said the city’s minimum wage had stayed at HK$37.50 an hour since 2019. Thus, low-wage workers struggled to pay for what they needed as the consumer price index, especially food prices, continued to rise.

Oxfam Hong Kong has made several suggestions to the government designed to help narrow the gap between rich and poor and ease the plight of the worst-off.

The NGO recommended extending the government’s temporary unemployment relief scheme to the end of the year, which could benefit another 120,000 people. The group called for the minimum wage to be increased to HK$45.40 per hour, which could benefit nearly 340,000 workers. It added that the level should be reviewed on an annual basis instead of every two years.

Oxfam Hong Kong also said the government should regularise and increase the number of beneficiaries of its pilot scheme on living allowance for carers of elderly people from low-income families. It said that authorities should remove the regulation that carers cannot receive Old Age Living Allowance or support from the Comprehensive Social Security Assistance programme.

Oxfam Hong Kong’s report has found the jobless poor faced long periods of unemployment, with about 60 per cent of them remaining jobless for at least two months. Photo: Nora Tam

The charity also suggested the government set up independent childcare facilities to help women from low-income households go out to work instead of having to look after their children.

“Poverty is one of the major issues that the new administration must address,” said Kalina Tsang Ka-wai, the director general of Oxfam Hong Kong. “We hope to see policies that actively assist the poor and build a stronger post-pandemic recovery in the administration’s first policy address.”

Dr Xu Duoduo, an assistant professor of sociology at the University of Hong Kong, urged the government to create a social safety network by establishing an unemployment insurance scheme and a universal retirement protection system to provide long-term assistance for the poor. But Xu predicted the income gap would narrow over time as the city continued to reduce its Covid-19 restrictions.

“The figure has plateaued, and it will drop as the pandemic measures continue to be relaxed and the economy rebounds,” she said.

Experts have pointed out that Hongkongers who are born poor face difficulties on all fronts, with many potentially caught in an unending loop of intergenerational poverty.

According to the Hong Kong Poverty Situation Report 2020 released last November, 1.65 million people – almost one in four of the population – lived below the poverty line, set at half the median monthly household income.

A survey of 201 poor children and teenagers by local NGO Society for Community Organisation (SoCO) found that more than four in five respondents had to do housework or look after family members, which they said affected their health and studying.

intergenerational poverty is a cycle in which poverty persists from one generation to the next. Illustration: Brian Wang

Nelson Chow Wing-sun, an emeritus professor of the department of social work and social administration at the University of Hong Kong said poor children often struggled more with language skills, especially English, because of their parents’ low education levels. This affected their chances of entering top schools and universities.

“Unlike their well-off peers who were more confident about their chances of going to university and becoming professionals like doctors and lawyers, children of low-income families did not have strong aspirations,” he said.

a special monthly allowance of HK$3,915 given to Hong Kong people aged 65 or above who need financial support. This excludes elderly people with assets such as bank savings, investments and properties amounting to more than HK$374,000 for those who are single, and HK$568,000 for married couples.

analysed government statistics from 2019 to the first quarter of this year. The charity found that people aged 40 or older made up more than three-fifths of the poor population who were without employment. The jobless poor also faced long periods of unemployment, with about 60 per cent of them remaining jobless for at least two months, and a quarter having no job for more than half a year.

refers to those who can only find employment for shorter than normal periods, such as part-time workers, seasonal workers and casual workers. Nearly four in five of those living in poverty in Hong Kong worked fewer than 20 hours a week, compared with about three in five in 2020. Unemployment, on the other hand, refers to those who are actively seeking jobs but cannot find work.

state-provided insurance that pays money to individuals weekly when they lose their job and meet certain eligibility requirements. This is typically not applicable to those who either voluntarily quit or were fired for a just cause.