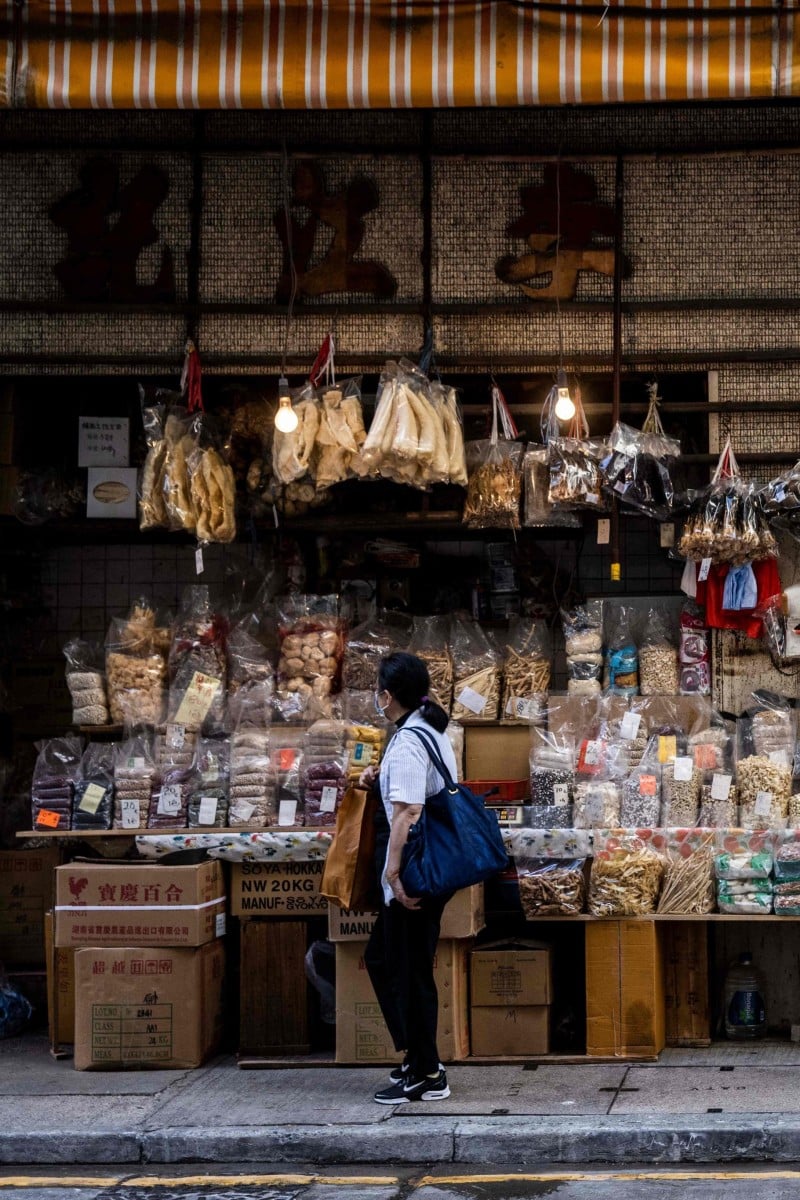 People browse a shop that sells shark fin, dried seafood and other products in Hong Kong. The city’s controversial shark fin trade may face its biggest shakeup in years if conservationists get their way in securing tighter regulations at an international wildlife conference in Panama. Photo: AFP

Hong Kong’s controversial shark fin trade may face its biggest shake-up in years if conservationists get their way in securing tighter regulations at an international wildlife conference in Panama.

The city is one of the world’s largest markets for shark fin, which is viewed by many Chinese communities as a delicacy and often served as a soup at expensive banquets.

While domestic consumption has shrunk after years of activist campaigning, Hong Kong remains a vital trade hub for shark fins – both legal and illegal – headed for the Chinese mainland and Southeast Asia.

The city regulates its shark fin trade using an international treaty on endangered species, meaning certain types of fins must have export permits showing they were sustainably captured.

The latest meeting of the 184-nation Convention on International Trade in Endangered Species of Wild Fauna and Flora (CITES), which began in Panama on Monday, may add protections for two major shark families.

In this 2013 photo, workers lay out pieces of shark fin to dry on a rooftop of a factory building in Hong Kong. Photo: Reuters

Researchers say the proposals, if passed, will protect a huge number of shark species and place further pressure on Hong Kong’s law enforcement, which is already battling a surge in illicit shark fins.

Hong Kong seized 27.5 tonnes of legally regulated shark fins in 2021 and 29.5 tonnes the year before, a government spokesman told Agence France-Presse. In 2019, the figure was just 6.5 tonnes.

Marine biologists estimate that upwards of 100 million sharks are killed each year, pushing vital apex predators towards extinction and ocean ecosystems to the brink of collapse.

The fins are usually sliced from their bodies and the animals thrown back into the sea where they suffer a slow death.

There are signs Hong Kong consumers have become more aware.

A survey in 2009 found that 73 per cent of respondents had eaten shark fin in the preceding year, but a decade later that number fell to 33 per cent.

The government, major caterers and image-conscious brands have also been keen to bolster their environmentalist credentials by ditching shark fin from banquet menus.

Shark fins laid out on a tarp outside a shop in Hong Kong. Photo: AFP

“Fewer people want to buy shark fins nowadays, but we have our regulars, mostly the elderly,” said one shopkeeper who declined to be named, adding that her customers spend an average of HK$2,500 per catty (a measurement equal to 605 grams).

A nearby restaurant was offering a range of shark fin soups that maxed out at HK$980 per bowl.

It is hard to tell the level of compliance among import-export firms and retail vendors, according to Stan Shea, marine programme director for the BLOOM Association Hong Kong.

“As an ordinary citizen, the only thing you can do is ask the shopkeeper, ‘Are your fins legal?’” he told AFP. “(Sellers) are not required to label their goods and very few do.”

Battle to save endangered Panama turtle at centre of aphrodisiac superstition

Once a piece of shark fin is skinned and processed, the only reliable way to check if it belonged to an endangered species is DNA analysis – which Shea and other researchers conducted in 2014.

More than 10 per cent came from sharks regulated by CITES at the time.

A more recent 2020-2021 study by Shark Guardian in Taiwan found half of shark fin traders were selling protected species.

Blue sharks – which industry representatives argue have stable populations – are the most commonly found among fin traders.

Blue sharks are the most commonly found species among fin traders. Photo: Shutterstock

But that could change if a CITES proposal backed by more than 40 countries to regulate all species of requiem sharks is successful.

“If the proposal is passed, and assuming the market composition hasn’t changed since 2014, then 90 per cent of shark fins on the market will need to have export permits,” Shea said.

Over the past five years, Hong Kong has prosecuted five people for importing endangered shark fin without a licence – an offence punishable by up to 10 years in jail and a HK$10 million fine.

The government last year expanded the law on organised crime to cover wildlife smuggling, but no such prosecutions have taken place.

“If this Panama conference adds more species to (CITES regulations), the government should pay close attention,” he told AFP.

“Wildlife smuggling has become very systematic and organised, so investigations need to be dialled up.”