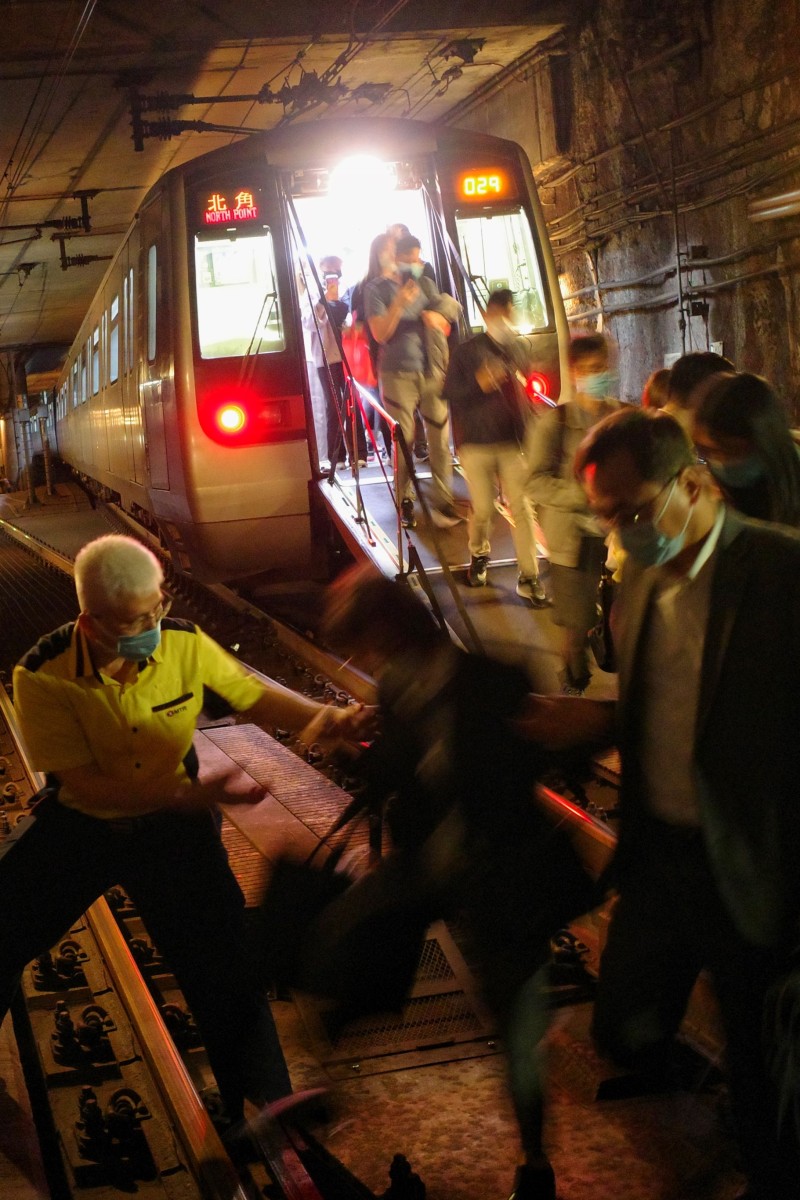 About 1,500 passengers were forced to evacuate through an MTR railway tunnel on Monday morning after a train suffered mechanical failure, which caused the rail operator to promise a comprehensive review of its resource management and maintenance regime.

The North Point-bound train ground to a halt in the tunnel as it approached Tseung Kwan O station after couplings between two carriages failed, which forced a service suspension on part of the Tseung Kwan O line until the train was removed from the tracks about four hours later.

Two passengers felt unwell during the incident, and hundreds of others scrambled for alternative transport to finish their journey to work or school during the morning rush hour. Many complained about unclear instructions and long waits for buses.

MTR must take responsibility for its mishaps

The service disruption, the second major one in less than a month, triggered calls for the MTR Corporation to step up inspection of its system. One lawmaker proposed a review of the fare adjustment mechanism to link service performance to the right to charge passengers more.

The MTR Corp announced it would start a comprehensive review on Monday night, saying it was deeply concerned about the recent train incidents.

“The corporation has to conduct a review on its existing asset management and maintenance regime to ensure that the management of railway assets can be maintained at a high standard,” Chairman Rex Auyeung Pak-yuen said.

A source familiar with the incident said couplings that connected two compartments of the train travelling from Lohas Park station had twisted and failed to function properly at about 8.30am.

“The train suddenly emitted a very loud bump sound before it halted and the electricity went out,” the insider said. “We suspect the train hit something again.”

The MTR Corp stressed there was no derailment, but added it would carefully inspect relevant parts of trains of the same model. Police said the failure occurred between the train’s sixth and seventh compartments.

“I apologise for the inconvenience caused to passengers by the disruption of service this morning,” operations chief Sammy Wong Kwan-wai said.

“A mechanical failure took place when the train was about to enter Tseung Kwan O station, triggering the relevant safety equipment to stop the train as it was a certain distance away from the station.”

Secretary for Transport and Logistics Lam Sai-hung said he had ordered the MTR Corp to thoroughly investigate the cause of the incident.

The Electrical and Mechanical Services Department ordered the operator to submit a preliminary investigation report before Thursday and a detailed one before February 4 next year.

The report should include an account of the incident and its causes, what immediate action was taken, improvement measures and a plan to implement them, the department said.

SCMP photographer Sun Yeung said the train stopped suddenly and he saw people in the compartment fall to the floor.

“We were waiting inside the train for about 20 minutes before the MTR staff evacuated us from the front of the train,” he said.

The MTR Corp said station staff led about 1,500 passengers out of the train, along the tunnel to the platform at Tseung Kwan O station in a safe and orderly manner.

The Fire Services Department said it received a report at 9.18am and officers were later deployed to help in the evacuation of passengers. It said 104 firefighters and ambulance personnel were sent to the scene, as well as 30 appliances.

A police spokeswoman said two women in their thirties felt unwell and were taken to hospital just before 10am. The pair received treatment from paramedics at the station and were sent to Tseung Kwan O Hospital, according to police. One of them was pregnant, the force added.

Passengers were seen queuing up for shuttle buses outside Po Lam station, with some saying they had waited for more than 30 minutes. Many complained of poor arrangements and demanded the MTR Corp arrange more feeder buses.

Last month, a train hit a dislodged metal fence next to the track while pulling into Yau Ma Tei station, ripping off doors and derailing a carriage. Service was disrupted on part of the Tsuen Wan line for the rest of the day.