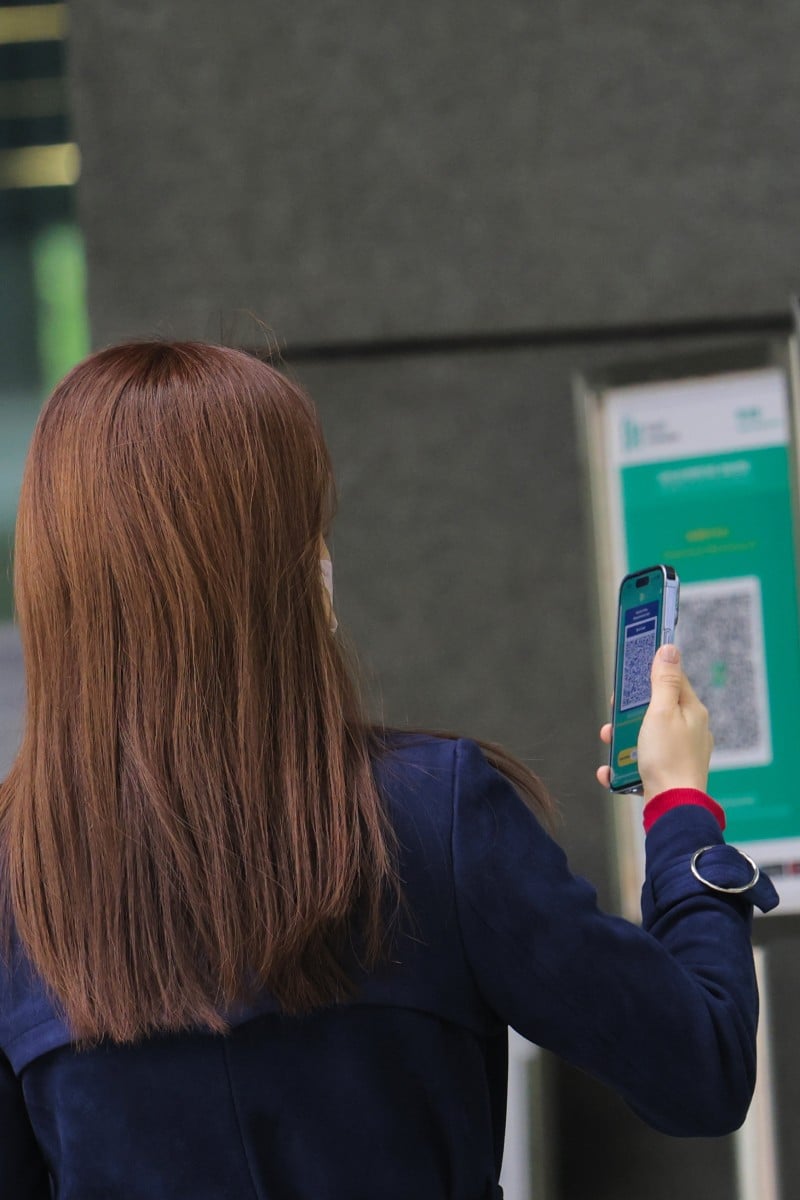 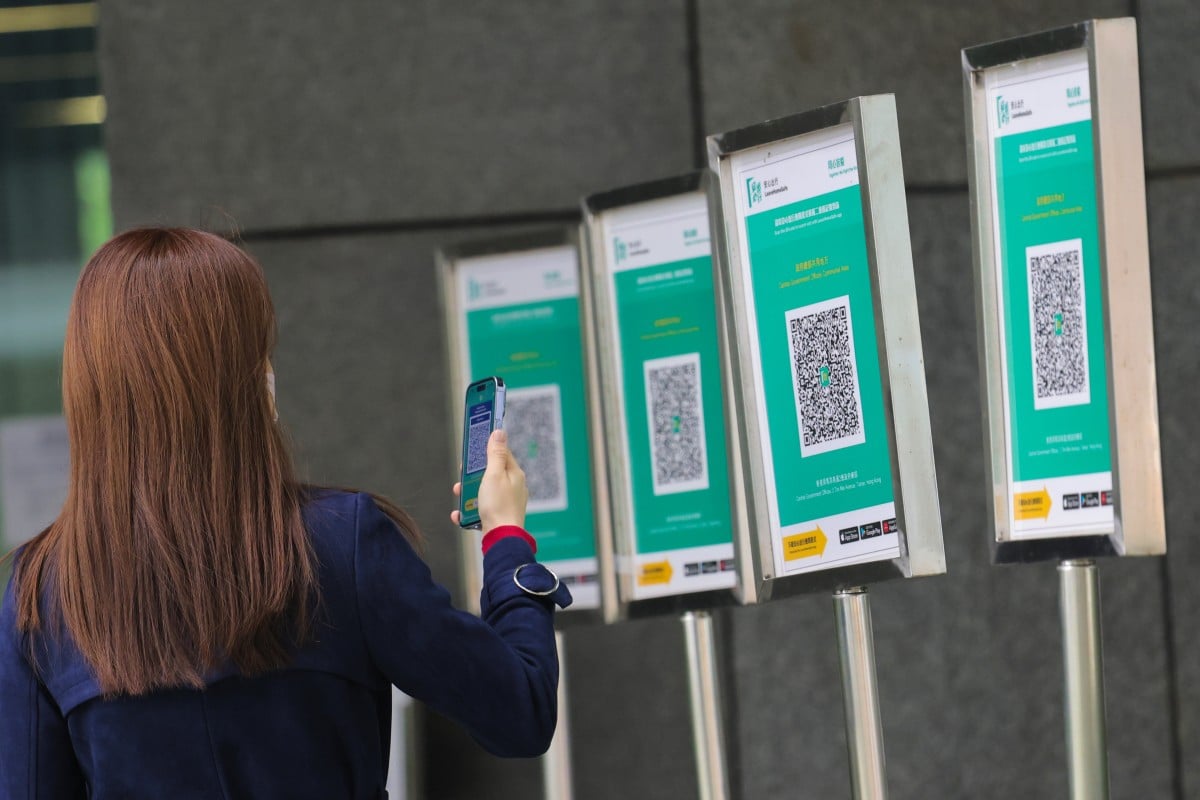 The Hong Kong government announced it would scrap the use of the “Leave Home Safe” app on Tuesday. Photo: Jelly Tse

Hong Kong is scrapping its amber health code beginning on Wednesday, effectively lifting all travel restrictions for arrivals into the city who test negative on arrival.

While residents would no longer be required to use the risk-exposure “Leave Home Safe” app, restaurant patrons and entrants to other designated venues would still need to show proof of having received three Covid-19 vaccines, officials on Tuesday said. Compulsory polymerase chain reaction (PCR) tests will also be scrapped in many occupations and at checkpoints for cross-border travellers.

“The decisions were based on data and risks,” Chief Executive John Lee Ka-chiu told the press before his weekly meeting with the Executive Council, his key decision-making body. “The infection risk from imported cases is lower than the risk from local infections. We believe that the lifting [of the measures] will not increase the risk of local outbreaks.”

Currently, travellers arriving in Hong Kong are put under a much-criticised “0+3” regime where they are issued an amber code on their health app even if they test negative and banned from entering restaurants, gyms and beauty parlours during their first three days.

But with the latest move, Hong Kong is effectively adopting the “0+0” regime, and all incoming travellers who test negative will be given a blue code on their health app and can move about the city freely.

Incoming travellers who test negative for Covid will be given a blue code on their health app and can move about the city freely. Photo: Sam Tsang

Health minister Lo Chung-mau said separately data gathered in the past month showed a 3.8 per cent infection rate among imported cases, meaning 38 out of 1,000 incoming travellers were found with the virus upon arrival. Only 1.6 per cent of them were found to be infected later – lower than the 2.5 per cent local infection rate.

Under the new rules, arrivals who test negative with a PCR kit can immediately go into the community, entering restaurants, bars, theme parks and museums. Those who test positive will still receive a red health code and have to follow the usual isolation protocols. Arrivals will also still need to take a PCR test at the airport and on their third day in the city, and a rapid antigen test (RAT) for five days.

Electronic wristbands for infected people will also be scrapped, as Lo said the red code could already effectively prevent the spread of the virus in the community.

Mandatory PCR tests will also be largely reduced in the community and for those crossing the border to mainland China. Travellers heading to the mainland and Macau no longer need to undergo pre-departure Covid tests at checkpoints from Wednesday. They only need to complete a PCR test 48 hours before departure.

Mandatory PCR tests will only be required for high-risk groups, including hospital staff and workers at care homes, while employees in other occupations can choose to do RAT tests voluntarily. Compulsory PCR testing notices issued to residential buildings will also be reduced.

With the dropping of the use of the risk-exposure “Leave Home Safe” app – introduced in November 2020 – people entering restaurants, bars and designated premises only need to show proof of their vaccination records, via other apps on their mobile phone or on paper.

While use of the “Leave Home Safe” app will no longer be required, patrons of bars and restaurants will still need to show their vaccine records. Photo: Dickson Lee

“We still require patrons to show their vaccination records as this will encourage residents to take jabs, especially among our elderly and children,” Lo said. “We can also protect those who are unvaccinated from entering high-risk premises.”

He also revealed latest data from waste water surveillance showed the current Covid-19 wave might have plateaued, and despite the large number of infections, the healthcare system was still functioning well, an improvement from previous waves and earlier in the year.

Health authorities recorded 14,717 cases on Monday, of which 5 per cent, or 704 cases, were imported.

Asked whether Hong Kong’s border with the mainland could also be reopened before Lunar New Year on January 22, Lee said his government had been working hard with central authorities on the matter.

“This is close to my heart, and I’ll do everything I can to facilitate it … Our goal is to allow normal cross-border travel as soon as possible, but we can only progress in accordance with the actual situation,” he said. “We all know the epidemic situation, the number of infected cases on the mainland.”

Mainland residents no longer need to present a green health code, previously issued to PCR-negative users, when entering public places, except hospitals, schools and care homes for the elderly.

From last Friday, residents and arrivals infected with Covid-19 have been allowed to leave isolation on the fifth day instead of the seventh, if they test negative for two days in a row. The shortened period also applies to unvaccinated close contacts, previously required to isolate or quarantine for seven days.

The catering sector earlier expressed disappointment over the lack of changes in social-distancing rules, pointing out their Christmas and new year business would be affected.