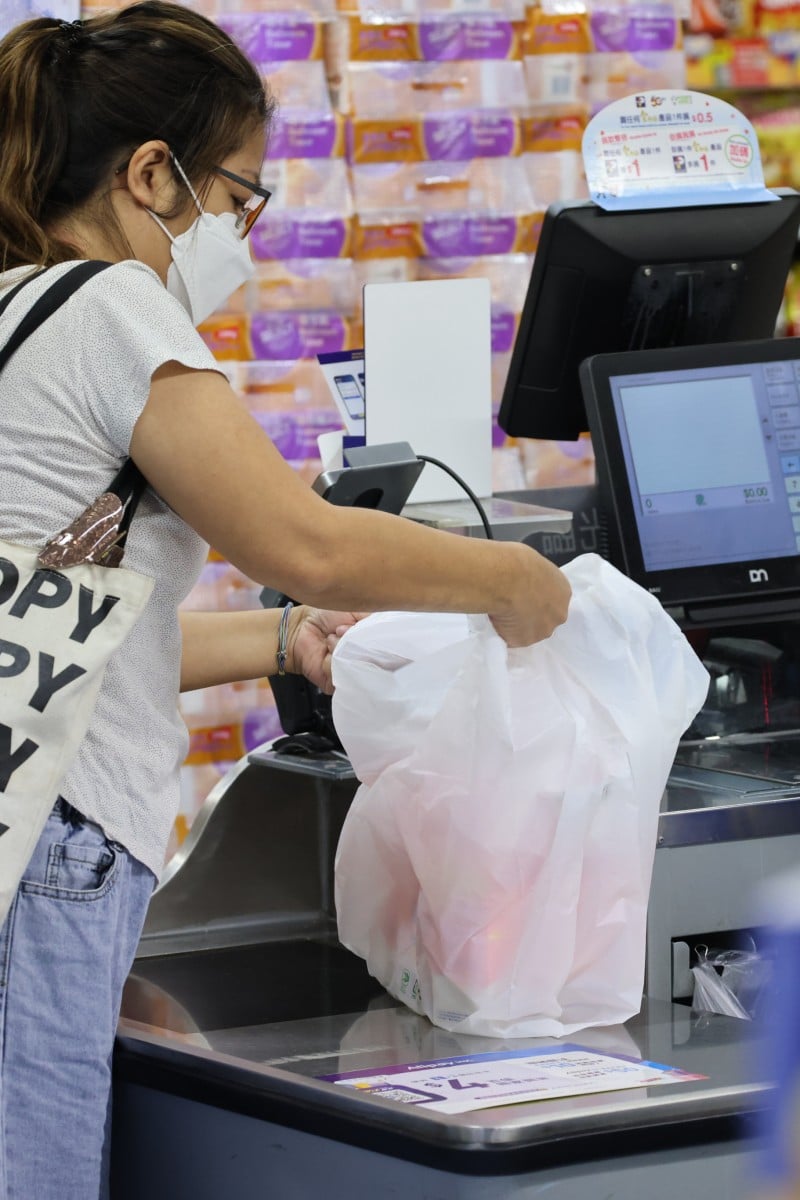 How much can HK$1 really do? All about Hong Kong’s new plastic bag levy and how residents have responded 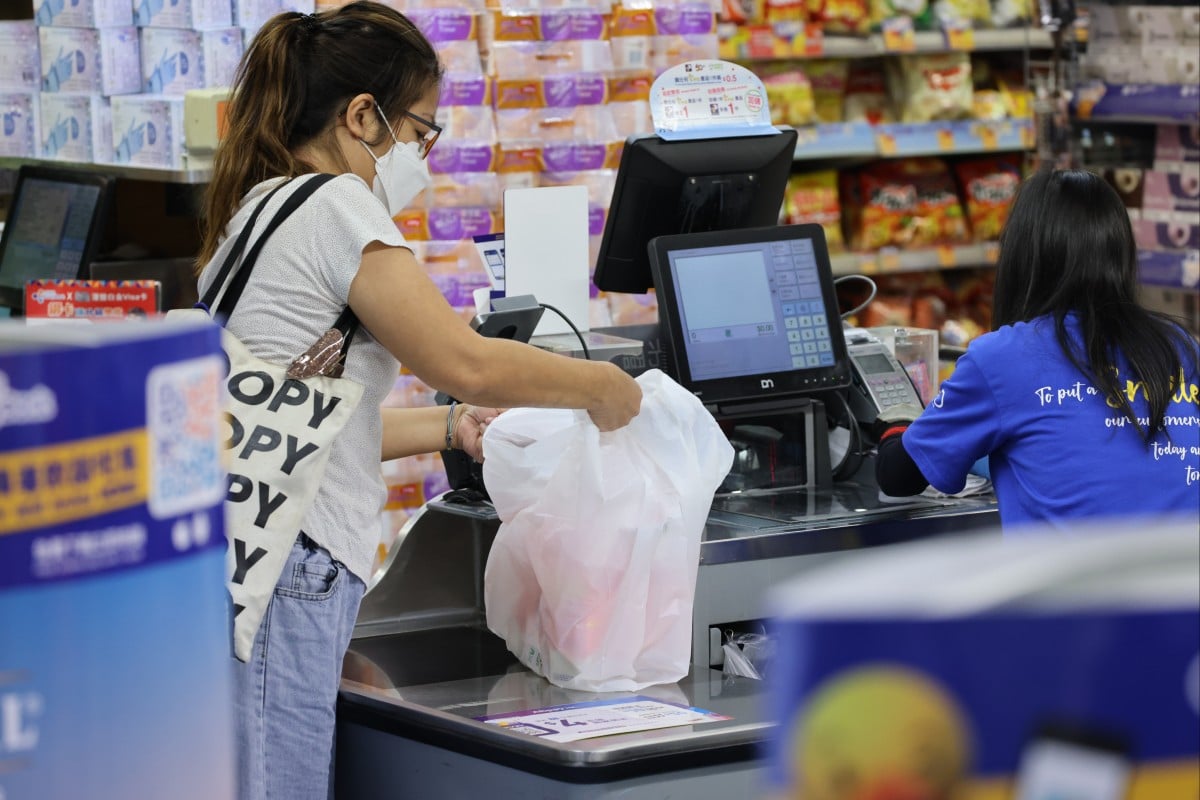 On average, the city produces more than 2,500 tonnes of plastic waste of which shopping bags are the most common type. Photo: Dickson Lee

Hot Topics takes an issue from the news and allows you to analyse different viewpoints on the subject. Our questions encourage you to examine the topic in-depth. Scroll to the bottom of the page for sample answers.

From December 31 last year, Hongkongers started paying HK$1 for each plastic bag they take at supermarkets and wet markets.

All operators would be given a one-month grace period to comply with the new rule, said Bruno Luk Kar-kin, the deputy director of environmental protection. Government workers posing as shoppers would carry out spot checks on enforcement for three months after the levy took effect.

“During the first month’s grace period, we will give advice and verbal warnings to [supermarkets] breaking the law,” he said last month.

According to the government, in 2020, 2,312 tonnes (2,548 tons) of plastic were disposed of daily in landfills. Shopping bags are the most common plastic waste.

Last October, the Legislative Council amended the Product Eco-responsibility Ordinance to increase the plastic bag levy to HK$1. This was up from 50 cents. It was the first increase since the law came into effect in 2009.

Under the stepped-up regulations, certain previously allowed exemptions have been scrapped. Residents are charged at the checkout if they want plastic bags for chilled or frozen items, but they do not need to pay for those used for takeaway food or loose fresh goods.

Operators keep the collected fees. According to Luk, this is because the government does not have enough workers to monitor and gather the money from the more than 100,000 shops required to implement the charge. He called on them to use the money for the environment.

Supermarkets can continue to freely supply plastic bags at their produce or meat sections. But Luk urged the public to follow a general rule of “one purchase, one bag”.

Recycling won’t keep plastic out of our stomachs, lungs or blood, say experts

News: Hongkongers question new HK$1 levy on plastic bags as some shoppers are caught off guard by the new policy

Some Hongkongers have questioned the effectiveness of doubling the government’s levy on plastic bags to HK$1 after a few shoppers were caught unaware.

Signs were placed in the self-checkout and cashiers’ areas of stores to remind shoppers they would have to pay more for plastic bags and could no longer receive them for free when buying pre-packed produce or meat.

Among residents saying they were unaware of the new regulations was homemaker Catherine Xu, 52, who was shopping at upscale supermarket chain City’super.

“I had no idea about the charge. I don’t feel its effect either,” she said. “I tried to bring my own bag when the scheme started, but I’ve gradually given up and become desensitised to it.”

Some shoppers say the HK$1 fee for each plastic bag is not enough to deter them. Photo: Elson Li

Some shoppers said they felt the levy was useless and would not deter people from using plastic bags.

“I use those shopping bags in place of garbage bags at home,” social worker Louis Leung said. “I won’t be deterred until the levy is increased to HK$10. Now, HK$1 is nothing.”

Online store owner Dorothy Wong, 40, said she felt the levy would not make a difference and taxing people was not the right way to protect the environment.

“I bring my own bags, and I bring my own boxes most of the time when buying takeaways. But I do it because I feel a responsibility to do so,” she said.

Face Off: Should we be charged for our household waste?

“Hong Kong is a rather affluent society. Monetary punishment doesn’t work. But if increasing the charge can encourage people to start buying unpackaged or loose food products, it is not a bad thing.”

Local NGO the Society for Community Organisation (SoCO) said it did not support the increased charges, but the fees could remind people to use less plastic.

Your Voice: Why you should ditch single-use plastics (short letters)

A charge on plastic shopping bags should be increased to at least HK$2, a Hong Kong environmental group has said.

Greeners Action conducted field studies at 50 supermarkets in Hong Kong from June 13 to June 23 and found some stores had “indiscriminately” distributed plastic bags without making consumers pay the fee.

Based on its findings, the NGO deduced that all 694 supermarkets in Hong Kong were distributing about 170 million plastic bags every year. The group said this amount could cover an area as large as 125 Victoria Parks, which is a 19-hectare park in Causeway Bay.

Angus Ho, the executive director of Greeners Action, reveals the findings of a survey about supermarket plastic bag usage at a press conference. Photo: Dickson Lee

Greeners Action also found that three-fourths of 771 respondents surveyed between June 21 and June 27 said the current levy should be increased to at least HK$2 to deter consumers from using plastic bags.

“We think that the proposed increase in the plastic bag levy was too lame and almost of no use,” executive director of Greeners Action Angus Ho Hon-wai said. “We were surprised by the findings because 41 per cent of the respondents agreed to raise the levy to HK$5.”

Hot Topics: How our fight against Covid-19 has increased plastic waste

According to statistics from the Environmental Protection Department, the use of plastic shopping bags declined by about 80 per cent in the first year following the introduction of the levy, but has since rebounded.

“More than a decade ago, Hong Kong was so advanced because other countries did not even have such laws to regulate plastic bags. It was effective,” Ho said.

In Britain, a plastic bag fee is also collected directly by stores with a strong expectation that money raised will go to environmental causes. But retailers in Ireland must pass on the levy to the government for every bag sold.

Ho added that Canada would implement a ban on manufacturing and importing single-use plastics by the end of this year. “I think the [Hong Kong] government should consider a universal ban too,” he said.

an environmental scheme to reduce the use of plastic shopping bags in Hong Kong. In 2009, the Environmental Protection Department asked about 3,000 retail outlets to start charging 50 cents per bag. This was extended to all shops in 2015, following a three-month public consultation. Legco doubled the charge to HK$1 per bag in October 2022.

Taiwan banned retailers from giving shoppers free bags in 2002. It announced in 2018 that it would introduce a blanket ban in 2030 on plastic bags, as well as disposable utensils and cups. Mainland China implemented a plastic bag levy in 2008, charging 20 fen (23 HK cents) per bag. South Korea banned supermarkets and shopping malls from giving out plastic bags in 2018. Macau started charging 1 pataca (97 HK cents) per plastic bag in 2019. It will stop importing disposable plastic tableware from January 1. Japan charges shoppers between 2 and 10 yen (11 to 59 HK cents) based on the bag’s use and size.

operates and implements Hong Kong’s producer responsibility schemes (PRS). The ordinance was enacted in July 2008. Its schemes include the plastic bag levy scheme, the PRS on proper disposal of waste electrical and electronic equipment, as well as the PRS to promote recycling glass drink containers.