The biennial event will host some 6,000 participants from more than 100 countries 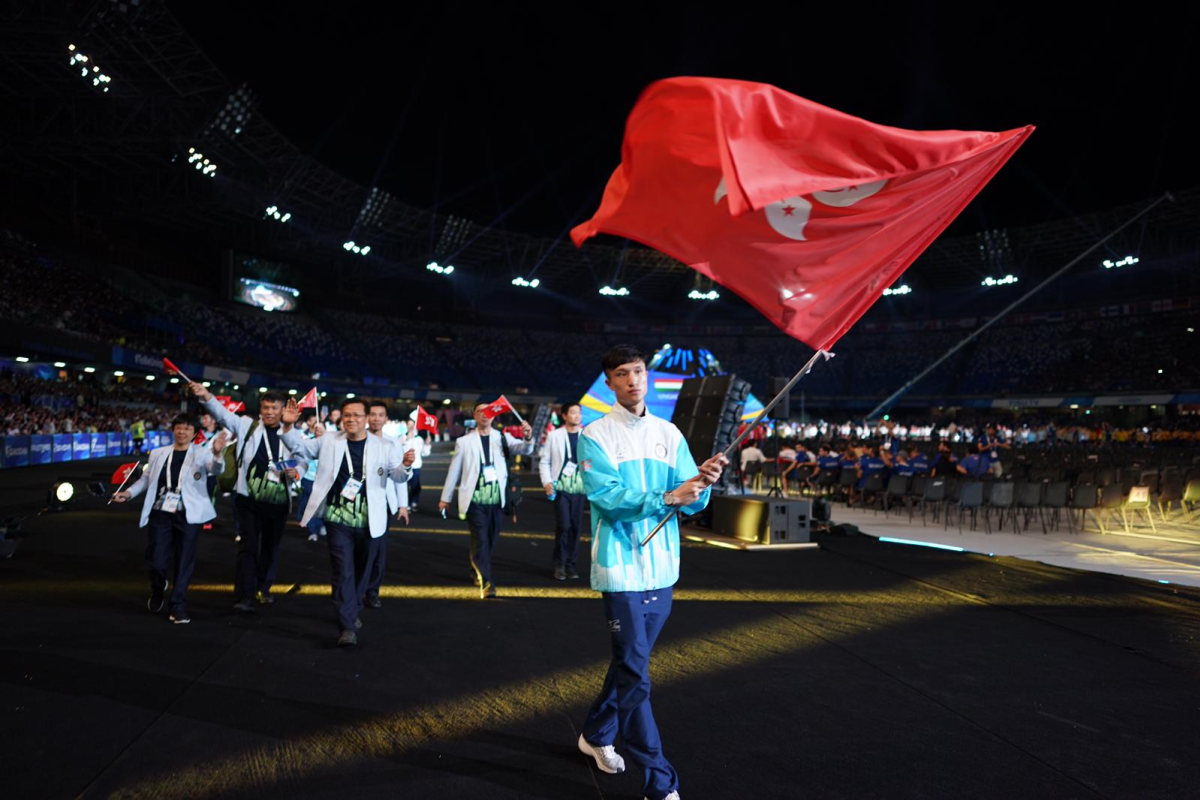 Hong Kong fencer Ryan Choi Chun-yin was the flag bearer for the city at the Opening Ceremony of the 30th Summer Universiade.

The 30th Summer Universiade has officially commenced in Naples, Italy, with the Opening Ceremony taking place in San Paolo Stadium on Wednesday night. Also known as the World University Games, the biennial event will host some 6,000 student athletes from more than 100 countries battling in 18 sports.

Hong Kong sent a team of 79 athletes and officials to Italy for the 12-day event, and the first events our city's athlete will compete in include fencing, swimming, gymnastics, shooting and table tennis on July 4.

Choi won both a gold and silver medal at the 2014 Youth Olympic Games in Nanjing, China.

The 21-year-old reached a career high this year after clinching a bronze medal at the Shanghai Grand Prix in May. He and his teammates also made history for the city in April, when they earned a silver medal in the team event at the St. Petersburg World Cup in Russia. At last month’s Asian Fencing Championships in Tokyo, Japan, Choi finished in eighth place in the individual event and won a bronze in the team event.

In a phone interview with Young Post after the ceremony, the University of Hong Kong student, who also participated in the Summer Universiade in Taipei two years ago, said being chosen as the flag bearer went beyond his wildest dreams, but he was very proud to be able to represent the city.

“I was actually quite nervous before the ceremony, I just wanted to make sure I wouldn’t drop the flag,” said Choi, who currently ranks 23rd in the world.

The fencer went on to say that he was most impressed by the atmosphere at the ceremony, particularly when the audience began cheering fervently for the home team, Italy, as they entered the stadium.

“The opening ceremony was amazing, I got goosebumps when the crowd cheered for team Italy. I wish I could feel this atmosphere in Hong Kong,” he said.

Choi will fence on July 6 in the men’s foil individual event as the top seed, since he has the highest world ranking among the 67 contenders. But the HKU student said he does not want to think about his seeding too much, he simply wants to enjoy the competition.

“I don’t have any target for myself. To me, the process is more important than the result,” he said.

“I’ve been away from home for overseas training and competitions these days, but I really want to tell Hong Kong to add oil too,” he added.

At the last Summer Universiade held in Taipei in 2017, Hong Kong team bagged a total of two gold and two bronze medals. The two golds came from Olympian swimmer Siobhan Haughey in the 100m and 200m freestyle, while the bronze medals were from tennis men’s doubles pair Kevin Wong Chun-hun and Brian Yeung Pak-long, and wushu athlete Juanita Mok Uen-ying.