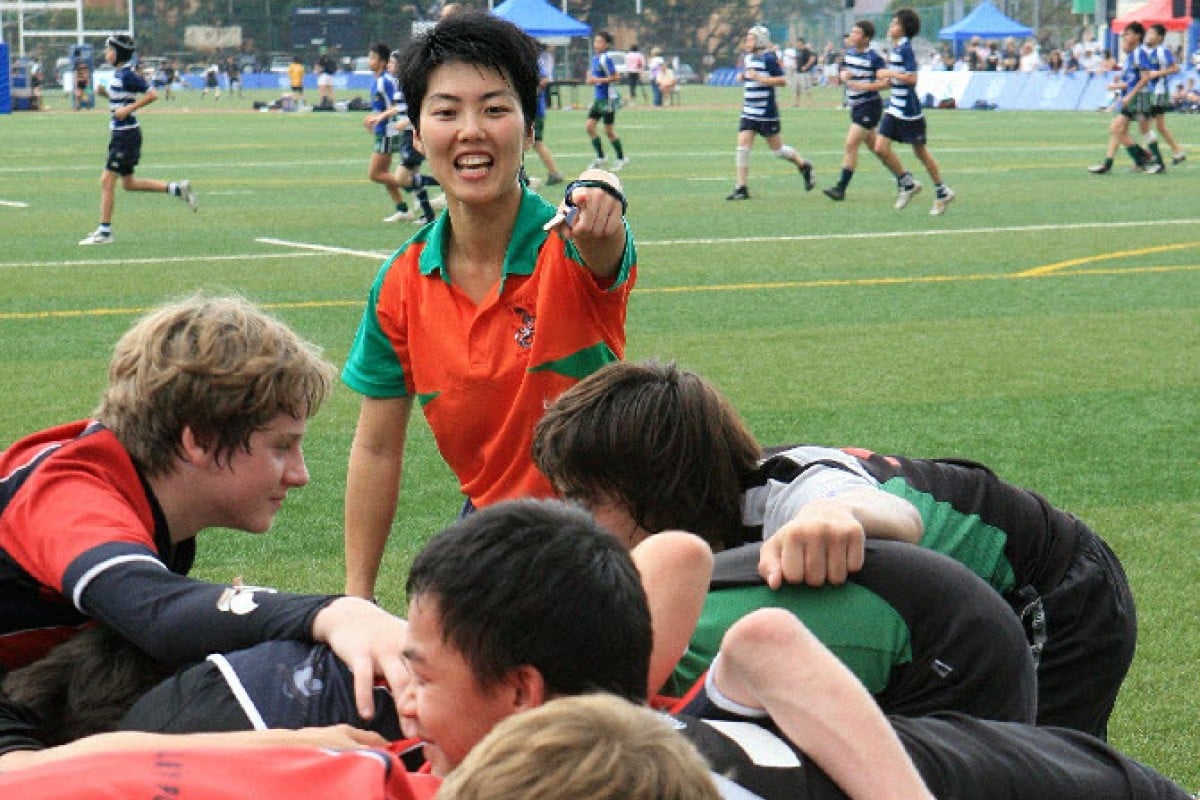 Running around with an egg-shaped ball - or rugby - has traditionally been viewed as a very masculine sport. But for Gabriel Lee Wing-yi, a female rugby referee, it doesn't matter whether you're a guy or a girl - you can succeed as long as you love the game.

The teacher got in touch with the Hong Kong Rugby Football Union (HKRFU), who sent a coach to to the school to teach the game.

Lee enjoyed it so much she joined a summer course organised by the HKRFU, then attended a youth training programme to learn more about the game and improve her skills.

Playing for both sevens and 15s teams, Lee represented Hong Kong at home and away from 1999 until 2006.

While Lee will be appearing on the pitch during this weekend's Hong Kong Rugby Sevens, she won't be representing her hometown. In fact, she won't be playing at all.

"I'm going to be assistant referee for the men's games during the Sevens," she says.

Lee started refereeing in 2004, after attending a training course organised by the HKRFU. "I decided I needed to see another side of rugby, something I hadn't touched before."

She started training regularly with her refereeing coach Bernard Fienberg, who spent extra time with her, as she was the first female to take the course. She decided she wanted to referee international games.

Lee, who has a full-time job as an immigration officer, stopped playing competitive rugby in 2007. She was a player and referee for three years, but the transition wasn't easy. "When I first started [refereeing], players didn't really trust me. I was young, Asian and female, and they would question my rulings," says Lee.

"But once they realised I knew the rules, they didn't challenge me anymore. It was no longer an issue that I was female."

Lee has refereed overseas, too, at the Singapore Sevens last October and the first-ever Women's Rugby World Cup Sevens in Dubai earlier this month.

"It was the first women's sevens World Cup, so it was really historic," she says. "I refereed three pool matches, a quarter-final and the Cup final. I really didn't expect to go to the final - from past experience, women get a man to do the Cup final, so I was really proud as a Hong Kong person, and a Chinese woman, to get that opportunity."

Lee says the biggest challenge for female referees is fitness. "I do all kinds of running - long-distance and sprints - and sit-ups to keep fit. I hate to go to the gym, so I don't do weights."

She will be an assistant referee today and tomorrow at the Hong Kong Sevens, and wait to see if the referee coach picks her for matches on Sunday.

"I'd really like to assistant referee the Cup final. I'd like to see South Africa in the final - and I'd love to be on the pitch!"