Led by star players Liam Doyle, Callum Beattie and Samuel Pijpers, South Island came back from behind to clinch the Jing Ying title 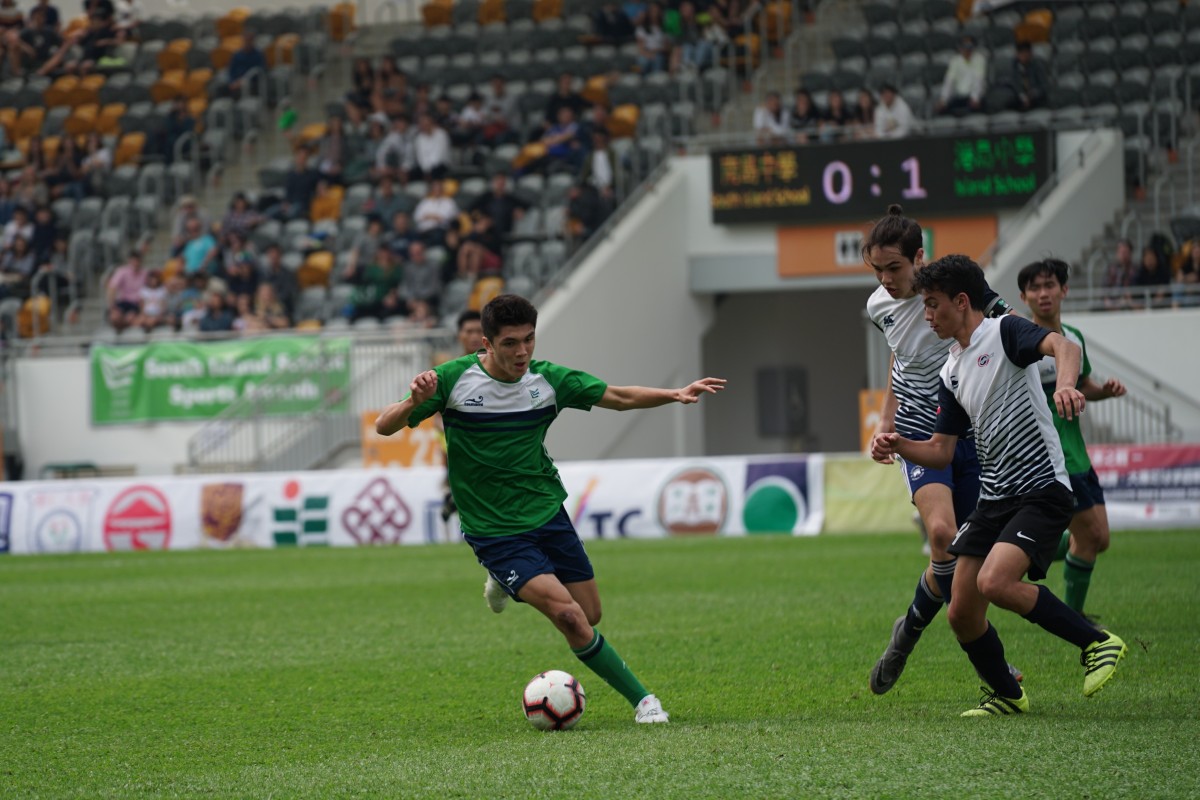 South Island's Liam Doyle (left), who scored the equaliser in the second half, was awarded the MVP at the tournament.

Last Sunday, South Island School defeated Island School 2-1 in the final of the All Hong Kong Schools Jing Ying Football Tournament at Mong Kok Stadium. As the team celebrated its win, Young Post spoke to the MVP, Best Defender, and Best Scorer of the tournament.

Fifteen-year-old South Island player Liam Doyle, who was named MVP, says the exhilaration of winning the Jing Ying title lingers on after the final whistle.

“I’ve never been in that kind of atmosphere: a big stadium and crowd. I still remember everything from it,” says the Japanese-Irish player, who scored the equaliser for South Island in the second half.

When Liam’s teammate, Oliver Lam, put South Island School ahead of its rivals with a second goal, the team dared to hope for a win. Ten minutes later, the victory was theirs. Although Liam received the Most Valuable Player trophy at the prize presentation, he says the victory had been a team effort.

“My entire team helped me achieve it. The team passed the ball to me quite often – they’re really a bunch of selfless players,” says Liam. “I think to be able to be part of the team is bigger than winning the MVP.”

Liam moved to Hong Kong three years ago from Tokyo. Through football, he’s made a lot of new friends. One of them is Callum Beattie, 17, the Best Defender at the Jing Ying tournament. As well as captaining the South Island football team, Callum plays alongside Liam on Hong Kong Football Club’s First Team.

“The team really looks up to him,” Liam says. “He doesn’t talk a lot but he’s the kind of guy who leads by example. He puts a lot of effort into defence as the centre-back.“Callum is just like the Great Wall; I don’t think [other players] were able to get through him.”

The English player started kicking a ball around the house when he was only two years old. He was greatly influenced by his father, who was a semi-professional player in England. The family moved to Hong Kong when Callum was seven.

Since then, he has been training at Hong Kong Football Club, from under-8 all the way up to the club’s First Team. He says the best thing about football is that it brings a lot of people together. “I think that’s a really important thing. Everyone that plays football should enjoy the game.”

When asked about the most memorable moments of the match – aside from the team’s two goals – Callum can’t help but recall the blunder he made during the first half; he gave away a penalty, which Island School’s Samuel Pijpers, 16, turned into a goal.

“At that point, my confidence definitely dropped a lot,” Callum says. “But then everyone started cheering me up and I got over it. “From giving away a penalty to winning the tournament and getting the Best Defender award … it’s just a massive roller coaster.”

He adds that he’s grateful to his coach, Mr Thurbon, for pulling him aside during the half-time break and encouraging him to get on with the game.

Unlike the two South Island players, who began their football training at a very young age, Samuel only started playing seriously five years ago, when he moved to Hong Kong from the Netherlands. Before that, he played football in the streets with his friends. He played last Sunday’s final despite carrying an ankle injury.

“Representing my school was a big thing, and playing in the final motivated me to continue [despite the pain]. My coach also told me I would make a difference to the team. And the cheering from the crowd also helped,” Samuel says.

He relished playing at Mong Kok Stadium, because his family and friends were able to show up and support the team. Being live on TV was also really cool, he adds.

Calvin Harris on the challenges of playing and studying abroad, sacrifices he's had to make for football, and his family legacy

“All our friends are very proud of us for coming so far [in the tournament] and scoring in the final as well. We’re proud of ourselves, too.” The road to the Mong Kok Stadium wasn’t easy, but it was full of great moments. Samuel has vivid memories of beating West Island School in a game in which he scored a hat-trick.

Winning YMCA of Hong Kong Christian College in the quarter-finals was another unforgettable moment. Island School was behind by one point during the first half of the match, but came back strong in the second half, scoring three goals.

“The journey all the way to the finals has been an amazing experience. Getting to play at a stadium with my friends was really good.”