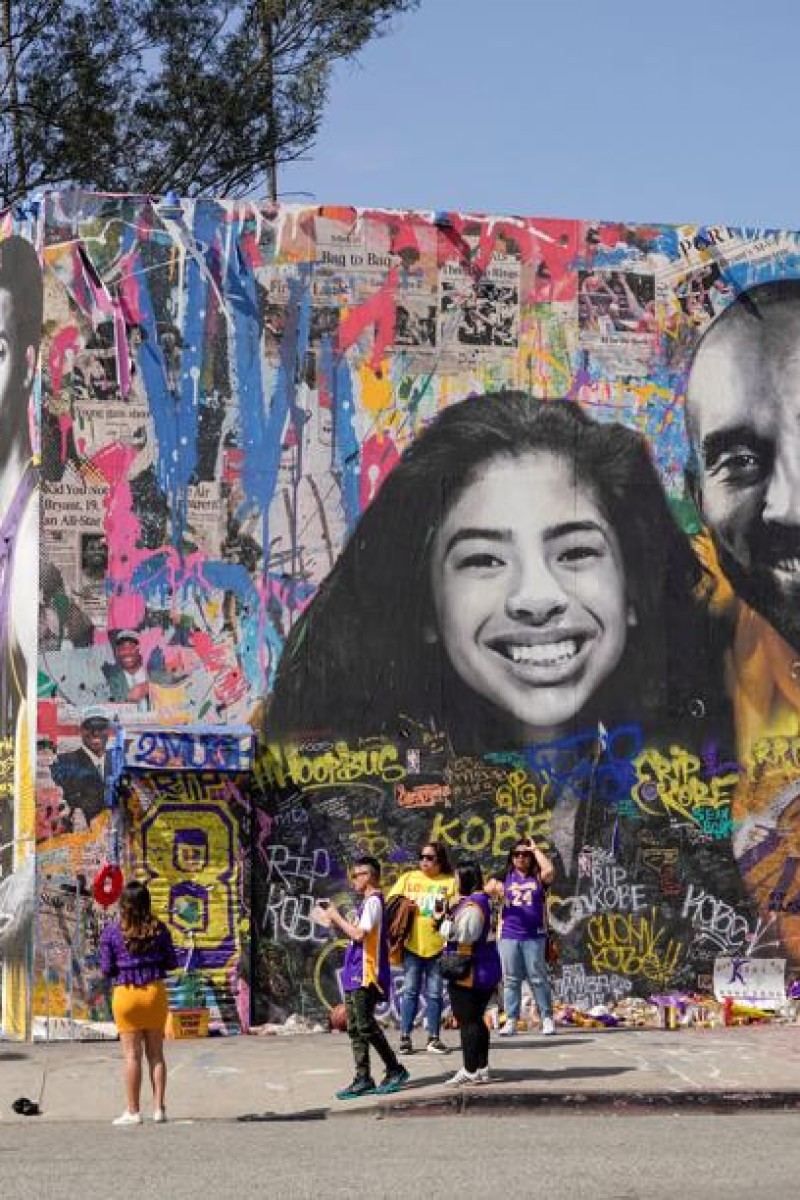 Family, friends and fans celebrated the NBA great and Lakers legend, who died in a helicopter crash last month Fans gather around a mural of late NBA great Kobe Bryant and his daughter Gianna Bryant during a public memorial for them and seven others killed in a helicopter crash, at the Staples Center in Los Angeles.
Vanessa Bryant took the stage in front of about 20,000 people Monday in Staples Center to talk about two loves in her life, her 13-year-old daughter Gianna and her husband Kobe, one of the greatest basketball players of all time.
With tears in her eyes, but a steadfast voice, she spoke of him as a fierce competitor on the basketball court. He was the Black Mamba. A Lakers legend. A writer. An Oscar winner. A celebrity.
But to this young widow he was her “Kobe-Kobe, my boo-boo, my bae-boo, my papi chulo,” she said to the stage-side celebrities and everyday fans in seats high above. “I was his Vivi, his principessa, his reina, his Queen Mamba. … I couldn’t see him as a celebrity, nor just an incredible basketball player. He was my sweet husband, and the beautiful father of our children. He was mine.”
The men that inspired us in 2019
For more that two hours, his memory was alive in the arena revered as the “House That Kobe Built.” Vanessa’s eulogy during the nationally televised memorial was her first public address since the deaths last month of her daughter and husband. Gianna and Bryant were among nine people killed when the helicopter they were taking to Bryant’s Mamba Academy in Thousand Oaks for a youth basketball game slammed into a hillside in Calabasas.
She described how she and Kobe dreamed of getting old together, of being “the fun grandparents” to their daughters’ future children. They had planned to renew their wedding vows, and he recently told her in a text that he wanted to spend more time alone together, just husband and wife.
“We never got the chance to do it,” she said.
Vanessa Bryant reacts during a public memorial for her late husband, NBA great Kobe Bryant, her daughter Gianna and seven others killed in a helicopter crash on January 26.
Photo: Reuters

Her daughter Gianna was a “daddy’s girl, but I know she loves her mama,” Vanessa said.

Gianna kissed her mom goodnight and good morning every day, without fail.
The teenager was a budding basketball star, “competitive like her daddy” and “confident but not in an arrogant way.” She told the boys’ basketball coaches at her school that she was willing to give the boys some pointers.
11 quotes that will inspire you to be a better man
Gianna had an infectious smile, a sarcastic sense of humor. She spoke Mandarin and Spanish. She loved dancing on TikTok videos and had a signature style: white T-shirt, black leggings, denim jacket, white high-top Converse shoes and a flannel shirt tied around her waist.
Vanessa said she knew Kobe and Gianna were together in the afterlife.
“We love and miss you, boo-boo and Gigi,” she said to them. “May you both rest in peace, and have fun in heaven.”
Fans in attendance, many dressed in Kobe jerseys, for the "Celebration of Life for Kobe and Gianna Bryant" service at Staples Center in Los Angeles, California.
Photo: AFP

In the audience, Jennifer Lopez and Michael Jordan wept. Outside, just beyond the tight security and the barricades surrounding L.A. Live, fans honored Bryant in ways small and big, wearing jerseys with his No. 24, releasing doves, and showing off a custom purple Lamborghini featuring a mural of his face.