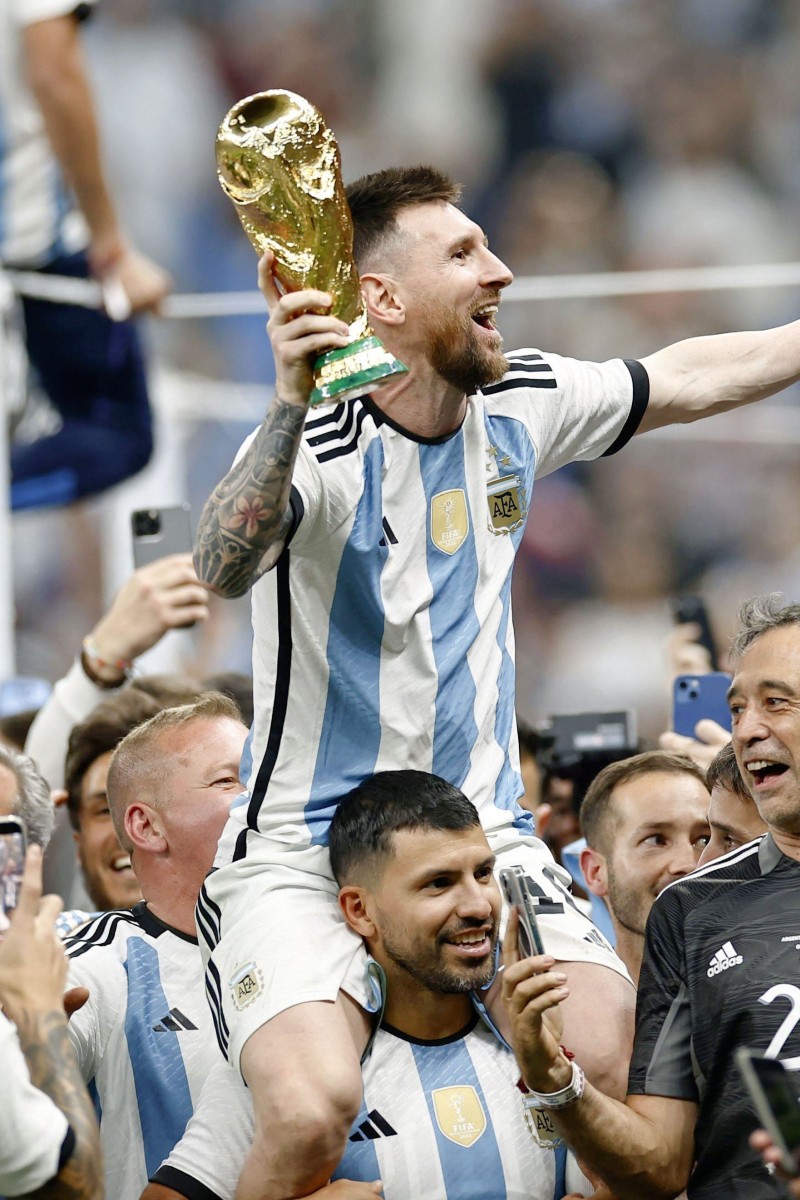 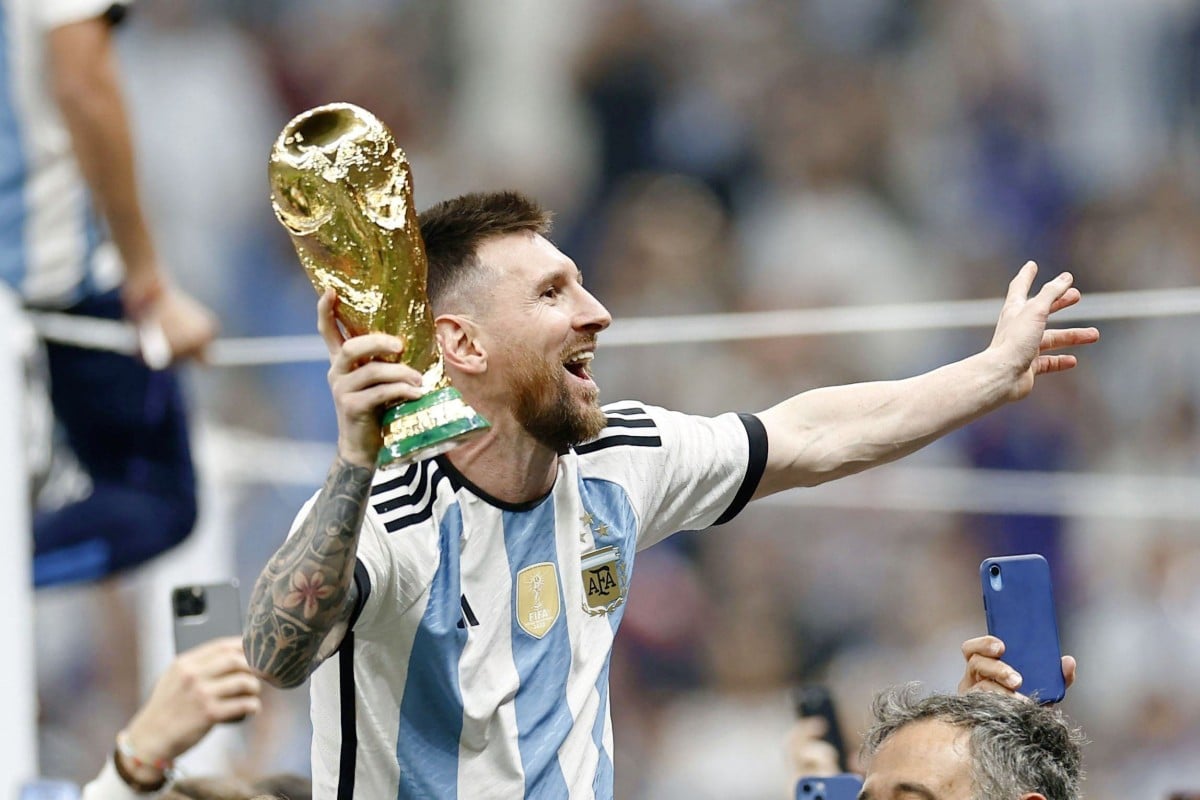 Argentines let loose on Sunday, and streets across the country became places of celebration after an epic World Cup final in which the national team beat France on penalties.

It was the country’s third World Cup title, and the first since 1986.

“I’m very happy, we really deserved this. The team suffered quite a bit, but it recovered as time went on,” said Josefina Villalba, a 55-year-old nanny who joined hundreds of fans at one of the many public plazas in Argentina where giant screens were set up to watch the match.

Millions of Argentines cried, yelled and hugged as they followed the game.

During the match, many watching in a public square in Buenos Aires chanted the name of captain Lionel Messi, often considered the world’s greatest football player who had long talked about how he yearned for a World Cup victory.

“I feel an immense happiness in my heart because this is the first World Cup I truly enjoy,” Hector Quinteros, a 34-year-old security guard, said as his eyes welled up with tears. “They always make us suffer.”

After 36 long years, Argentina finally won a World Cup title, erasing years of doubts about whether a country known for having some of the world’s greatest football players could perform on an international stage. The country won its first title in 1978, but lost finals in 1930, 1990 and 2014.

At the end of the first half, many were gearing up to celebrate as Argentina led 2-0 and clearly dominated the match. But that happiness turned to anxiety as France caught up, leaving the score at 3-3 before Argentina beat France 4-2 on penalties.

For many, the agonising feelings of the match made the victory sweeter.

“When you suffer over something so much, the satisfaction is greater,” Fabio Villani, a 45-year-old video editor said.

It also felt par for the course for Argentina, a country known for its seemingly endless economic crises.

“Suffering is something that is very Argentine,” said Maria Isabel Ayala, a 53-year-old hairdresser. “If we suffer, it’s because we truly feel it in our hearts.”

Fans remembered Argentina great Diego Maradona, who died two years ago. Many said he had something to do with today’s victory.

“Diego sees everything from heaven – he wouldn’t have wanted Argentina to lose. The first cup without him, and we won! Diego is always here,” said Javier López, 18, whose voice broke as he spoke of Maradona, who led the national team to what had been its last World Cup title in 1986.

“Diego is certainly smiling now,” Brazil soccer legend Pelé wrote on social media as he congratulated Argentina for the victory.

In Rosario, Messi’s hometown, a sea of people went out into the streets to celebrate that their local hero had finally won a World Cup title.

“It’s madness. It surpassed my expectations with so many people on the same wavelength, everyone celebrating,” said Jeremías Regolo, 26, who joined the tens of thousands of people who descended on the National Flag Memorial, the symbol of Argentina’s third largest city.

People started arriving after Messi lifted the trophy, and they were still holding strong into the evening.

“We’re champions, which is all we wanted, more than anything for [Messi] and for the whole team,” Santiago Ferraris, 25, said.

Your Voice: Ronaldo getting benched at World Cup was the last straw for many (short letters)

The national squad led by Messi has united a country that has been stuck in economic doldrums for years, that is suffering one of the world’s highest inflation rates and where almost four in 10 live in poverty.

“We’re very happy that they gave us this triumph that the people needed beyond the socioeconomic problems that we’re having,” Gabriel Fernández, a 42-year-old artisan, said as he celebrated the victory surrounded by his family in a Buenos Aires park.

“We needed this – we needed this for all the things that we’re going through economically, politically, socially,” Alberto Czornenki, a 45-year-old retail worker, said as he joined the celebrations in Argentina’s capital.

“We’re then going to wake up to reality, and we’re going to be in the same place, but with a different kind of enthusiasm.”

Fans also had particular praise for this squad coached by Lionel Scaloni.

This team “transmits something that is very different from other squads before that did not feel pride for the national jersey, while these players give everything of themselves in each match”, said Facundo Alonso, a 26-year-old retail worker.

President Alberto Fernández joined in on the celebrations and thanked the national team for the victory.

“Thank you to the players and the technical team. They’re an example that we must never give up. That we have great people and a great future,” Fernández wrote on social media.

On a scorching summer day, the Obelisk in downtown Buenos Aires quickly started filling with people as thousands went downtown to celebrate.

Soon after the end of the match, the subway turned into a party as fans packed the cars, singing, chanting and jumping for joy as they headed to join the celebrations at the Obelisk.

“Holding Leo Messi by the hand, we’re going to go all the way,” the crowd chanted as euphoria took over.