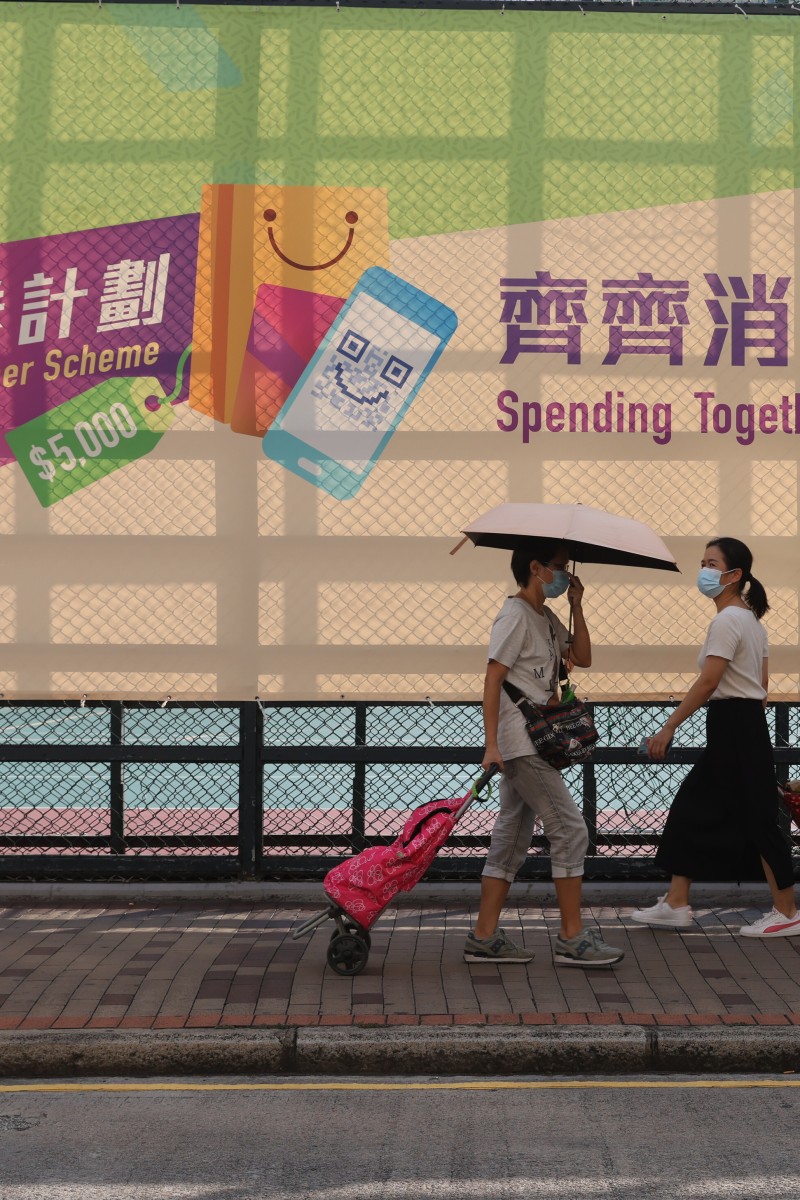 Face off: Should consumer vouchers be given to all Hong Kong permanent residents, regardless of age? The Hong Kong government gave all permanent residents over the age of 18 HK$5,000 in consumption vouchers in 2020. Should they expand the programme next year? Photo: SCMP/ Nora Tam

Almost everyone in Hong Kong is experiencing the economic pain brought about by the coronavirus pandemic.

In 2020, Hong Kong’s economy shrank by 6.1 per cent – the biggest annual contraction on record.

How helpful is the voucher scheme, really?

Therefore, the government said it would issue HK$5,000 worth of consumption vouchers to boost the local economy.

However, only residents aged above 18 would be allowed to apply for the scheme which was launched in July this year.

If the government’s aim is to make people spend more to help speed up the city’s economic recovery, all permanent residents, regardless of age, should be entitled to the e-vouchers.

People were encouraged to spend their vouchers to boost the city’s economy. Photo: SCMP/ Felix Wong

What’s more, is the scheme being fair to families with children in Hong Kong? Under the current eligibility rules, a struggling single parent with two children receives the same amount as a childless millionaire.

Raising children is costly. The HK$5,000 voucher can really help those families buy their daily necessities while providing extra cash to spend on shopping or other activities.

Also, the vouchers can help teenagers learn money management with the guidance of their parents.

According to a 2020 survey conducted by the Hong Kong Institute of Certified Public Accountants involving local students from Primary Four to Secondary Three, 84 per cent of the 1,015 respondents said they have saving habits but only 35 per cent have the habit of tracking their expenses.

Hence, expanding the e-voucher scheme to cover all Hong Kong permanent residents would be beneficial in so many ways for the city’s overall development.

One of them is the HK$5,000 consumption voucher scheme which is expected to give a strong boost to many businesses amid the coronavirus pandemic.

The city’s economy has improved this year so some people say that the e-vouchers should be expanded to cover all Hong Kong permanent residents regardless of their age. I don’t agree.

Many stores held sales to encourage people to shop and spend money at their businesses. Photo: SCMP/ Felix Wong

To begin with, most minors are unaware of their roles and responsibilities. Hence, children and younger teenagers without financial experience would not be able to spend their money wisely. Another problem with the expanded scheme is that the government would not be able to afford it. The authorities already have a lot on their hands, including providing more housing and jobs to the people.

To solve the housing shortage, Chief Executive Carrie Lam Cheng Yuet-ngor has proposed the “Northern Metropolis” plan which is expected to cost hundreds of billions of dollars.

Also, we should not forget low-income families and the jobless in Hong Kong. The government gives them millions of dollars every year so they can meet their basic needs.

Which is better: cash handouts or e-vouchers?

Then there are public services such as building infrastructure and providing top-class medical services for the public.

The government has a lot of money but it has to be careful with its spending.

Though it may look attractive to some people, expanding the consumer vouchers scheme to all permanent residents is not a good idea – it wouldn’t help the government or the people in Hong Kong. The authorities should come up with better plans to respond to the current situation.