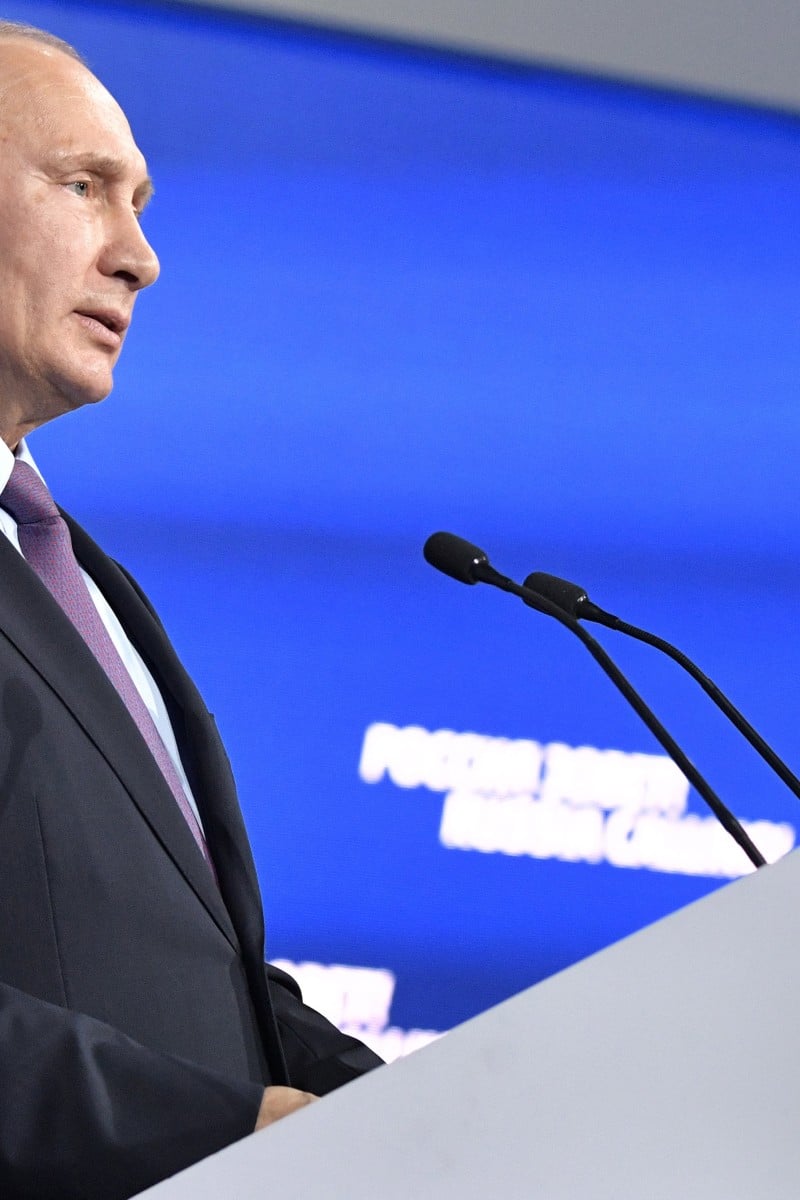 Luckily for Putin, international politics has gone his way and the country has recovered from a perilous fiscal situation, allowing the Russian strongman to showcase his power, both at home and abroad Russian President Vladimir Putin appears to have weathered the economic crisis well and came out of it even more powerful.

Two years ago, things looked dire for Vladimir Putin’s Russia. The country had entered a recession, its currency had plunged, and inflation was rampant. But how things have changed since then.

A recent cover of The Economist featured Putin’s authoritative visage, with his figure decked in regal clothing: the new tsar. His country’s economic future is far from assured, but with the recession seemingly at an end, things are looking up. In this article, we look back at Russia’s economic and currency crisis.

The rouble’s slide began in 2014 after the Russian invasion of Ukraine, and the Western sanctions that followed it. By the end of 2014, the currency was plummeting at an alarming rate. At one stage, it was down 50 per cent for the year against the US dollar, a huge dip in currency markets.

Russia’s crisis was triggered by the plummeting oil prices, which fell as much as 40 per cent. Russia’s economy had failed to diversify significantly: energy exports were responsible for half of government revenue and 60 per cent of exports.

However, the malaise afflicting the Russian economy ran much deeper than the energy sector. Why is this? As American Nobel Prize-winning economist Paul Krugman pointed out, the Russian currency debacle had many parallels with previous crises, such as in Argentina (2002), Indonesia (1998), Mexico (1995), and Chile (1982). The recurrent theme is large-scale borrowing from private corporations, with the debt denominated in a foreign currency, mostly US dollars.

These dollar-denominated debts leave the private sector extremely vulnerable to financial shocks. In Russia, the shock came in the form of a drop in revenues from oil exports. The subsequent drop in demand for the rouble led to a decrease in its value. Russian firms’ revenues were in roubles but their debts – amounting to about US$670 billion – were in dollars. Consequently, their balance sheets suffered, as the weight of their debts shot up in relation to revenues.

In a bid to strengthen the currency, in late 2014, the central bank made a surprise, dead-of-the-night decision to raise interest rates from 10.5 per cent to 17 per cent. It was the largest single rise since 1998, when Russia had defaulted on its debt. A higher interest rate generally strengthens a currency by enticing investors looking for better returns. However, it can also stifle economic growth by discouraging borrowing and investment.

Unfortunately for the Russians, the rate rise did not immediately have its intended effect. It cramped growth, and financial markets saw the move as nothing more than a desperation measure by the central bank. Following a brief rally, the rouble fell to an all-time low. Russia was then faced with the spectre of stagflation, a lethal combination of stagnant economic growth and rampant inflation.

If there was any comfort for Russia, it was in the country’s reserves of more than US$400 billion, built up during the years of high oil prices. The deputy finance minister, Alexei Moiseev, declared the government’s commitment to selling “as much as we need” to prop up the rouble. Billions were spent supporting the currency. In theory, selling dollars to buy roubles will push up the currency by boosting the demand for roubles in the market, while increasing the supply of dollars. The move is also meant to send a signal that the central bank will do whatever it takes to defend the currency, thereby discouraging speculation against the rouble. Many economists were also unconvinced that Russia’s reserves were readily available. Only about half of the money is estimated to be easily accessible, with a large portion of the reserves tied up in long-term investments.

Western sanctions piled on the pain. Russia had to set up a system to bail out companies cut off from Western financing, with the money coming from Russia’s sovereign wealth funds. This exerted more strain on Russia’s dollar reserves, thereby further limiting its ability to continue supporting the currency.

Generally, a country in Russia’s situation would have turned to the International Monetary Fund (IMF) for emergency loans in exchange for economic reforms. But this was always very unlikely; there was little chance that Putin would agree to Western bailout terms. There were fears that the Russian government would, in desperation, impose capital controls. These prevent money from leaving the country and limit the rouble’s convertibility, thus stemming any further drop in the currency. Capital controls would have been a last-ditch measure, and are certainly not advisable. They would have destroyed any last shred of confidence in the Russian economy and spooked foreign investors.

Is Putin a judo fraud?

Ultimately, Russia did not have to seek assistance from the IMF to stabilise its economy. The government settled on a flexible exchange rate policy, mitigating the possibility of a speculative attack and crisis of confidence that could have occurred if it had tried to aggressively defend the rouble through capital controls. A World Bank analysis also credits a round of expenditure cuts and budget rebalancing by the government as being positive influences on the economy. In addition, banks were recapitalised by the government, with the money injected into the system to avert a potential collapse. Finally, the economic recovery was assisted by a partial recovery of oil prices. Meanwhile, budgetary changes were also introduced, reducing the sensitivity of the economy to lower oil prices.

Russia was teetering in late 2014, and many commentators predicted a lengthy period of economic stagnation. But Putin insisted that the economy would “rebound within two years”. He was right. And luckily for the strongman, international political events have gone in his favour, allowing him to showcase his power, both domestically and internationally. The country is no longer in crisis mode, and Putin has emerged with an even firmer grip on power.