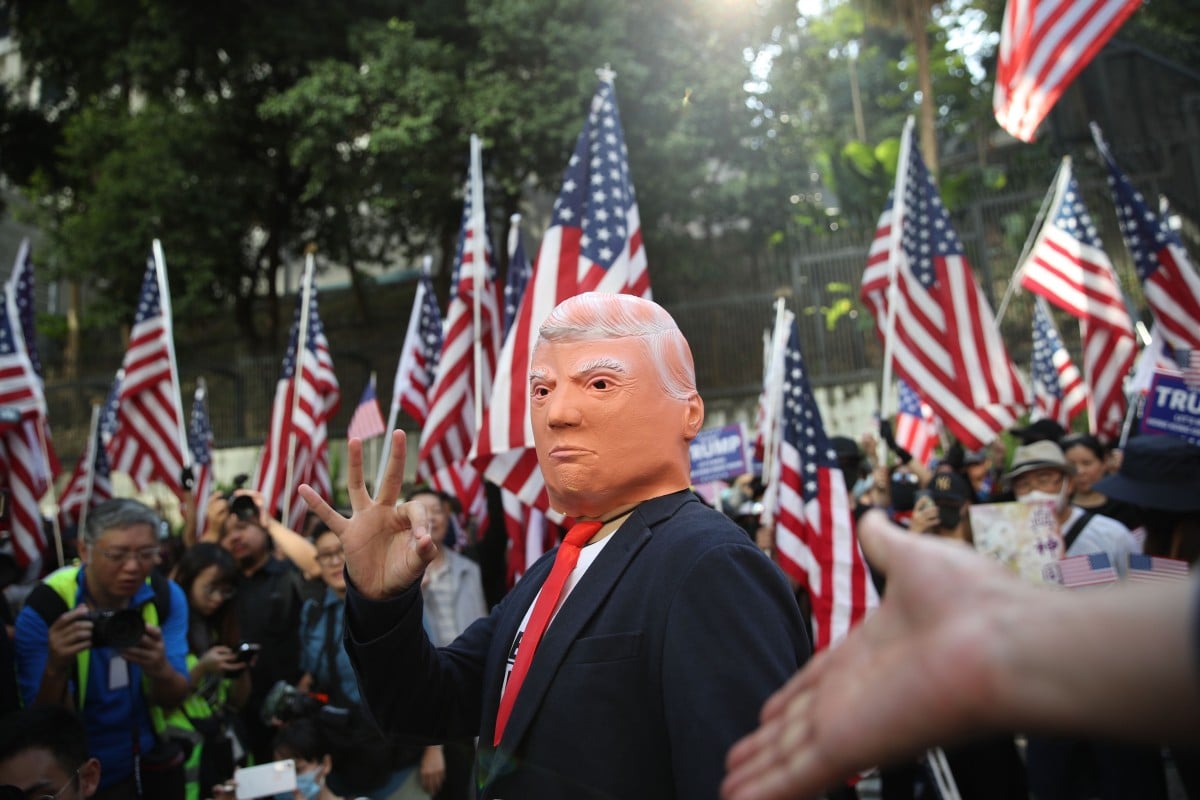 A Donald Trump impersonator stands with people gathering at Chater Garden for a “Thank You US” rally after President Trump signed the Hong Kong Human Rights and Democracy Act. Photo: SCMP/ Winson Wong

Hong Kong should not be worried by America’s threat to strip the city’s special trading privileges. Contrary to suggestions by some poorly informed individuals, Hong Kong’s trading status is solely the product of Beijing’s policies towards the city and the US move is unlikely to have a noticeable impact.

US President Donald Trump is a paper tiger and should be treated as such.

The claim that Hong Kong’s special trading status is a product of US policy is wrong. The existence of Hong Kong as a distinct economic entity is the product of legislation by the National People’s Congress. By enacting Hong Kong’s Basic Law, China’s legislature has granted powers to the local government to establish independent policies and join international institutions such as the World Trade Organisation.

The border between Hong Kong and the mainland is a manifestation of the different tariff and trade policies adopted by the two jurisdictions. More than anything, the border is there to ensure that the correct tariffs and restrictions can be applied in each place. What’s more, as Beijing’s preferential trade policies towards Hong Kong will remain the same, all imports from Hong Kong to the mainland will still be exempt from tariffs. Neither the proposed national security law nor future US policy can affect this.

The possibility that Hong Kong will no longer be treated as a separate customs and travel territory from the rest of China will have limited effect.

According to government statistics, only 0.1 per cent of the city’s total exports and 2 per cent of the city’s manufacturing go to the US. The US also has a US$300 billion trade surplus with Hong Kong, meaning that they sell significantly more goods to us than we sell to them. As Hong Kong’s economy is dominated by the services sector, which mainly serves mainland clients, there are no real worries about the potential loss of income from reduced demand. This analysis broadly echoes the assessments of major banks such as JP Morgan, UBS, and Citi Group. There is no “economic Armageddon” to speak of.

Hong Kong is, in fact, likely to benefit from a US that is more hostile towards China.

Despite the political turmoil, Hong Kong remained the world’s largest capital-raising market last year. This is likely to continue as restrictions against Chinese companies in the US will encourage them to have secondary listings on the Hong Kong stock exchange or retreat to Hong Kong entirely. Combined with the city’s increased integration with the Greater Bay Area, Hong Kong is likely to become a stronger international financial centre.

The fundamentals of Hong Kong’s economy, such as the free flow of capital, the existence of robust dispute resolution mechanisms and a sound legal system, remain strong.

As with every crisis in the past, Hong Kong will persevere and make the most of a difficult situation.