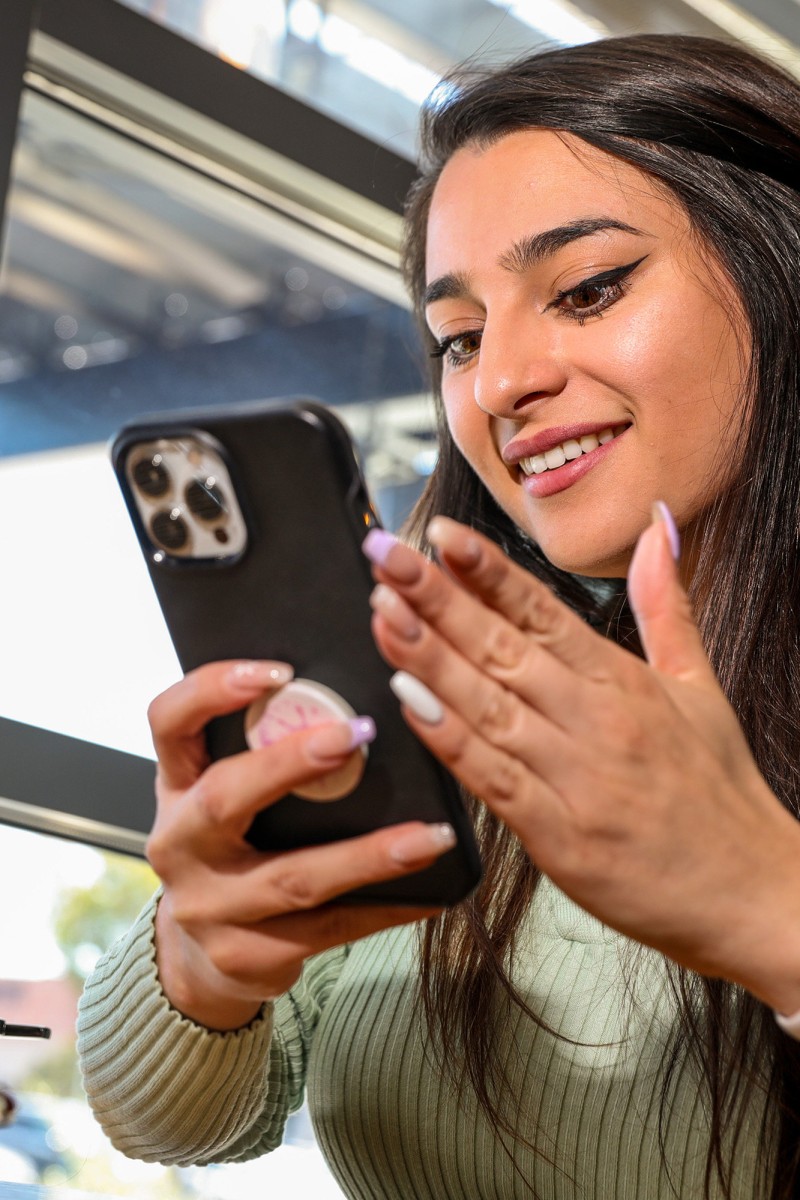 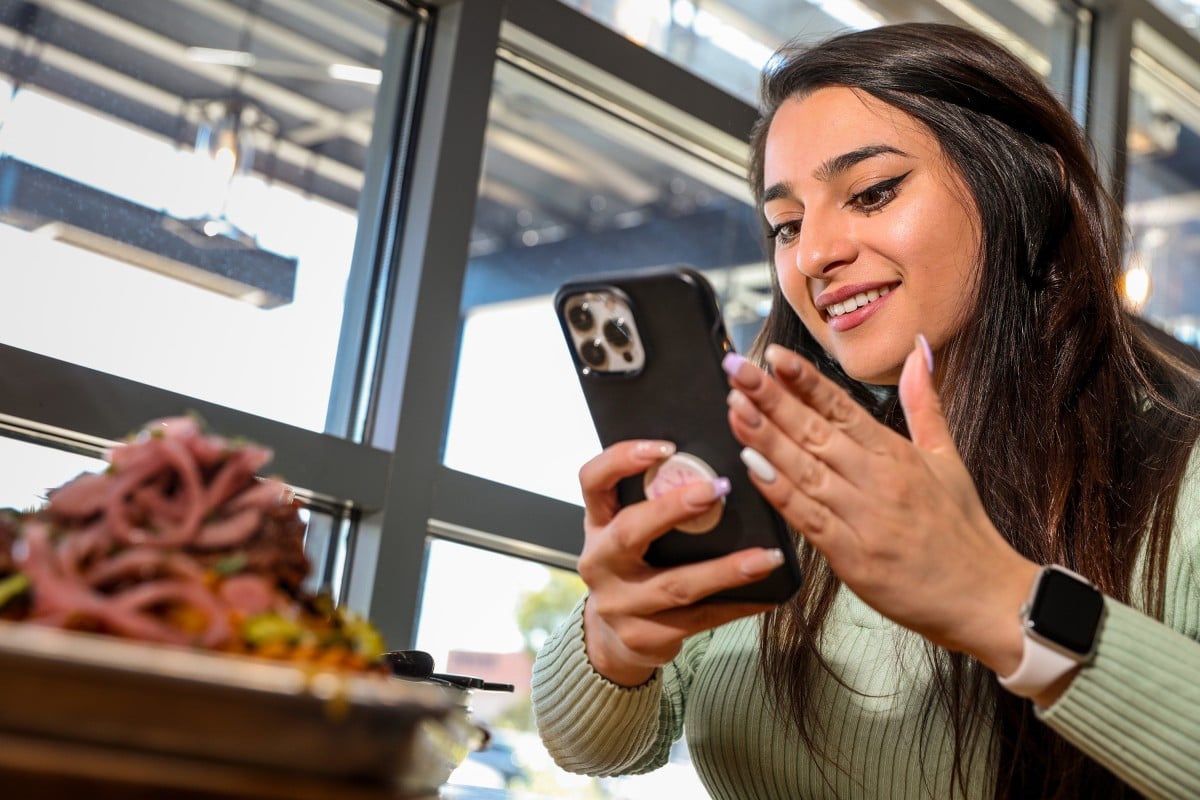 US food influencer Ashley Rodriguez captures footage at the restaurant Craft by Smoke and Fire in California. Photo: TNS

[1] Food critics, move over. If the right influencer posts a video of your food and it goes viral, it can bring a noticeable increase in revenue for your restaurant. And no one knows that better than Joel Gonzalez.

[2] Gonzalez had never seen anything like it in more than 20 years at his family’s restaurant. At 6pm on March 25, there was a line stretching out the door of Mariscos Corona, which he runs with his sister in the US city of Los Angeles. For the next two hours, the siblings did their best to manage the surge of customers all wanting the restaurant’s signature dishes: aguachile-stuffed avocados and surf-and-turf burritos.

[3] “Oh my God, we had such a rush” until closing time, Gonzalez said. “We had never seen a line out the door like that before.” The next day, a Friday, there was another line – and the onslaught of customers continued through the weekend. The restaurant’s Instagram account gained 5,000 followers. Gonzalez ran out of avocados. Eventually, even his refrigerator was empty. He could not open on Monday.

[4] What Gonzalez did not know, when the rush started, was that Ashley Rodriguez, 29, a food influencer known as @firstdateguide, had posted a TikTok video featuring his dishes – avocados overflowing with seafood, and a giant grilled burrito stuffed with shrimp, carne asada (grilled beef) and French fries – earlier in the day. At one point in the video, which gained 1 million views in a week, Rodriguez poured an entire cup of red salsa onto the burrito, took a big bite and nodded enthusiastically.

[5] This is the food influencer effect – or what it can be. If the right influencer posts a video of your food and it goes viral, it can lead to a larger social following and a noticeable increase in revenue. It is a phenomenon that is causing a paradigm shift in the restaurant world, transferring the power of influence from traditional media to anyone with a mobile phone and a love of food.

[6] Food influencers come in many varieties: there are the home cooks who post how-to videos of dishes, mukbang-ers who live-stream themselves eating, newbies looking for free food, marketing professionals with restaurant clients, gourmands who review food in their cars and food obsessives who just like to share what they are eating.

[7] In Hong Kong, social media influencers are more commonly referred to as KOLs (key opinion leaders) and are often approached to help promote products, restaurants and services. According to a report by AnyTag, a Tokyo-based influencer marketing platform, the most used social media platform for food and drink KOLs is Instagram, with a 61.97 per cent share, followed by Facebook with 31.23 per cent. The fastest-growing influencer accounts in Hong Kong include food and drink.

[8] Local luxury food and beverage brands have also tapped into micro-influencers (with followings of between 10,000 and 100,000 users) to share promotional messages on their platforms, with the hope of spreading brand awareness and conversions. So important is KOL marketing that, for the first time, the Hong Kong Trade and Development Council invited a roster of influencers to live-stream their food and drink picks during the annual Food Expo in August, with exhibitors reporting increased sales following the broadcast. Source: Tribune News Agency, October 2

1. Paragraph 1 suggests “food critics” are ... A. no longer as important as they used to be. B. looking to do their job in a different way. C. in full control over the food and beverage industry. D. transitioning into the role of influencers.

2. Find a word in paragraph 2 that means “sudden increase”.

3. What TWO dishes are Mariscos Corona famous for? (2 marks)

4. What information in paragraph 3 shows that the restaurant could not handle the increase in diners?

5. Which of the following terms best describes the video posted in paragraph 4? A. divine B. mouthwatering C. tempting D. all of the above

6. In paragraph 5, what does the “paradigm shift” refer to?

7. According to paragraph 7, how do most KOLs prefer to promote food and drink products?

8. How has the Hong Kong Trade and Development Council leveraged the popularity of food influencers?

9. Decide whether the following statements are True, False, or if the information is Not Given in the text. Blacken ONE circle only for each statement. (4 marks) (i) Mariscos Corona opened its second outlet soon after Rodriguez’s TikTok video went viral. (ii) The term “food influencer” strictly refers to those who give honest, credible recommendations on where and what to eat. (iii) Gonzalez hired Rodriguez to promote his restaurant’s food after watching her TikTok videos. (iv) Hong Kong’s influencers likely helped brands at this year’s Food Expo attract more customers.

Mariscos Corona in Los Angeles is famous for their surf-and-turf burrito. Photo: TNS

1. A 2. surge 3. aguachile-stuffed avocados and surf-and-turf burritos 4. Gonzalez ran out of avocadoes, and his refrigerator was empty. The restaurant could not open on Monday. 5. D 6. the transfer of power from traditional media to food influencers / the transfer of power from traditional media to anyone with a mobile phone and a love of food (any one) 7. via Instagram 8. It invited a roster of influencers to live-stream their food and drink picks during the annual Food Expo in August. 9. (i) NG; (ii) F; (iii) F; (iv) T