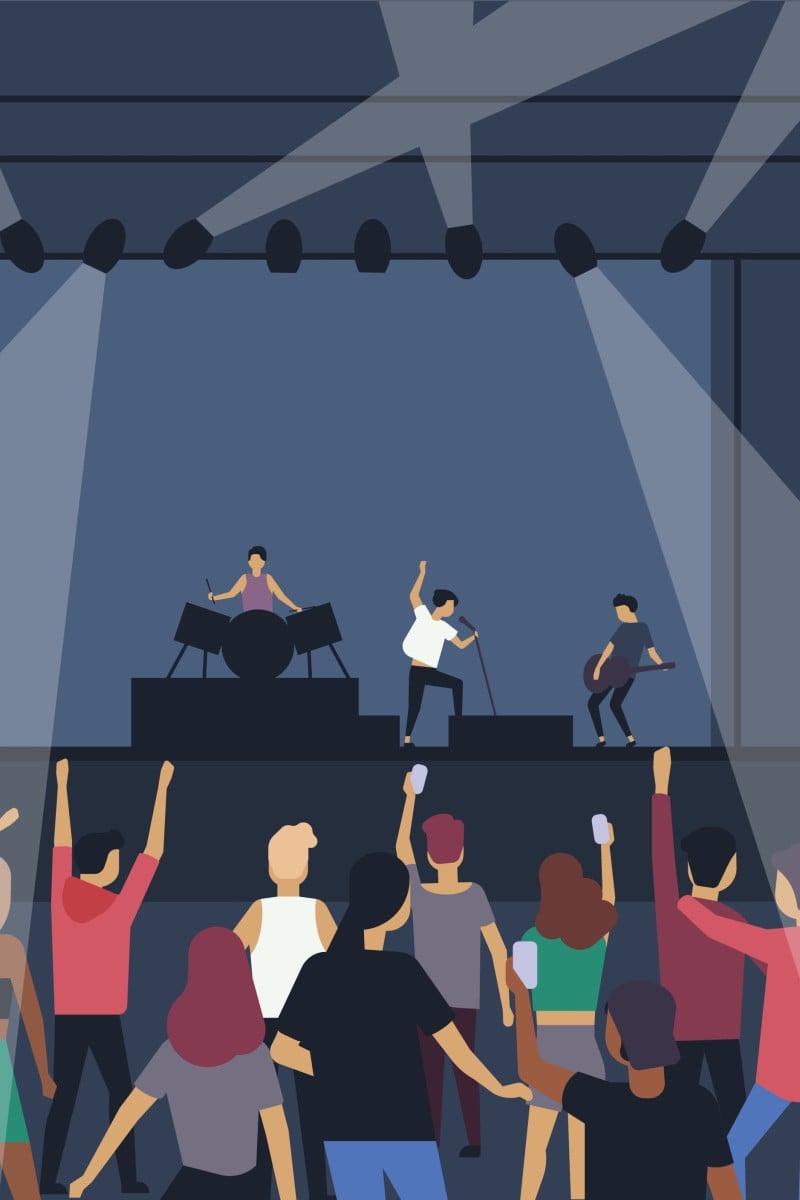 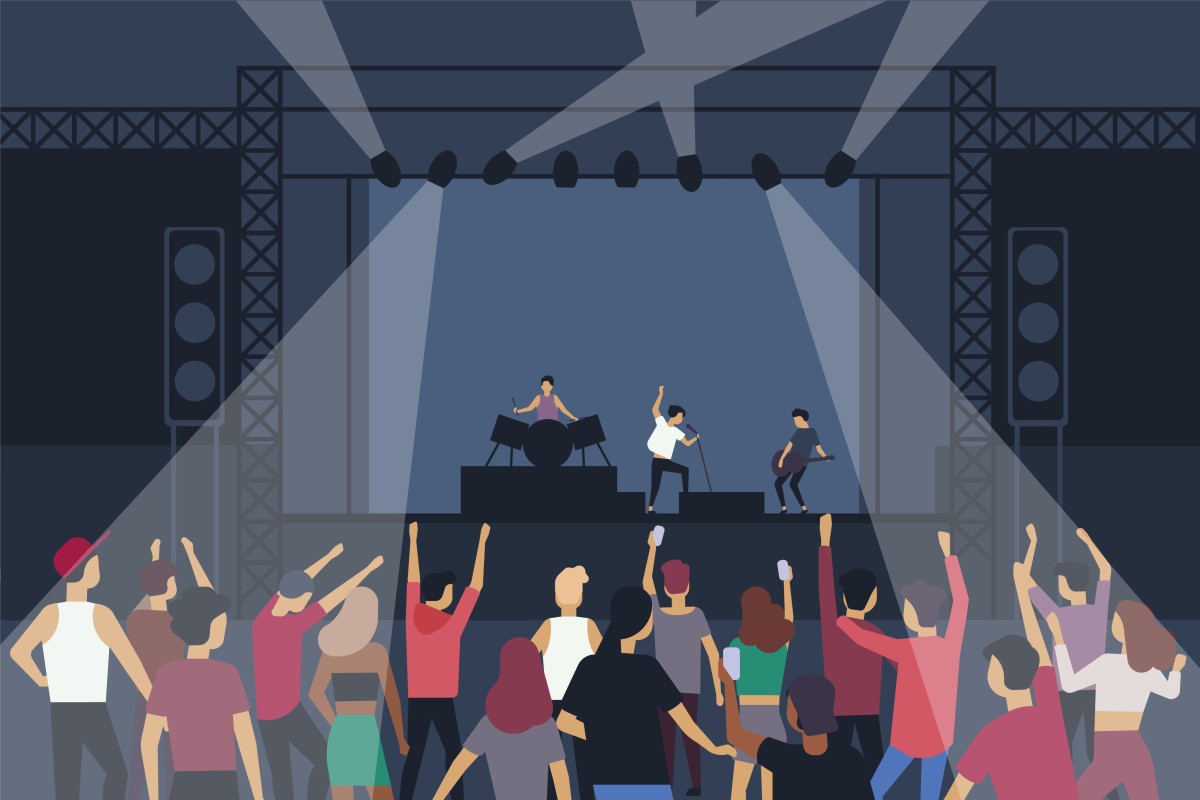 This week’s listening exercise features an interview with the lead singer of a band. Photo: Shutterstock

2. How did Two Street become famous? A. One of the songs went viral on social media B. The band won a talent show C. They were featured in a documentary D. information not given

3. How is Unicorns different to the album’s other songs? A. It talks about coping with unpleasant situations B. Its lyrics discuss teen problems C. It is meant to make listeners feel happy D. It is based on a fictional character

4. A “catchy” song has lyrics that are … A. easy to remember B. difficult to write C. the only one of its kind D. neither interesting nor exciting

6. Which of Jamie’s childhood memories is in Unicorns’ lyrics? A. him watching a cartoon B. him having a snack C. him skipping school D. him writing his first song

7. Which cartoon series is mentioned in Unicorns? A. Digimon B. My Hero Academia C. Avatar: The Last Airbender D. Pokemon

8. If you are “reminiscing” about something, you talk about it … A. fondly B. disapprovingly C. mournfully D. unwillingly

9. What does “Bs” in the lyrics “bite the icing and leave the Bs rolling” most likely refer to? A. butterfingers B. beats C. biscuits D. bands

10. What was Hilda’s first song about? A. a family holiday B. a childhood pet C. a bad relationship D. a close relative

11. Which of the following could replace “devastated” in the sentence “I was devastated and wrote a song about him and what he had meant to the family”? A. troubled B. exhausted C. lost D. heartbroken

12. Who does Hilda believe will win the new season of New Voices? A. a nine-year-old singer B. a local rock band C. a pop duo D. information not given

13. According to Hilda, what has been one downside of winning New Voices? A. losing her privacy after becoming a public figure B. giving up on her dreams of becoming a DJ C. the pressure of having to write new songs D. no longer being able to perform for small audiences

14. What does Hilda enjoy most about performing live? A. the loud music B. the paparazzi C. interacting with fans D. all of the above

15. What does Hilda’s interview end with? A. an encouragement B. an invitation C. an argument D. an appeal

What is your favourite band or singer? Photo: Shutterstock

DJ Tsang: Hilda Moore is the lead singer for the indie band Two Streets which shot to fame after winning the TV talent show New Voices last year. The band’s first album “I can take it” is currently at the top of the charts. Today, Hilda is here with us at YP 852.8FM for her first-ever solo interview. Good morning, Hilda!

Hilda Moore: Good morning! Thanks for having me.

DJ Tsang: First, can you tell us what the album’s hit track, Unicorns, is about?

Hilda Moore: Many of the tracks on the album are about stressful situations that teens like myself have to cope with every day. Man-kit, Jamie, Kim and I – all of us put forward ideas when we were writing the lyrics, and a lot of these were based on some of the worst moments when we were growing up. That was when Man-kit came up with the idea of having one song filled with our best childhood moments. And that’s how Unicorns came about. It’s a happy, catchy song about finding joy from the past, contentment in the present and hope for the future.

DJ Tsang: Wow, that’s a great background story. What inspired the lyrics for this song?

Hilda Moore: Kim was re-watching a cartoon series after one of our jam sessions, when we realised all of us were obsessed with it when we were in primary school – and that’s the Pokemon reference in the lyrics. We started talking about our favourite Pokemon, and it turned into an entire night of reminiscing about our childhood and all the things we used to love. Also, Jamie used to have a whole pack of ice gem biscuits after school every day, and he would only eat the sweet topping. So the line about “bite the icing and leave the Bs rolling” came from this memory!

DJ Tsang: Aha, that makes a lot of sense! Since we’re on the topic of childhood, how old were you when you wrote your first song?

Hilda Moore: I was nine years old, and our family dog had just died. He was the same age I was, and we were inseparable. I was devastated, and wrote a song about him and what he had meant to the family. My mother cried buckets when I sang it.

DJ Tsang: I’m sorry to hear that. Losing a pet is never easy, but we’re glad that it inspired the emotional songwriter that you are now. Moving on to a cheerier subject, we want to know – will you be watching the new season of New Voices?

Hilda Moore: Of course! It’s the best show on TV. The whole band is watching. Three of us agree on who this year’s winner will be. Only Kim has a different opinion. Don’t ask me who I think will win though [laughs]!

DJ Tsang: Got it! Can you tell us about how life has changed for the band since Two Streets won the competition?

Hilda Moore: Losing our privacy and being hounded by the paparazzi for sure, and coming to terms that this is now the reality of our lives. But having this amazing opportunity to perform our music in front of thousands of people is worth it. We all love soaking in the atmosphere while we perform live, and for me, there’s just something special about singing along with our fans and hanging out with them after a concert. Speaking of which, we have an upcoming gig at Applause Livehouse Bar next Friday evening. We’ll be playing all the songs from our album. It’ll be great to see you there!

DJ Tsang: I will be there! All right, we’ve come to the end of the interview. Hilda, thanks very much!