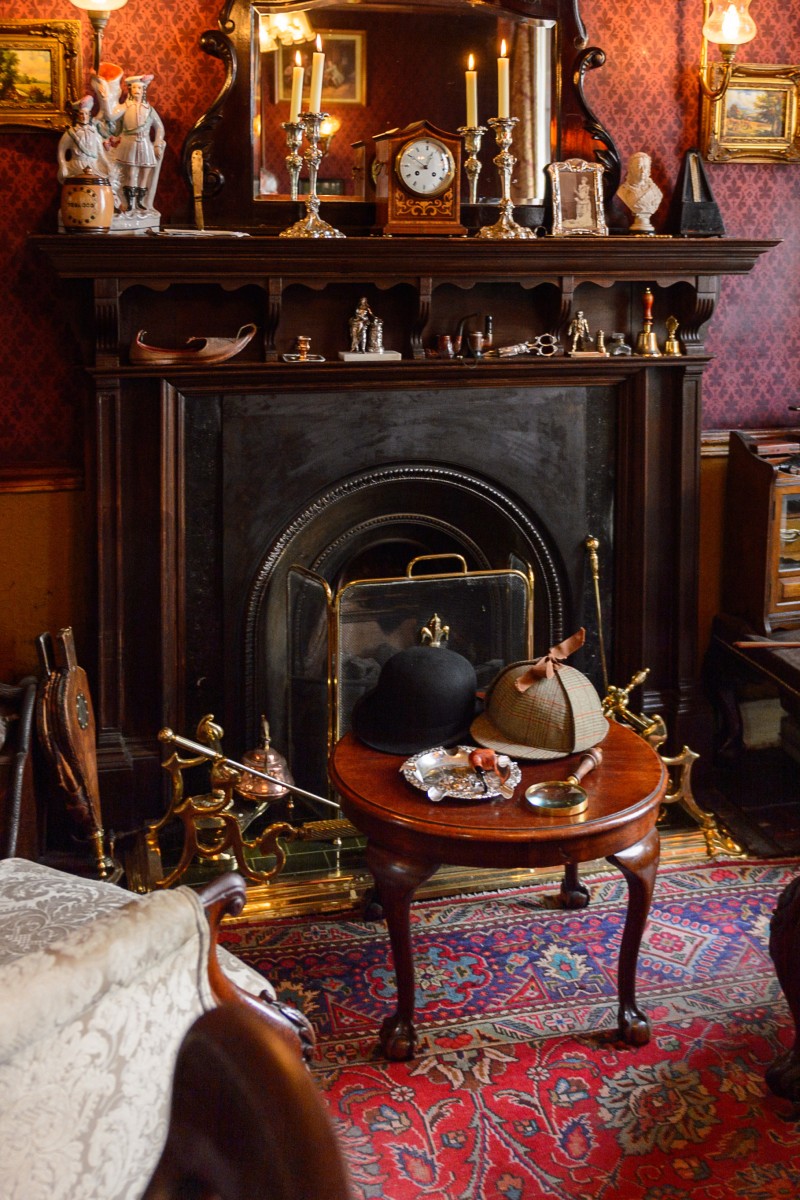 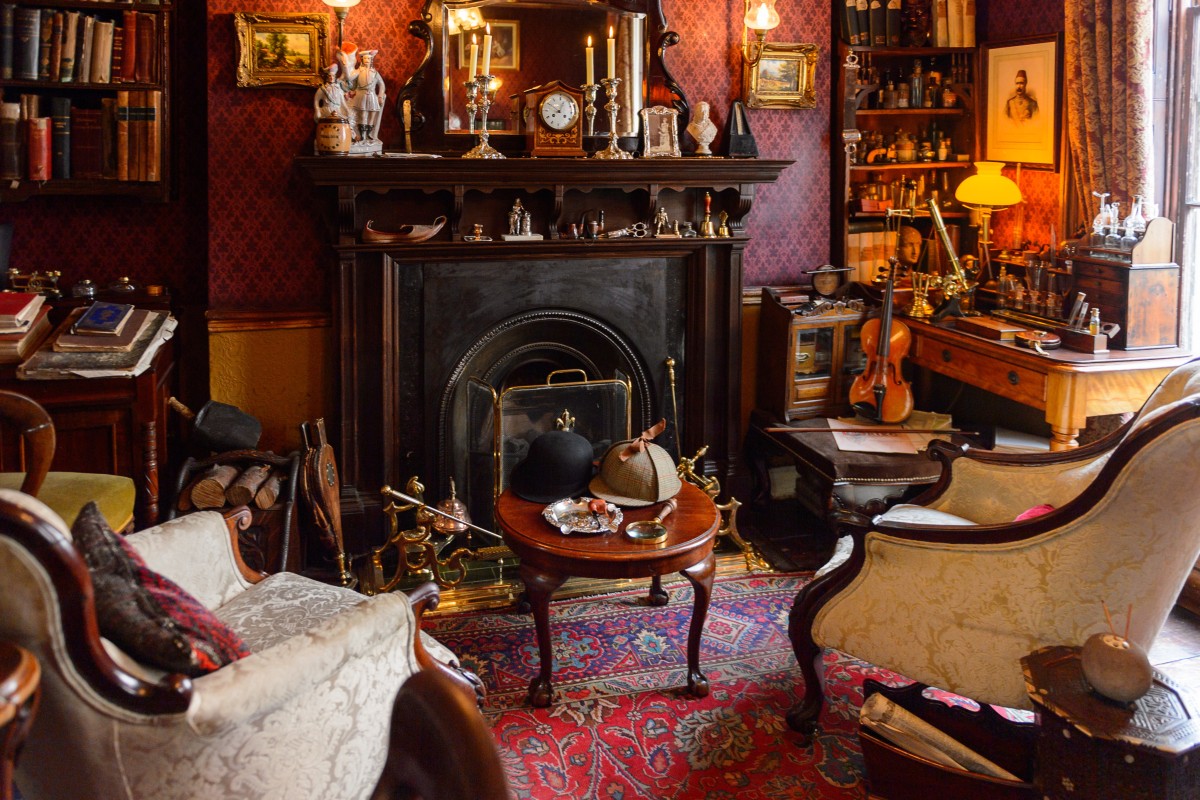 The main living room of the Sherlock Holmes Museum at 221B Baker Street in London. Photo: Anton_Ivanov / Shutterstock

1. What does a “narrator” do? A. solves crimes B. interviews famous people C. tells the story in a film or novel D. serves as a doctor for an army

2. According to the podcast, what role did Watson play in the criminal cases Holmes was working on? A. He helped to examine dead bodies. B. He interrogated suspects. C. He was a spy. D. information not given

3. Which word can replace “talent” in the podcast? A. flair B. gift C. knack D. all of the above

4. Where did Watson study to become a doctor? A. at Baker Street School of Medicine B. at London University C. at Queen’s College D. at the University of Calcutta

5. What organisation first employed Watson as a doctor? A. the British Army B. a local dental clinic C. a hospital in Afghanistan D. a hospital in London

6. Where was Watson reposted after India? A. the suburbs of London B. an army hospital in Europe C. an active war zone D. an undisclosed location

7. Which of the following statements is true? A. Watson never worked abroad. B. Watson had a long career in the British Army. C. Watson served in India for more than 10 years. D. Watson was a doctor in the army for only a short time.

9. What weapon caused Watson to injure his shoulder? A. slingshot B. gun C. blade D. grenade

11. What unexpected event happened to Watson while he was recovering? A. He needed a blood transfusion. B. His wound got infected. C. He suffered another injury. D. He caught a fever.

12. If someone is “confined” to a space, they are … A. unable to find their way B. keeping a secret C. not allowed to leave D. none of the above

13. Why did Watson eventually return to England? A. as a result of his ill health B. because he wanted to get married C. to open his own medical practice D. to start a private detective business with Holmes

14. How did Watson survive when he returned to London? A. He borrowed money from his father. B. He had some money from the army. C. He worked in a hotel. D. He got food and shelter from a local charity.

15. How did Watson meet Holmes? A. They both worked at the same hospital. B. Holmes had advertised for an assistant. C. Watson was looking for a new job. D. Holmes was looking for someone to share his flat.

Interviewer: Good morning, Dr Watson. Thank you for finding the time to talk to us.

Dr Watson: No problem. The pleasure is all mine.

Interviewer: First of all, could you give us a short personal introduction? There might be a few listeners who don’t know who you are.

Dr Watson: Of course. I am Doctor John Watson. Most people know me as the chronicler and narrator of the cases of Mr Sherlock Holmes, the greatest detective the world has ever known. For a while, I was Holmes’ flatmate at 221B Baker Street and accompanied him as he solved many criminal cases.

Interviewer: You were Holmes’ assistant?

Dr Watson: No, I would never call myself that. I don’t have the talent for the sort of detective work that Mr Holmes does.

Interviewer: Right. So, where did you train to be a doctor?

Dr Watson: In London. I got my degree in medicine in 1878 after studying at London University’s School of Medicine and Dentistry.

Interviewer: Where was your first job?

Dr Watson: After leaving university, I got a position as an assistant surgeon in the British army.

Interviewer: Did you serve abroad?

Dr Watson: Oh yes. As soon as I joined the army, I was sent to India, and my regiment was subsequently moved to the war zone in Afghanistan. But my career as an army doctor didn’t last long. I was wounded at the Battle of Maiwand in 1880. An enemy bullet hit me in the left shoulder, breaking the bone. I lost a lot of blood, but fortunately, I was dragged out of the battle and back to the army hospital.

Interviewer: That must have been awful!

Dr Watson: Indeed. For weeks, the doctors thought I would not live. I suffered terrible pain from the wound. As soon as I made a slight recovery, I was struck down by long attacks of fever and was once again confined to the hospital. When I did recover, I was very weak and of no further use to the army. The doctors decided to send me back to England. My career as an army doctor was finished, and my health was in ruins.

Interviewer: What happened when you got back to England?

Dr Watson: I had no relatives or close friends in London – I was completely alone. Fortunately, the army had given me a small pension for nine months, so I was not without money. I rented a room in a hotel in Central London, but knew I would soon have to find somewhere cheaper.

Interviewer: And was that how you ended up at 221B Baker Street?

Dr Watson: Well, almost. One evening, completely by chance, I bumped into one of the hospital workers from my student days. He told me he knew someone who was looking for a second person to share a flat on Baker Street. That someone was Sherlock Holmes. The two of us met, and the rest is, as they say, history.