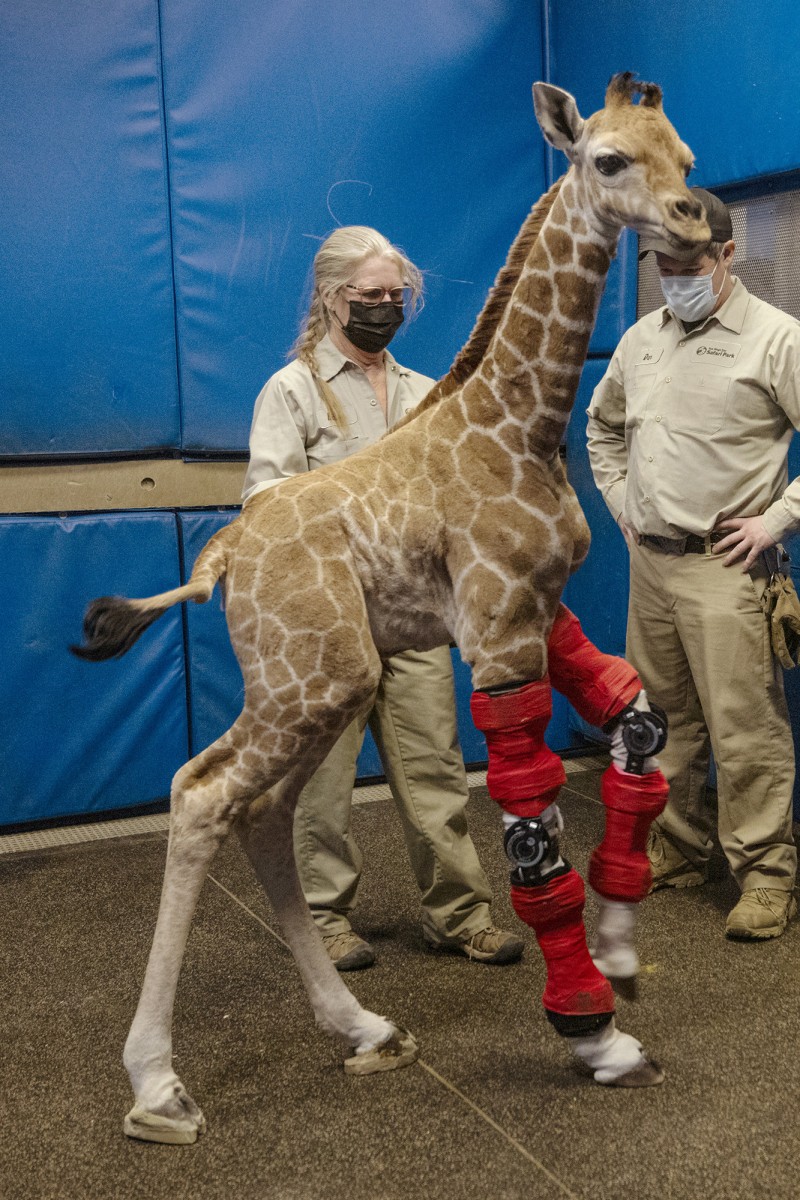 Msituni is a giraffe calf born with an unusual disorder that caused her legs to bend the wrong way. Photo: San Diego Zoo Wildlife Alliance via AP

Click on the video below for the audio (the script has been adapted from Tribune News Service).

3. What was wrong with one of Msituni’s legs? A. Part of her leg was badly swollen. B. Her knee was missing a bone. C. It was much shorter than the other three legs. D. It was not bent correctly at the joint.

4. Which word can replace “condition” in the podcast? A. case B. problem C. quality D. status

5. What did Msituni’s leg prevent her from doing? A. standing up properly B. moving around C. getting food D. all of the above

6. Based on your understanding of the podcast, what does the Hanger Clinic specialise in? A. training athletes with disabilities B. medical care and treatment of animals C. treatment for people who need help moving D. care for newborn animals

7. How often had Mirzaian worked with animals before he was asked to treat the baby giraffe? A. frequently B. occasionally C. rarely D. never

8. How did Mirzaian learn how to create a special set of braces for Msituni? A. He spoke to vets. B. He measured the giraffe calf. C. He learned more about giraffes online. D. He read about Msituni’s condition in his medical books.

9. How tall was Msituni when she got her leg brace? A. less than a metre tall B. between 1.5 and 2 metres C. taller than 3 metres D. information not given

10. What did Mirzaian do as soon as he saw the baby giraffe? A. He hugged her. B. He petted her on the head. C. He spoke to her. D. He cried in relief.

11. If someone is “moved” by something, they … A. change its position B. used to dislike it C. have no interest in it D. have strong feelings for it

12. What does the “procedure” in the podcast refer to? A. performing a surgery B. injecting a special liquid C. cutting off a body part D. none of the above

13. What pattern can be seen on the special brace? A. giraffe spots B. leopard prints C. zebra stripes D. human fingerprints

15. Which of the following is a suitable alternative headline for this story? A. Msituni the giraffe undergoes difficult surgery B. How a mother giraffe helped her calf to walk again C. Giraffe calf walks tall after receiving leg brace D. none of the above

Voice 1: All doctors occasionally come across patients that challenge their skills. But when Ara Mirzaian, who is an orthotist, encountered a baby giraffe in need of leg braces, it took the word “challenge” to a whole new level.

Voice 2: The young giraffe, named Msituni, was born at the San Diego Zoo Safari Park in the US state of California. She was born with an abnormality in one of her front legs and the joint bent the wrong way, making it impossible for her to stand and walk. Vets at the zoo feared she might not survive if they did not quickly correct her condition because it could prevent her from being able to walk around and get food.

Voice 1: They contacted the Hanger Clinic, where Dr Mirzaian has spent his career fitting braces and splints on countless people, including Paralympic athletes. Even though he had never had an animal patient, Dr Mirzaian decided to take up the challenge after learning about Msituni’s condition.

Voice 2: After reading up on giraffes on the internet, Mirzaian designed a special set of braces for the 1.78-metre-tall animal, which would help support and strengthen her legs and hopefully correct the problem. He then set about fitting the braces at the animal hospital.

Voice 1: Mirzaian shared that it was an amazing experience seeing the giraffe calf for the first time and that he was so moved by the animal’s grace and beauty that he hugged her. The procedure went smoothly, and Msituni responded well to her special braces, which were designed with a giraffe pattern to make them look more natural. In the end, Msituni only needed one special brace because the other leg corrected itself with a regular medical-grade brace.

Voice 2: Fortunately, after five weeks in hospital, Msituni’s leg issue was resolved, and the baby giraffe was able to return to the rest of her herd thanks to Mirzaian and his team.