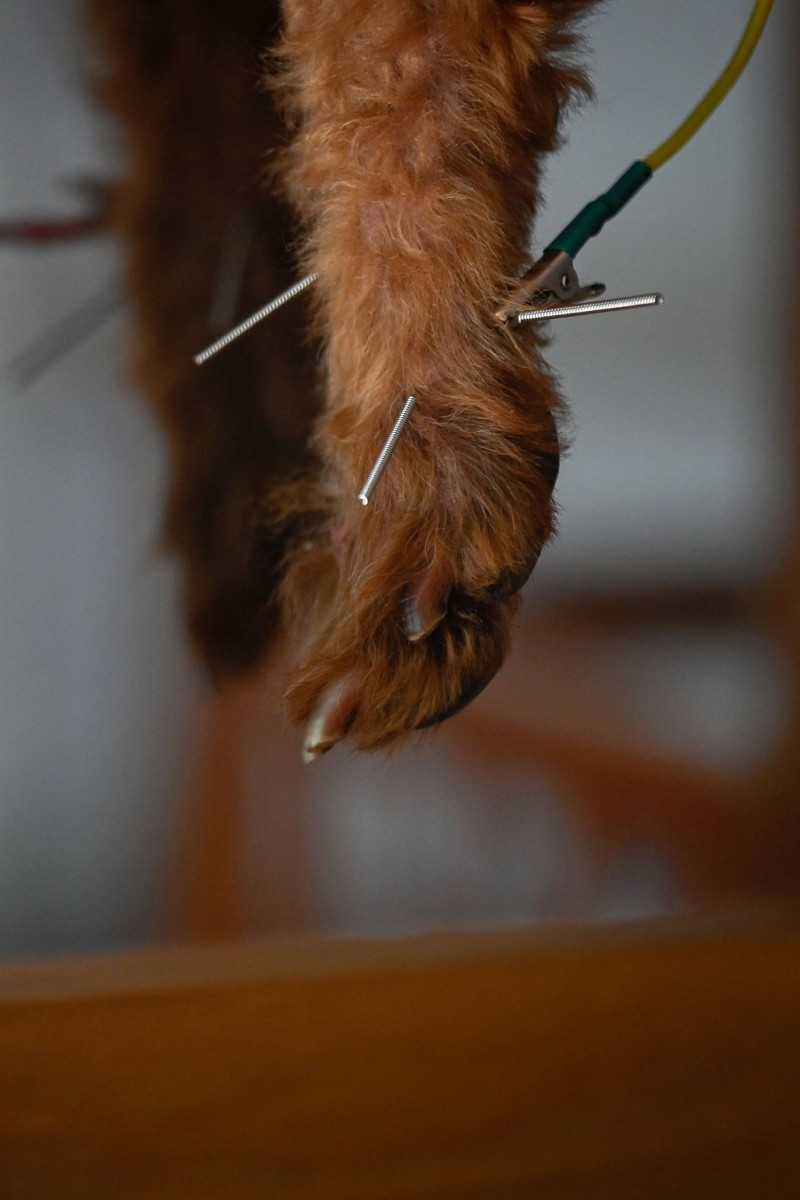 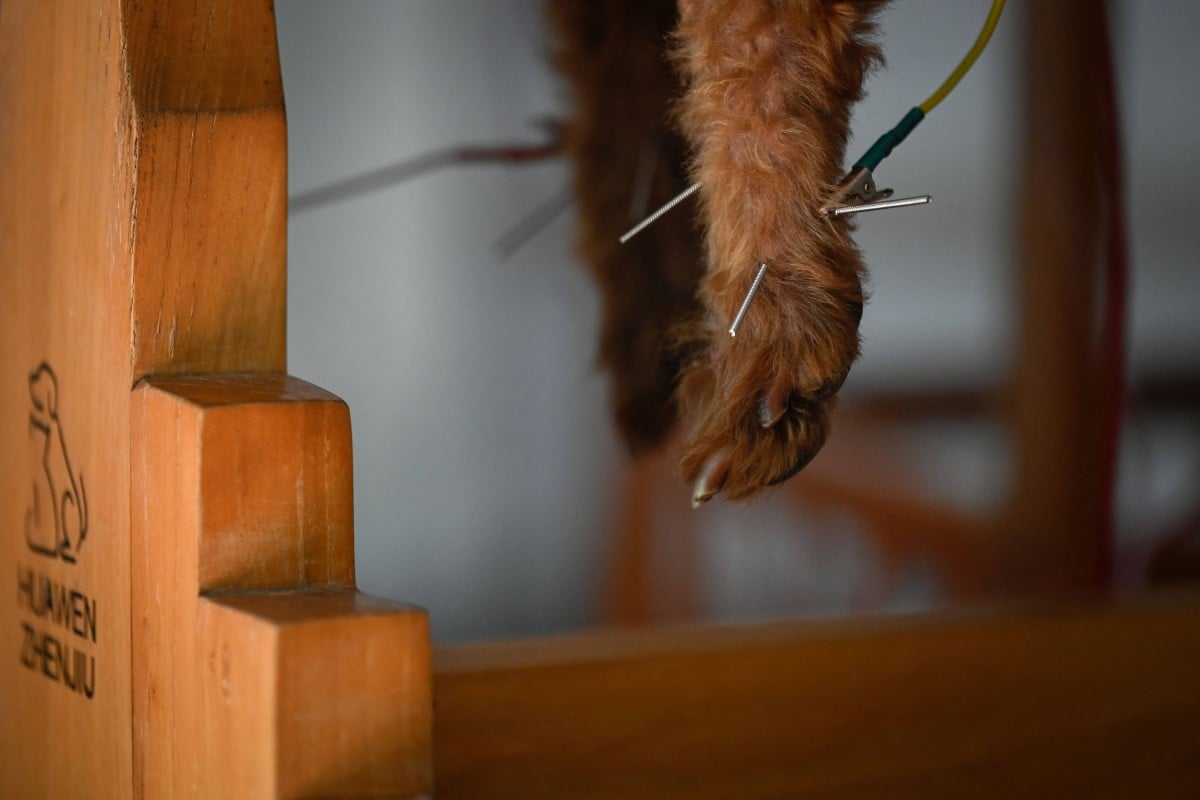 1. What does the phrase “strapped in tight” suggest about Duniu’s state?

A. He is unable to move. B. He cannot see clearly. C. He is not allowed to bark. D. He cannot hear very well.

2. Which parts of Duniu’s body are the needles inserted into?

A. his tail and nose B. his paws and back C. his ears and paws D. his nose and back

3. Which of the following best describes “acupuncture”?

A. It is a small hole made by inserting a sharp object into the body. B. It is a form of treatment that involves pushing special needles into parts of the body. C. It is a type of medical treatment that requires surgery, using tools that resemble needles. D. It is a way of treating disease specially designed for animals.

4. Which word can replace “invasive” in the beginning of the podcast?

A. dangerous B. meddlesome C. complicated D. none of the above

5. How does Duniu’s illness affect him based on your understanding of the podcast?

A. He has breathing issues. B. His appetite has decreased. C. He is in pain when he walks. D. His paws are swollen.

6. Why did Zhai decide not to let Duniu undergo surgery?

A. He believes acupuncture has fewer side effects compared to surgery. B. He did not want Duniu to experience the pain from surgery. C. His other poodle suffered from side effects after being operated on for the same illness. D. all of the above

7. How does Zhai know acupuncture is an effective form of treatment for Duniu?

A. The poodle has shown improvement and is able to walk. B. Duniu has stopped growling in pain. C. Duniu enjoys going for his acupuncture sessions. D. The vet told Zhai that Duniu no longer requires surgery.

8. How long have people in China been practising animal acupuncture?

A. since 2016 B. several decades C. hundreds of years D. information not given

9. What sort of patients does Li Wen usually treat?

A. children B. animals C. the elderly D. young adults

A. go well together B. are identical C. are next to one another D. belong to the same group

12. Which of the following best describes an “ailment”?

A. a small living thing that causes infectious illnesses B. a transmittable disease C. a disease that affects people over a very large area D. an illness that is not very serious

13. What does Li not do before starting treatment on a patient?

A. look at its tongue B. check its eyesight C. take an X-ray D. take its pulse

14. How does Li help his patients feel more relaxed?

A. by injecting them with a sedative B. by playing music and soothing sounds C. by giving them a treat D. by reassuring them

15. What is the trend of using acupuncture on animals according to Li?

A. It is on the rise. B. It is in decline. C. It has remained the same over the years. D. none of the above

Voice 1: Strapped in tight, Duniu the poodle nervously eyes the vet as he gently sticks fine needles into the dog’s back and paws, summoning the ancient art of acupuncture to treat the pet’s aches and pains.

Voice 2: Duniu is just one of a growing number of animals being signed up for traditional medicine in China – care their masters say is less invasive and comes with fewer side effects than conventional treatments.

Voice 1: In one Beijing practice, pets of all shapes and sizes come for treatment. Duniu is one such patient. The poodle suffers from Legg-Calve-Perthes disease, which affects the thigh bone and can lead to painful osteoarthritis. Before his acupuncture treatments began, Duniu was in so much pain that he could no longer put his paw on the ground.

Voice 2: Zhai Chunyu, Duniu’s owner, said he chose to let Duniu undergo acupuncture because he was not comfortable getting him an operation. A vet had advised him to have part of Duniu’s femur removed, but he did not want to go through with the surgery, as his other poodle – who had the same disease – suffered a lot from the procedure and its side effects. Thankfully, acupuncture proved to work for Duniu; the poodle was able to walk after five or six sessions and is even able to run a little now.

Voice 1: Animal acupuncture is centuries old in China, says veterinarian Li Wen, who founded his practice in 2016. However, Li stressed that traditional Chinese medicine is not intended to replace conventional medicine because both have their strengths and are complementary.

Voice 2: Li mainly deals with cases of paralysis, limb weakness and pain in pets, but acupuncture can also be used for ailments when no other treatment is available. Before starting treatment, the vet first checks the animal’s body, examines its eyesight and the colour of its tongue, takes its pulse, and asks its owner questions. He then plants his needles at acupuncture points specific to dogs and cats. The clinic plays recordings of soft bamboo flute music and birds chirping to help the animals relax.

Voice 1: While the animal acupuncture market remains limited for the moment, Li says that it has been gaining popularity, as more and more people are realising the benefits of this form of treatment.