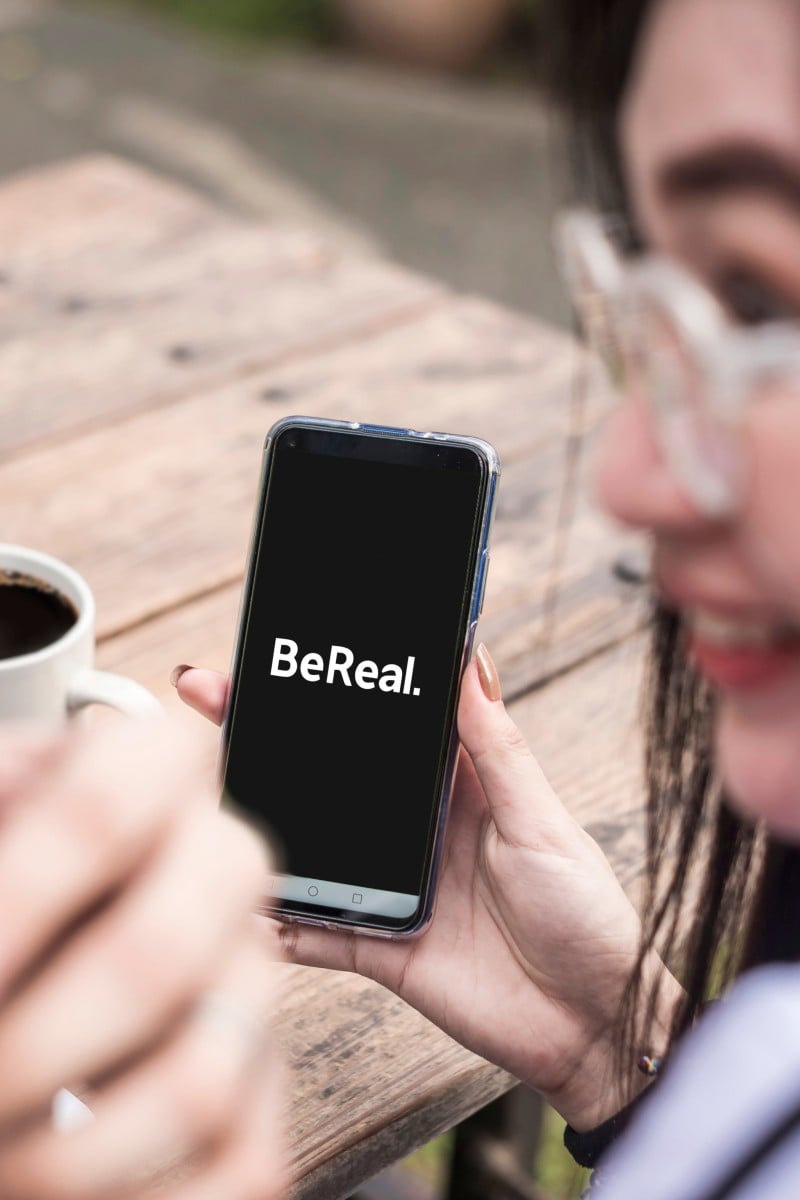 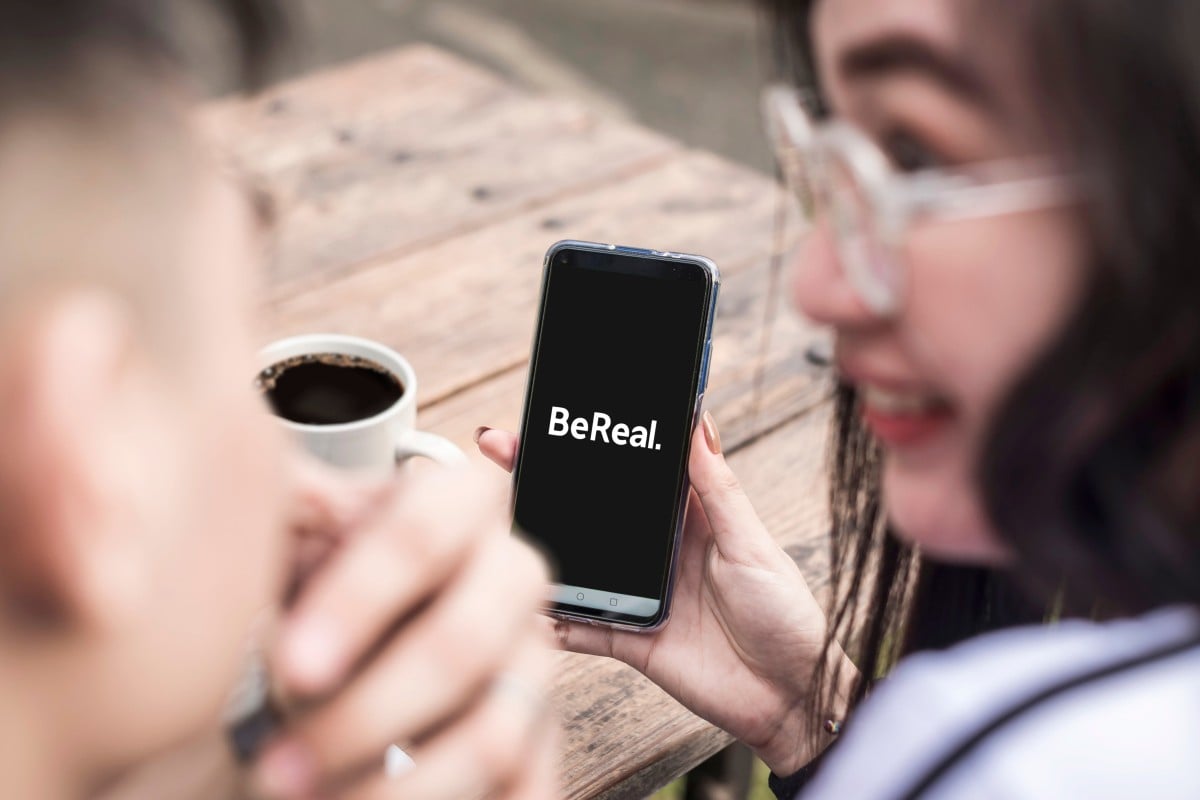 1. What is BeReal? A. a social networking app B. a type of camera C. a way of taking selfies D. a particular lifestyle

2. What are the two examples of “cherry-picked moments” mentioned at the beginning of the podcast? A. live streams and photos of influencers B. selfie apps and social networks C. short videos and advertisements D. photos of sunsets and selfies

3. If you take a “glimpse” of something, you ... A. look at it angrily B. stare at it for a long time C. see it for a very short period of time D. secretly look at it in admiration

4. How much time are users given to take and post their photos on BeReal? A. two seconds B. 20 seconds C. two minutes D. one hour

5. How does BeReal help put shared selfies into context? A. through using a phone’s front and back cameras B. through allowing users to tag their locations C. by disabling hashtags D. by reminding users to take photos once a day

6. Based on your understanding of the podcast, why doesn’t BeReal use special effects or touch up photos? A. because it takes up too much phone memory B. so that the photos are authentic C. because the photos look better when they are taken indoors D. all of the above

7. What is a word that can replace “contrast” as used in this phrase from the podcast: “a sharp contrast to the carefully cultivated images common on Instagram”? A. comparison B. diversity C. incompatibility D. disagreement

8. According to the podcast, what sort of images are usually posted on Instagram and Facebook? A. photos of holidays B. photos of celebrations C. photos of elaborate food D. all of the above

9. How many times has BeReal been downloaded in France alone according to the podcast? A. 50,000 B. 5 million C. 35 million D. information not given

10. Which group of people is BeReal most popular with? A. children under the age of 14 B. those born between the late 1990s and the early 2010s C. middle-aged working adults D. the elderly

11. If something is “flattering”, it makes someone look ... A. less elegant B. more imposing C. more attractive D. less refined

12. Why was one user slightly annoyed with BeReal? A. because her friend ended a phone call to take a selfie B. because she did not have enough time to pose for a photo C. because she found the BeReal alert annoying D. because she was unable to add special effects to her selfie

13. What does BeReal seek to capture according to Jennifer Stromer-Galley? A. how we perceive the world B. our day-to-day life as it happens C. special events and moments D. the best version of ourselves

14. What prompted Alexis Barreyat to create BeReal? A. after struggling to take the perfect photo while he was at a bike event B. after realising how hard influencers work C. after trying out different sorts of filters D. after seeing how people were so obsessed with social media that they did not enjoy the moment

15. What does the phrase “it remains to be seen” at the end of the podcast suggest about BeReal’s future? A. People are concerned about their safety and privacy while using the app. B. BeReal’s creator may have plans to include other functions in the app. C. BeReal’s ability to be successful in the long run is not yet certain. D. all of the above

Voice 1: It’s not all sunsets and selfie smiles – people are flocking to a new social networking app that calls on users to share true glimpses of their lives rather than cherry-picked moments. Once a day, BeReal simultaneously prompts users to take and post photos of what they are doing and gives them two minutes to do so.

Voice 2: The app uses front and rear-facing cameras on phones, putting shared selfies into context. The app shuns software filters that add glossy special effects or touch up your blemishes. The approach is a sharp contrast to the carefully cultivated images common on Instagram and Facebook that often focus on parties, holidays, fancy food and perfect weather.

Voice 1: Launched two years ago by French entrepreneurs, BeReal has seen its popularity surge in recent months. BeReal has been downloaded nearly 35 million times worldwide and is proving popular with Gen Z. It was the most downloaded app in the United States in August 2022, and ranked among the top three in Britain and France.

Voice 2: One BeReal user posted a playful video of her scrambling about her home in a frenzy to stage a flattering photo with just two minutes to get ready. Another lamented on Twitter about a friend abruptly ending a phone call to take a selfie after getting a BeReal alert.

Voice 1: According to Jennifer Stromer-Galley, a professor at Syracuse University School of Information Studies in the United States, the idea of BeReal is being in the moment of where one is at and what they are doing. It is about our authentic lives – be it walking the dog or in the pyjamas eating cereal – rather than our best lives.

Voice 2: BeReal creator Alexis Barreyat was at a mountain bike event when it struck him how social media users focused more on perfecting content than what was happening around them. He was surprised to see so many influencers busy staging their life with multiple shots and stories, or trying out dozens of filters while completely missing the show. It was even making some of them and their audiences miserable.

Voice 1: While BeReal’s rise in popularity signals that people are getting tired of polished online images that don’t reflect actual life, it remains to be seen whether the app’s popularity will endure.