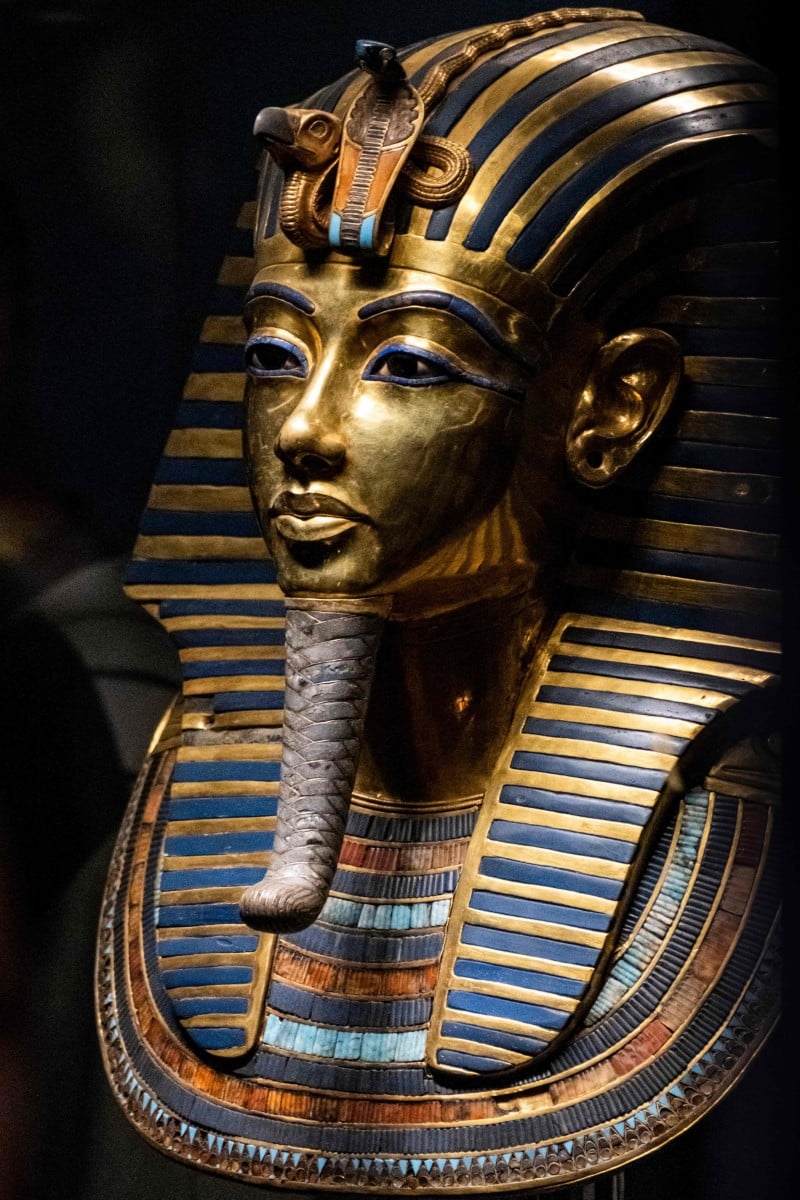 5-minute listening: 5 things to know about Egypt’s King Tutankhamun and his treasure 4. How many rooms were there in Tutankhamun’s tomb? A. three B. five C. eight D. nine

5. Which word can replace “pillaged” in the podcast? A. trespassed B. confiscated C. looted D. invaded

6. Why was the discovery of artefacts within Tutankhamun’s tomb unusual? A. because experts believed the artefacts were destroyed during a war B. because many of the other tombs had been raided C. because most of the deceased were buried without any objects in ancient Egypt D. all of the above

7. What material is Tutankhamun’s chariot made of? A. iron B. silver C. gold D. information not given

9. Which of the following artefacts has become synonymous with Tutankhamun? A. his funeral mask B. his coffin C. his chariot D. his dagger

10. What was Tutankhamun’s father known as when he was alive? A. leader of Egypt B. husband of Queen Nefertiti C. father of young Tutankhamun D. all of the above

11. What was Queen Nefertiti famous for according to the podcast? A. her attractive looks B. her generosity C. her lavish lifestyle D. her intelligence

13. What exactly caused Tutankhamun’s death? A. a chronic illness B. a freak accident C. an assassination D. no one knows

14. According to the podcast, what is one popular belief some people have regarding Lord Carnarvon’s death? A. He died of lead poisoning. B. He had an incurable disease. C. Tutankhamun’s tomb was cursed. D. Howard Carter murdered him.

15. What is Agatha Christie’s “The Adventure of the Egyptian Tomb” about? A. how Howard Carter uncovered Tutankhamun’s tomb B. a curse associated with the tomb of an Egyptian pharaoh C. ancient Egyptians’ belief in the afterlife D. a biography of Tutankhamun’s life

Voice 1: It’s one of the 20th century’s most iconic photos: British archaeologist Howard Carter inspecting the sarcophagus of Tutankhamun. The resting place of Egypt’s pharaoh Tutankhamun has become the world’s most famous tomb, and its discovery is among the greatest archaeological finds of all time.

Voice 2: As this month marks the 100th anniversary of Carter’s earth-shattering discovery, here are five key facts about the boy-king, his treasure-filled chamber and its abundant, mysterious riches.

Voice 1: After nine years on the throne, Tutankhamun died aged 19 around 1324 BC. His tomb was discovered by British archaeologist Howard Carter and his Egyptian digging team in the Valley of the Kings near the city of Luxor in November 1922. The more than 4,500 objects laid out across five rooms included thrones, statues, jewels, furniture and weapons. It is Egypt’s only mausoleum found so far with its burial artefacts intact. Many other resting places of pharaohs and dignitaries had been pillaged by tomb robbers throughout the centuries.

Voice 2: Among the discovered artefacts were a chariot, a gilded bed featuring posts made of carved lion heads, and a gold-handled dagger that experts say was forged from the iron of meteorites. The walls of the chamber in which Tutankhamun was laid to rest were covered in gold; his coffin is a three-piece sarcophagus. The coffin’s innermost 110 kilograms is made of solid gold. His funeral mask, now one of the most instantly recognisable Egyptian artefacts, is made of gold inlaid with lapis lazuli and with eyes of obsidian and quartz.

Voice 1: Tests have established that Tutankhamun’s father was the pharaoh Akhenaten, who ruled from the 1330s to 1350s BC. Akhenaten was the husband of the legendary beauty Queen Nefertiti. It was at the age of nine, towards 1333 BC, that Tutankhamun is believed to have acceded to the throne, although his exact age and dates vary from one expert to another.

Voice 2: Tutankhamun’s reign coincided with a troubled time in Egyptian history known as the Amarna period. Tutankhamun is believed to have married his half-sister Ankhesenpaaten, with marriage between brother and sister common in pharaonic Egypt. The death of Tutankhamun, which ended the 18th dynasty under the period of Egyptian history known as the New Kingdom, has been a mystery. His death has been blamed variously on a chariot accident, illness or murder.

Voice 1: Several months after the 1922 discovery, Britain’s Lord Carnarvon, who financed the research, was diagnosed with infections and died. His demise fuelled speculation that the fabled “curse of the pharaohs” had struck one of those responsible for violating the tomb of “King Tut”. The queen of British crime novels, Agatha Christie, based one of her short stories, “The Adventure of the Egyptian Tomb”, on King Tut’s “curse”.