2 hours ago
English exercisesShow Off 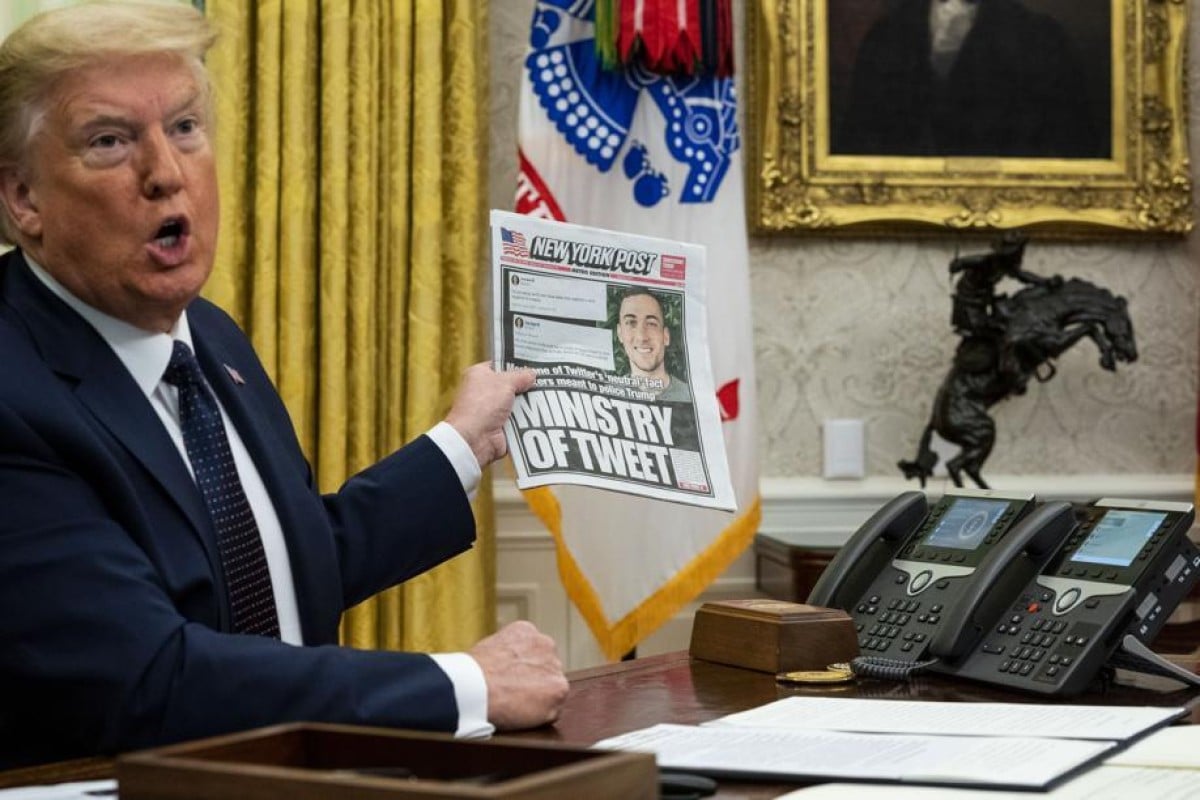 US President Donald Trump has threatened executive action against Twitter after it fact-checked some of his tweets. Photo: Bloomberg

President Donald Trump and Twitter tangled over the truth this past week as the social media giant flagged the president’s tweets for spreading false information and potentially inciting violence, the first instance of the platform fact-checking the president.

The episode left Trump fuming and threatening reprisals against the platform he uses constantly to hint at or lay out policy, talk up his record, sound off on critics and spread conspiracy theories and misinformation.

On and off social media, Trump stretched or disregarded the facts as he tried to make the best of a US death toll surpassing 100,000 from the coronavirus, and made wild claims about mail-in voting.

Here’s a look back:

THE FACTS: This opinion comes from his ego, not science, and evades the fact that the US has experienced far more known sickness and death from Covid-19 than any other country. Well-documented failures in US testing and gaps in containment in the crucial early weeks contributed to the severity of the crisis.

How to wear your face mask correctly

Early in the US outbreak, the Centers for Disease Control and Prevention said the death toll could have reached or exceeded 2 million if no steps had been taken to contain the disease. That is to say, if public health authorities, governors, mayors, the president and the public did nothing.

A do-nothing course was never an option and federal officials never forecast such an outlier death toll. Trump’s tweets overlook the fact that the US response — its weaknesses and strengths — was never all about him.

The protests sweeping across the US right now were sparked by the death of African-American George Floyd at the hands of a white police officer in Minneapolis, Minnesota. Photo: AFP

The protests in Minneapolis

TRUMP: “I can’t stand back & watch this happen to a great American City, Minneapolis. A total lack of leadership. Either the very weak Radical Left Mayor, Jacob Frey, get his act together and bring the City under control, or I will send in the National Guard & get the job done right. ... Just spoke to Governor Tim Walz and told him that the Military is with him all the way. Any difficulty and we will assume control but, when the looting starts, the shooting starts.“ — tweets Friday.

THE FACTS: His vow to send in the National Guard lacks vital context, though that’s not the larger issue here.

Minnesota’s governor already had activated the state’s National Guard in response to the chaos. Trump was unclear on whether he intended to have the federal government send National Guard personnel in other states for the purpose of law enforcement in Minnesota.

US law prohibits federal use of the National Guard or active-duty troops for domestic law enforcement. That prohibition can be overidden only in extreme circumstances. The Pentagon on Friday took the rare step of ordering the Army to put several active-duty U.S. military police units on the ready to deploy to Minneapolis if called.

A short explanation of the protests in the US

The larger issue was Trump’s comment that “when the looting starts, the shooting starts.“ That phrase from the violent front lines of the civil rights era evokes a brutal, hair-trigger police response and could be taken to mean Trump was threatening to have looters shot. Trump said later that is not what he meant and that he was not familiar with the origins of the phrase.

Trump said later he did not mean his comment as a threat but as an observation that looting tends to lead to people being shot. “I don’t want this to happen,” he tweeted.

The protests were sparked by the death of George Floyd, a handcuffed black man who pleaded for air as a white police officer kneeled on his neck.

TRUMP: “So ridiculous to see Twitter trying to make the case that Mail-In Ballots are not subject to FRAUD. How stupid, there are examples, & cases, all over the place. Our election process will become badly tainted & a laughingstock all over the World.” — tweet Thursday.

TRUMP: “There is NO WAY (ZERO!) that Mail-In Ballots will be anything less than substantially fraudulent. Mail boxes will be robbed, ballots will be forged & even illegally printed out & fraudulently signed.” — tweet Tuesday.

THE FACTS: No, there aren’t examples and cases “all over the place.” Voting fraud is rare.

How to spot a fake news story

Trump appointed a commission after the 2016 election to get to the bottom of his persistent theory that voting fraud is rampant. The panel disbanded without producing any findings.

Some election studies have reported a higher incidence of mail-in voting fraud compared with in-person voting, but the overall risk is very, very small. The Brennan Center for Justice said in 2017 the risk of voting fraud is 0.00004 per cent to 0.0009 per cent.

“Trump is simply wrong about mail-in balloting raising a ‘tremendous’ potential for fraud,” Richard L. Hasen, an elections expert at the University of California, Irvine School of Law, recently wrote in an op-ed. “While certain pockets of the country have seen their share of absentee-ballot scandals, problems are extremely rare in the five states that rely primarily on vote-by-mail, including the heavily Republican state of Utah.”

Trump himself voted by mail in the Florida Republican primary in March.