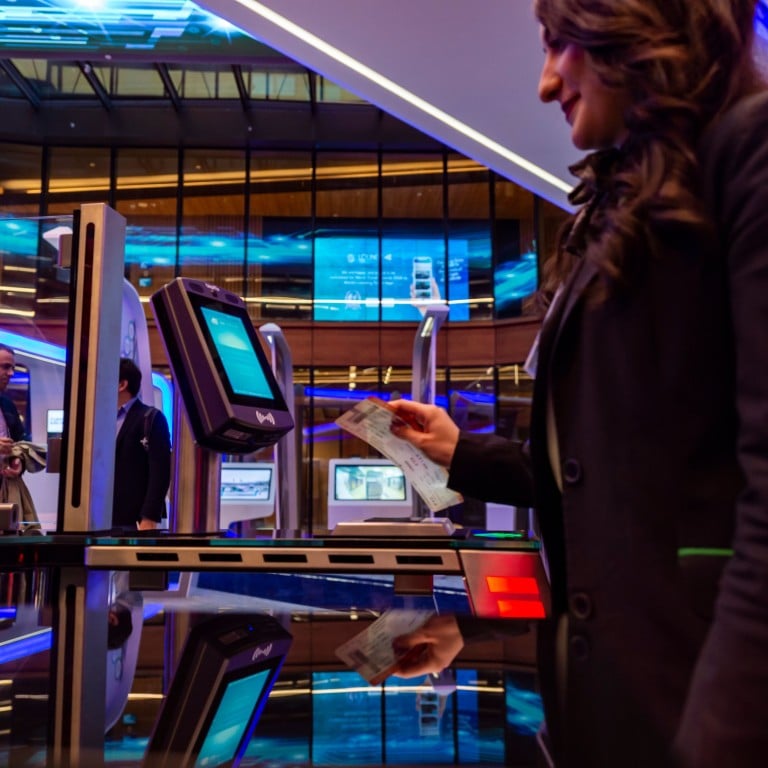 An attendant doing a facial recognition test using biometric technology at Istanbul Airport, which is also one of only a few airports currently to have its own 5G indoor network. Photo: AFP via Getty Images
Lifestyle /  Travel & Leisure

What smart airports of the future will be like: air taxis, 5G, sensor corridors for fuss-free security and much more An attendant doing a facial recognition test using biometric technology at Istanbul Airport, which is also one of only a few airports currently to have its own 5G indoor network. Photo: AFP via Getty Images

Despite “flygskam” – flight shame – and climate crisis concerns, air travel is only set to grow, with a predicted doubling of the worldwide number of passengers flying by 2040.

China is anticipated to become the world’s largest aviation market within the next 10 years. “By 2030, China will be the biggest passenger market in the world, and its domestic travel will represent the largest traffic flow,” says Benoit Verbaere, business development director at SITA, a provider of IT and telecoms services for the air transport industry.

To meet this growing demand, China has plans for
major airport expansion
. The Civil Aviation Administration of China has set a goal of having 450 commercial airports by 2035, almost double the number at the end of 2018.

However, airport expansion alone may not be enough.

Air taxis to help passengers get to and from airports more quickly could emerge by 2030. Photo: SITA
Technology-inspired efficiency will also play a large role. SITA predicts that we are headed for an era where e-gates and facial recognition will evolve into “smart” airports that use
biometrics and artificial intelligence
to allow the infrastructure to “think” for itself. There may even be “flying taxis” to take us to and from airports.
READ FULL ARTICLE

“With continuing growth in aircraft movements and passenger travel across Asia, airports are potential bottlenecks,” Verbaere says. “Failure to optimise and increase airport capacity is a common cause of blockages or delays.”

The 5G airport is actually already here, at least in a limited sense. Guangzhou Baiyun International Airport became China’s first commercial airport with 5G network coverage in January last year; tests showed it offered download speeds as high as 1.14 gigabytes per second, which is around 50 times the speed of a 4G network. Istanbul Airport in Turkey also has its own 5G indoor network.

“At this stage, the focus is on enabling more bandwidth,” Verbaere says, adding that from the perspective of airport operations, 5G will facilitate massive data exchanges that will make airports work faster and more intelligently.

By linking sensors on everything from planes and buses to stairs and luggage, 5G will allow airports to become more autonomous. Photo: SITA

Despite the focus on future-gazing technology, many passengers only want basic Wi-fi and streaming services on board aircraft – yet airlines have been reticent to install the tech to provide them.

“At present only eight providers, including Air China and Hong Kong Airlines, offer free Wi-fi services worldwide,” says Adam Ewart, CEO of luggage shipping company Send My Bag. “While this number will increase in the next few years, it will be followed by the introduction of a paid-for premium Wi-fi access with faster download speeds and more data usage.”

The London School of Economics predicts the market for Wi-fi in aircraft will be worth US$130 billion by 2035, and will contribute an extra US$30 billion to airline revenue.

“I expect basic Wi-fi to be offered as standard on most airlines within the next five years and on all airlines within 10 years,” Ewart says. “It’s a proposition too good for airlines to miss.”

Artist impression of passengers at a modern airport. Photo: SITA

From automated checkpoints to sensor corridors, going through security will soon be a fuss-free and paperless experience.

Airports with 5G, AI and biometrics

Beijing’s new Daxing International Airport (PKX) is an example of a hyper-connected airport designed for increasing numbers of tech-savvy passengers. AI will be used to simulate scenarios, predict and prepare.

Everything will be tracked

From bags and cargo to people and pets, soon everything in airports will be tracked and constantly mapped, mostly using superfast 5G mobile networks. 5G-connected sensors will track everything from planes and buses to barge trucks and stairs ready for the arrival of a plane. It will be harder to lose your luggage, and it will also assist remote bag drop-off at places like train stations and hotels.

Airports will become giant flying park-and-ride centres, with multiple options for transport. Expect air taxis to emerge by 2030 to provide much more efficient transport to and from the airport. Uber and others are already working on air taxis.