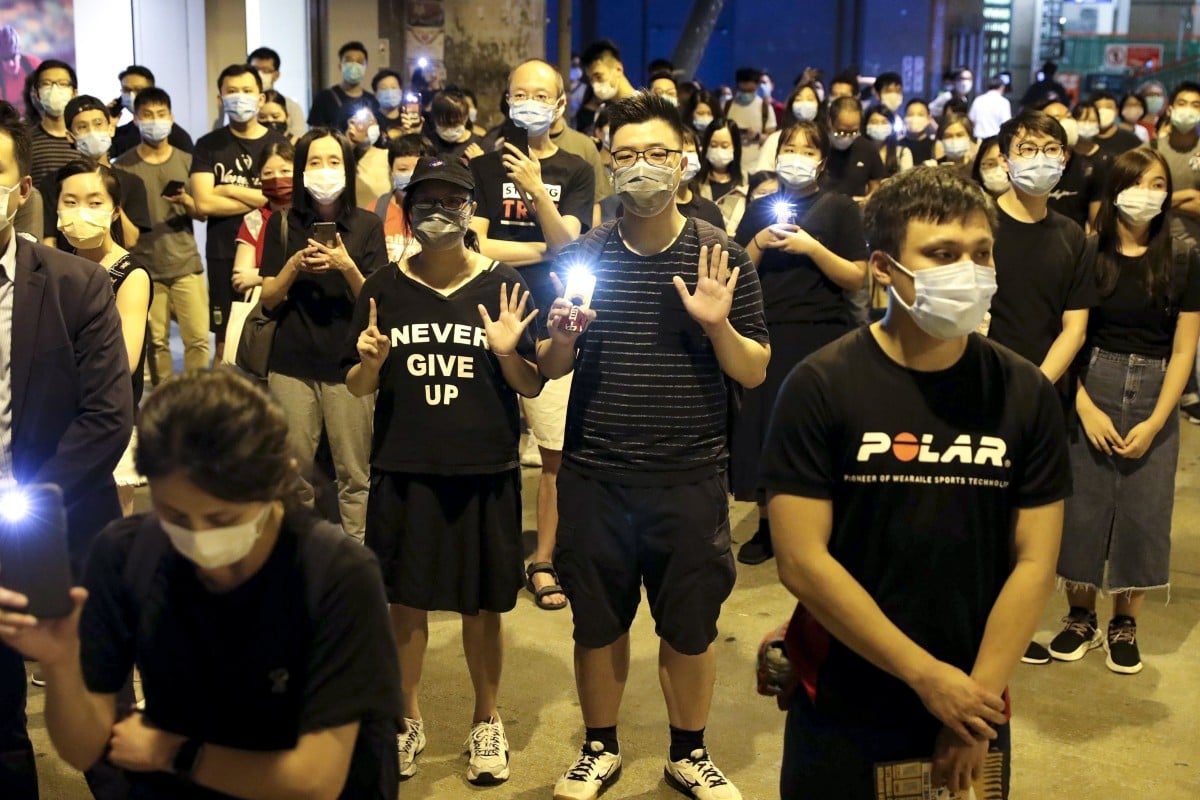 Popular protests slogans, especially ones that call for Hong Kong's independence, are now illegal under the national security law. Photo: SCMP/Edmond So

Netizens have started inventing creative, alternative slogans and coded messages after the government banned the phrase “Liberate Hong Kong, revolution of our times” on Thursday night. Under the new national security law, the phrase is not allowed, and displaying banners with the slogan can lead to immediate arrest.

One of the newly suggested slogans seen on popular local forum LIHKG was “Withdraw the national security law, Hong Kong here we go again”. “Hong Kong here we go again” is the literal translation of the Chinese name for “Hong Kong Coalition”, a pro-establishment alliance led by former city leaders, including the ex-chief executive Leung Chun-ying, to “defend the rule of law, bring society together and revive the economy”. The last words of both clauses happen to share the same pronunciation as well.

Netizens have also begun speaking in secret numeric codes on Instagram. “5640, 8179” now suggests another popular protest slogan, “Five demands, not one less”, as they share similar pronunciations in Cantonese. The sound of “0620, 1966” resembles that of “One nation, one Hong Kong”, a slogan which has recently gained popularity as more Hong Kong protesters call for independence. Yet, all these can only be deemed as speculations, as no one has officially, nor explicitly, explained the meanings behind these numbers.

A user on LIHKG also came up with the slogan “Hong Kong handstand, the only exercise”. “Handstand” shares a similar pronunciation with “independence”, so does “exercise” with “way out”. Another graphic shared widely on Telegram and LIHKG was a picture with a black background and white shapes that vaguely take after the Chinese characters of “Liberate Hong Kong, revolution of our times”.

All this creativity came following a statement released by the government saying, “the slogan ‘Liberate Hong Kong, the revolution of our times’ nowadays connotes ‘Hong Kong independence’, or separating the Hong Kong Special Administrative Region (HKSAR) from the People's Republic of China, altering the legal status of the HKSAR, or subverting the State power.”

The government spokesman also expressed strong condemnations of any acts which challenge the sovereignty, unification and territorial integrity of the People's Republic of China.

At a protest held on July 1, the police made about 370 arrests, including 10 for breaching the national security law.

According to police, three women were also arrested later in the day for displaying materials with Hong Kong independence slogans, violating the national security law. In the photos provided by the police, two of the said materials read, “conscience” and a Bible verse from the book of Amos, “But let judgment roll down as waters, and righteousness as a mighty stream.”

“Liberate Hong Kong, revolution of our times” was crafted by the former spokesperson of localist group Hong Kong Indigenous, Edward Leung Tin-kei, back in 2016. Its origin is also connected to the history of the early Republic of China, according to researcher Joachim Boittout in his analysis of the slogan for Hong Kong Free Press.