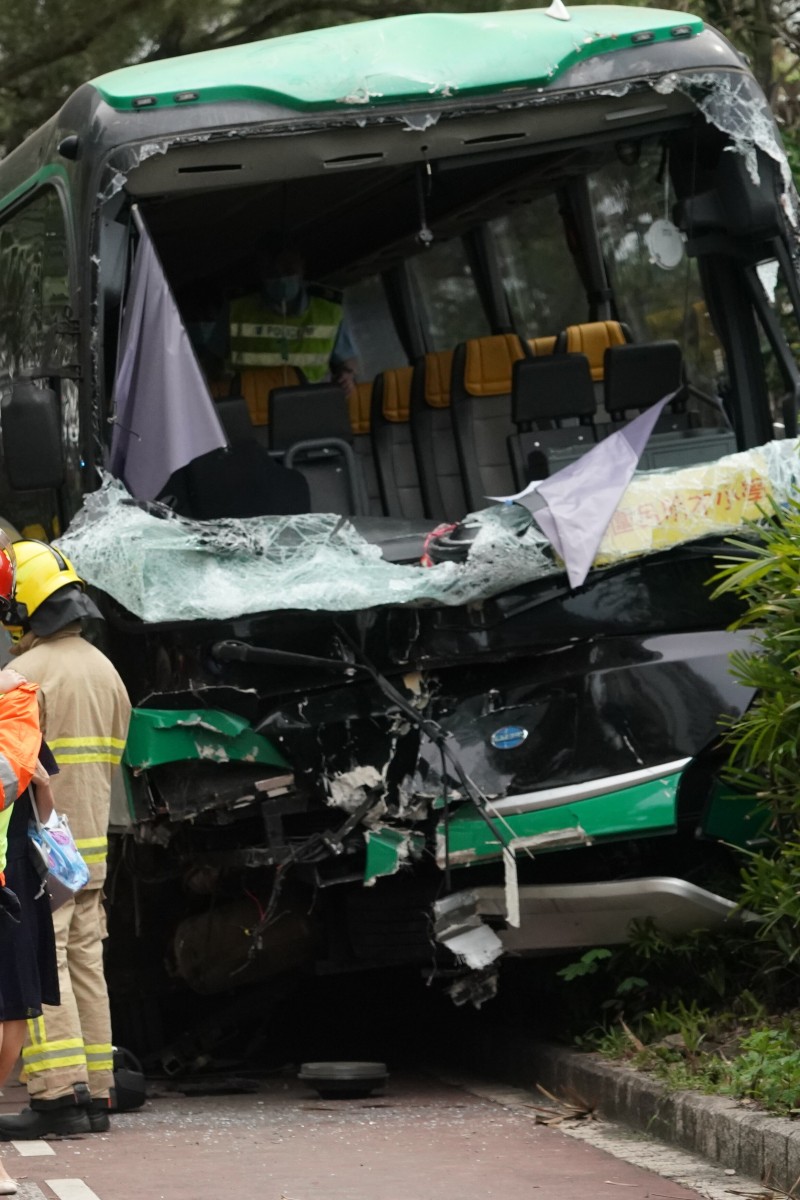 Twenty-two children were injured on Friday after a school bus collided with a private car in Sha Tin. Photo: SCMP/Felix Wong

Twenty-four people, including 22 children, were injured at midday on Friday after a school bus crashed into two other vehicles in Sha Tin before stopping by the side of a river.

Online dashcam footage shows a green and white coach appear to suddenly veer out of control and crash into a white car at high speed. Police said the coach had also hit a van before stopping.

The vehicle, which was carrying 55 primary school students and a nanny, then crossed into a bicycle lane by the river.

Why we need to focus on road safety

Dozens of children, who attend Baptist (Sha Tin Wai) Lui Ming Choi Primary School, were seen sitting by the side of the road after the incident.

A Primary Two schoolboy, who identified himself as Vrayden, told reporters at the scene he was terrified by the crash.

“There was a loud sound – bang! Then the coach fell. I flipped over. My tummy now hurts. I sat in the 10th row,” he said, adding that he immediately called his mother. “There were many people on the coach and they were scared. I cried too. It is my first time [being in such an accident].”

The children suffered minor injuries, and the bus driver will be arrested for dangerous driving. Photo: SCMP/Felix Wong

Police said an initial investigation suggested the coach driver, who suffered a fractured pelvis, might have missed a road sign while headed to Ma On Shan, resulting in the accident.

Officers said the driver, who was undergoing surgery, would be arrested on suspicion of dangerous driving.

“Cars are only allowed to turn right in that lane, but the coach reportedly missed the sign and headed straight,” Superintendent Lam Chuen said.

The 22 children and the nanny suffered minor injuries, and were sent to Prince of Wales Hospital in Sha Tin, Alice Ho Miu Ling Nethersole Hospital in Tai Po, and Kwong Wah Hospital in Yau Ma Tei for treatment.

“It is lucky that the injuries of the children were minor because they were wearing seat belts,” Lam said, adding officers would look into the driver’s health, driving attitude and the maintenance of the coach.

All lanes of Tai Chung Kiu Road heading towards Ma On Shan, between Siu Lek Yuen Road and Fo Tan Road, were closed because of the accident.