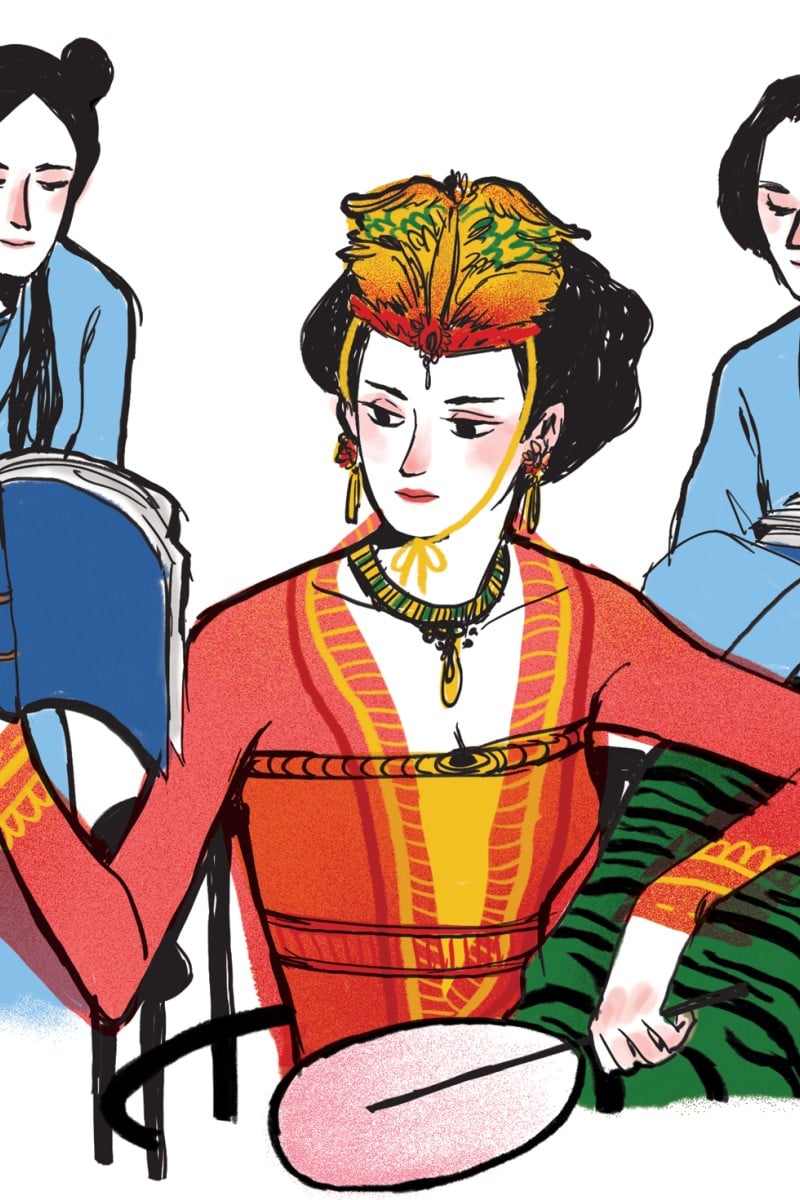 Wu Zetian (624-705AD) was China's only female Emperor. She was a brutal, but capable reformer Wu Zhao - noble, beautiful and well-educated - became the concubine of the elderly Emperor Taizong at the age of 14. She soon attracted the attention of the Emperor's heir, Li Zhi, who made her his own concubine when he succeeded to the throne shortly afterwards.

Within three years she gave birth to two sons, then a daughter who soon died. Wu accused the Empress Wang of strangling the child (whom she had reputedly murdered herself), and persuaded the Emperor to remove Wang from her position and appoint her as Empress instead. She then - allegedly - had her rival's hands and feet amputated, and her body thrown into a vat of wine to drown. This strengthened her power in the palace.

One year later, Wang's son was removed as heir and replaced by Wu's son Li Hong. Shortly afterwards, the Emperor fell mysteriously ill - some said by Wu's hand. As the Emperor's health worsened, Wu took over the reigns of power, and by 666AD was acting as her husband's equal, even sitting in audience with him, admittedly from behind a screen in the room.

To challenge Confucian beliefs that "having a woman rule [is] as unnatural as having a hen crow like a rooster", Wu began a campaign to elevate the status of women, recruiting scholars to write biographies of famous women, and giving members of her mother's clan high political posts.

As the years passed, Wu steadily eliminated her opponents, by exile at best and grisly death at worst.

It seemed that no one was safe. Even the Crown Prince died suddenly after challenging his mother's influence. His brother Li Xian took his place, but was soon exiled and ultimately forced to kill himself. Wu's third son, Li Zhe, then became Crown Prince, but after taking the throne on the Emperor's death in 683AD, was famously removed from power within six weeks by his mother. Wu's fourth and youngest son replaced him, with Wu openly ruling in his name. In 690AD, she forced him to step down, declaring herself the founding emperor of a new Zhou dynasty, and taking the name Wu Zetian.

But as brutal as her rise to power undoubtedly was, her rule proved to be an enlightened one.

She reformed the educational and governmental selection process so that talented people were promoted, regardless of rank. She boosted agricultural production by rewarding good administrators, punishing those who taxed the peasants too heavily,

re-allocating land fairly and improving public works. She strengthened defence and foreign relations, so that by 697AD, military threats in the far northwest had been overcome and territorial limits extended deep into Central Asia. She also completed the conquest of the upper Korean peninsula. Notably, she made Buddhism the favoured state religion ahead of Daoism.

By the time she died 15 years later, Wu had created a powerful and prosperous regime and social stability. She was buried in the Qianling Tomb in Shaanxi province.

Yet despite her undoubted achievements, history has been unkind to Wu Zetian, with accounts describing her as having "a heart like a serpent and a nature like that of a wolf ... she is hated by gods and men alike".

Today, most historians admit that her ruthlessness and cruelty were no worse than those of male emperors at the time. She has simply been the victim of double standards, reinforced by the sexism of the Confucian beliefs followed by official Chinese historians over the centuries.