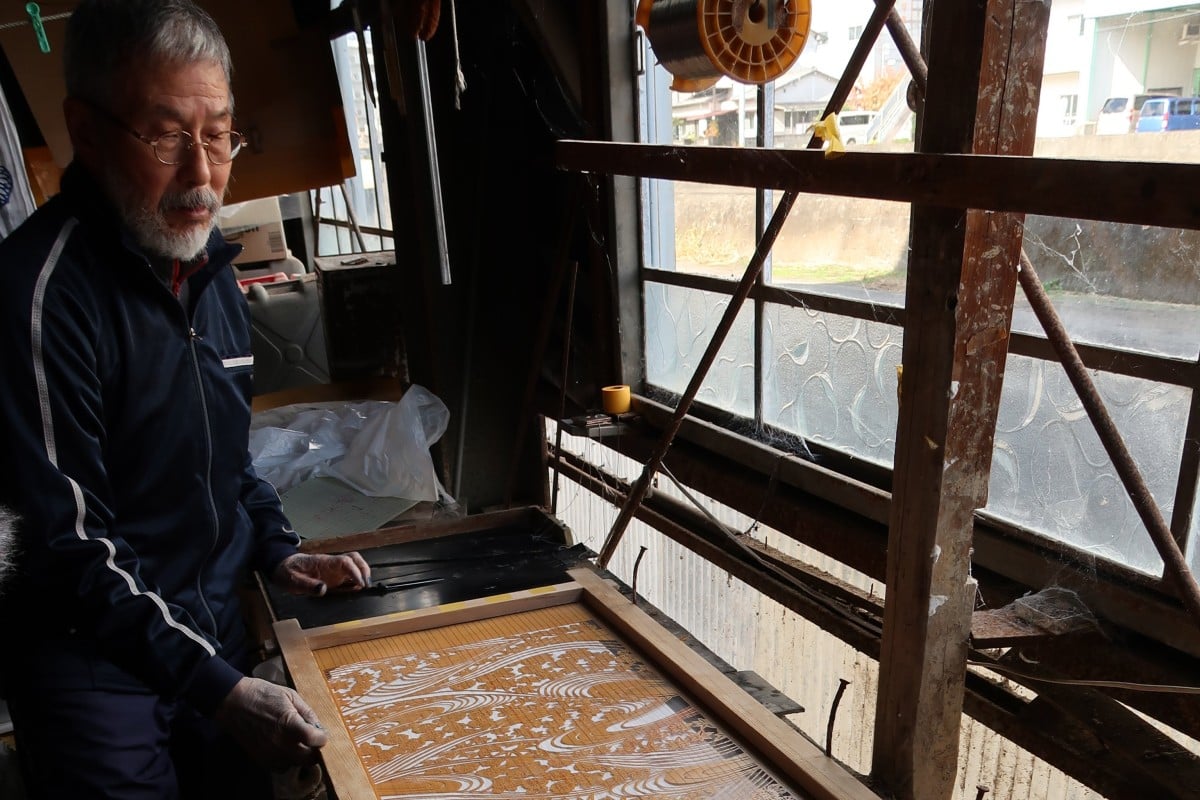 Toshiharu Furusho is a sixth-generation traditional indigo dyer who has been recognised by the Japanese government as an artisan with special intangible cultural skills. Photo: Julian Ryall

[1] From the tips of his fingers to well above his wrists, Toshiharu Furusho’s skin has taken on the colour of his profession. The 74-year-old is a sixth-generation traditional indigo dyer who has been recognised by the Japanese government as an artisan with special intangible cultural skills.

[2] For nearly 50 years, Furusho has combined wood ash, lime, yeast, black sugar, and the dye from fermented indigo leaves – known as sukumo – in perfect ratios at his ramshackle factory in the backstreets of Tokushima city. Only when he is satisfied that the fermentation process has run its natural course – which can take up to a month – will he reach for lengths of material or finished clothing. He will then repeatedly dip them into stone tubs of the mixture, before squeezing and rinsing them by hand.

[3] As he hangs the clothing up to dry, Furusho nods his head. The colour, known as Awa-Ai, is the perfect shade of deep, dark blue. It is synonymous with the indigo dyeing that originated in the Indus Valley around 5,000 years ago, before travelling the Silk Road and reaching Japan in the Nara period, between AD710 and 794.

[4] In eastern Tokushima, indigo plants thrived in fields alongside rivers that were regularly swollen by typhoons or summer storms, bringing nutrient-rich soil from the highlands further inland. Thus, the city became the centre of indigo dyeing in Japan. Prized for its attractive hues, cloth that has been treated with indigo also has antibacterial properties. It is considered more comfortable for those with skin allergies and even has a reputation for keeping mosquitoes at bay during the summer months.

[5] “The most attractive part of clothes that are coloured with natural dyes is that the shades change gradually as they are worn, making each piece unique,” said Furusho.

[6] Inevitably, however, the industry has been challenged by technology, including the introduction of chemical dyes and factories that operate on a vast scale. Furusho said he was one of only five traditional indigo dyers still operating in the prefecture. Yet he remained upbeat, as he firmly believed that the best results were still from the ancient, tried-and-tested methods of dyeing. His daughter, Michiko, has been working alongside him for many years and is determined to take over the business and continue the family tradition.

[7] That is music to the ears of Osamu Nii, the sixth generation of his family to grow indigo plants. At his farm in the Itano district outside Tokushima city, Nii cultivates about six hectares (14.8 acres) of plants and, despite being 73 years old, has no intention of retiring. “I enjoy my work, but I also enjoy seeing the younger generations come in and be interested in this tradition,” he said, adding that his son and grandson already worked alongside him and would, in time, take on the farm. “It might look like hard work, but I have been doing this for more than 50 years, so I’m used to it.”

[8] “This is our family business, and I do not want it to die out,” Nii said. “Dyers need what we produce, and we are both an important part of making sure that the culture of indigo dyeing does not disappear. I want to hand that on.” Source: South China Morning Post, December 24

1. What does the “colour” in paragraph 1 refer to? A. the dye from fermented indigo leaves B. the colour produced from mixing wood ash, lime, yeast and black sugar C. Furusho’s job as an indigo dyer D. all of the above

2. Find a word or phrase in paragraph 2 that means “in very bad condition and need of repair”.

3. What does the phrase “Furusho nods his head” in paragraph 3 imply?

4. Why might someone opt for clothes that have been treated with indigo? Give two reasons from the text. (2 marks)

5. According to paragraph 5, why does each piece of clothing made with natural dyes become the only one of its kind?

6. Based on your understanding of paragraph 7, why is Michiko’s decision to take over the indigo business “music to the ears of Osamu Nii”? A. because he intends to retire and pass his indigo farm to Michiko B. because he has plans to open up an indigo factory in Tokushima to keep the traditional trade alive C. because the two trades are linked and Michiko’s decision has a direct effect on his family business D. information not given

7. What has been the impact of technology on traditional indigo dyers?

8. Decide if the following statements are True, False or Not Given in the text. (i) Indigo-dyed clothes were a measure of social status and wealth during the Nara period. (ii) Furusho is sceptical of new textile dyeing methods that allow clothes to be mass-produced. (iii) The nutrients in the soil found in Tokushima give indigo plants their characteristic deep, dark blue. (iv) Nii is worried about the uncertain future of his indigo farm because of a lack of successors.

9. In which section of a magazine might you find this article? A. trending styles B. up-and-coming fashion C. contemporary visual arts D. traditional crafts

Osamu Nii is the sixth generation of his family to grow indigo plants. Photo: Julian Ryall

1. A 2. ramshackle 3. He is satisfied with the colour of the dye on the clothes. (accept other similar answers) 4. They are ideal for people with skin allergies; they have antibacterial properties; they can keep mosquitoes at bay during the summer months (any two) 5. because the shades of the dye change gradually as the clothes are worn 6. C 7. Technology has allowed for the mass production of clothes, pushing out traditional indigo dyers. 8. (i) NG; (ii) T; (iii) F; (iv) F 9. D

YP
We cover the latest news, views and stories on Hong Kong students, school life, sport and local education, as well as keeping tabs on what’s hot and what’s not.