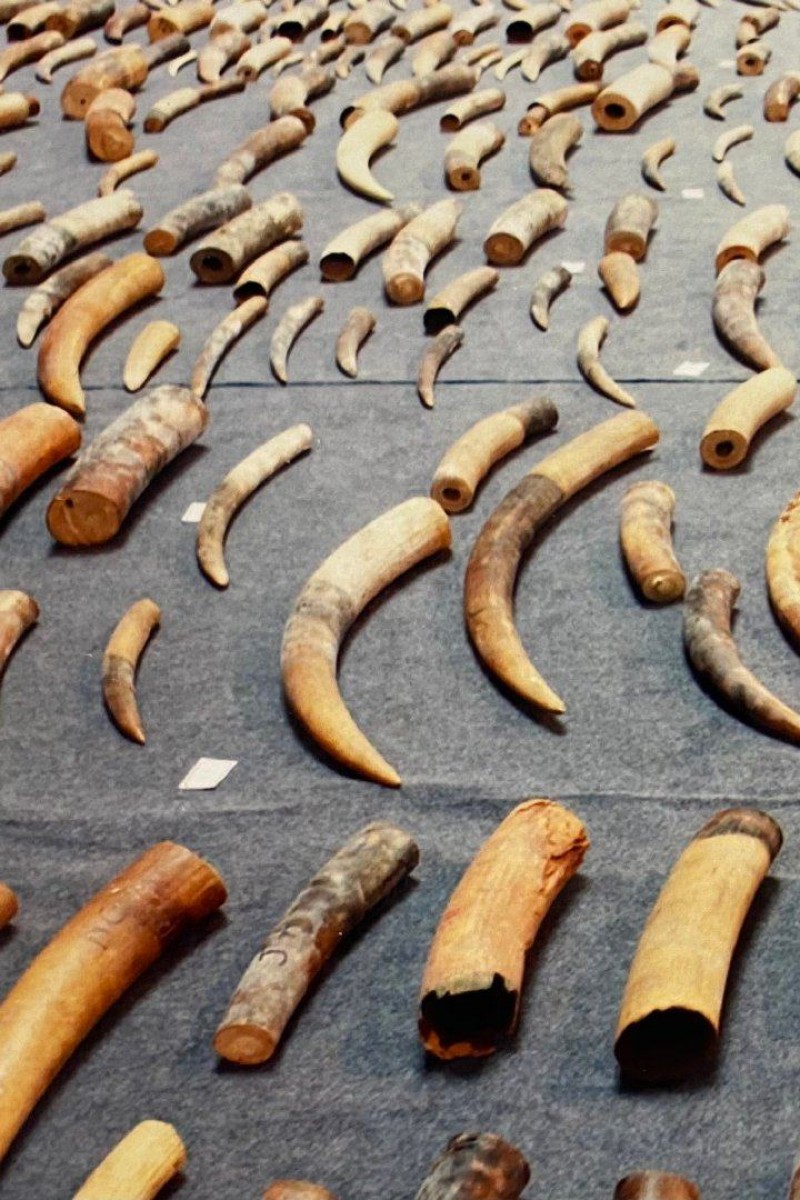 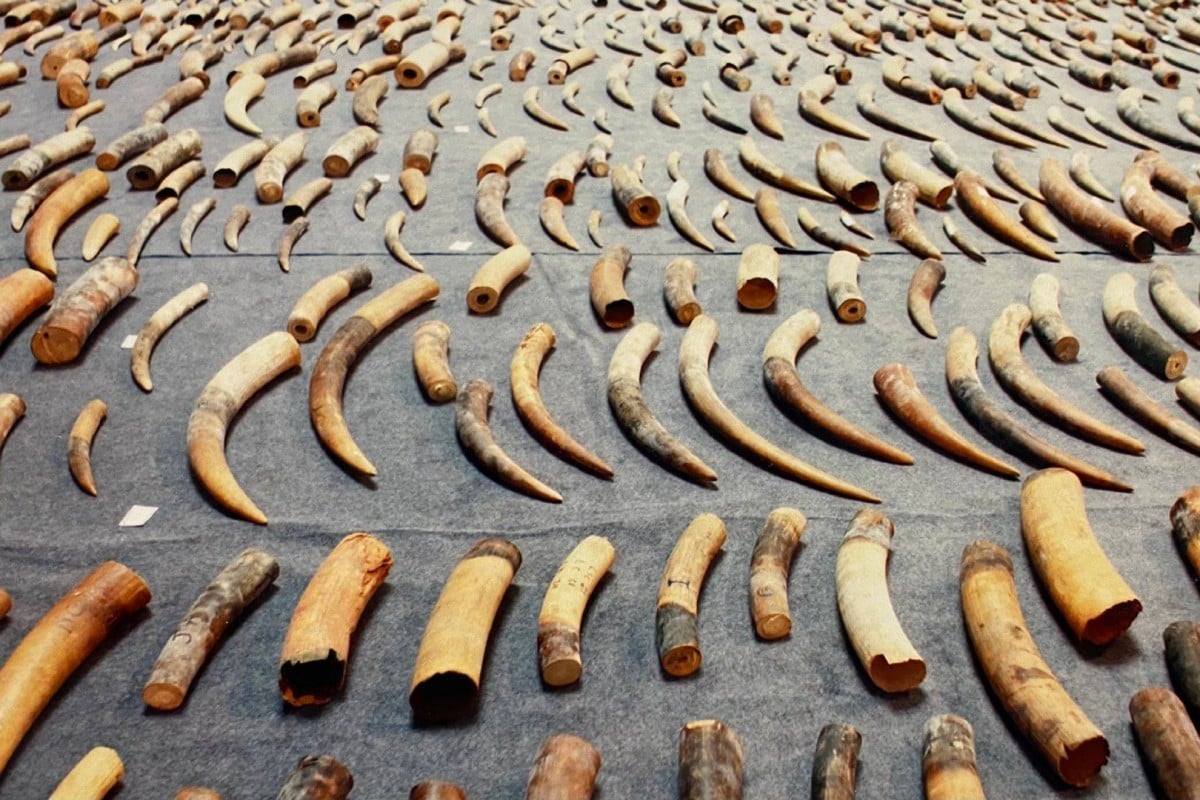 Traders sometimes try to cover up illegal sales of elephant ivory by claiming it is mammoth ivory. Photo: Captured from Weibo

[1] Scientists at the University of Hong Kong (HKU) are developing a rapid test capable of distinguishing between elephant and mammoth ivory that could help fight the illegal trade in elephant ivory. The new method, which measures isotopes in a one-gram sample, could return results within a day, much faster than sending samples overseas for age dating or a weeks-long DNA analysis, said associate professor David Baker, from the university’s school of biological sciences. “Our hope is that we can help at least distinguish these two things and close this loophole that exists here with the legal sale of mammoth ivory,” he said.

[3] About 20,000 elephants are killed every year for their tusks, which are in high demand in some parts of Asia, according to WWF. Mammoths have long been extinct, but their tusks, preserved in the tundra in places such as Siberia, are dug up from the permafrost. Jovy Chan, the manager of wildlife conservation at WWF-Hong Kong, said the new tool could make it easier and faster for authorities to identify smuggled elephant ivory.

[4] To help develop the new tool, WWF provided HKU’s team with ivory samples procured before the ban on trading elephant ivory came into force last year. The team said two of the samples sold as elephant ivory had been identified as mammoth ivory in isotopic tests at the HKU laboratory, and they would now be retested using another method to ensure the accuracy of the new tool.

[5] Baker, who is also director of HKU’s stable isotope laboratory, said the team was aiming to expand its data set from 20 to more than 60 samples to better prove the method’s ability to distinguish between the two kinds of ivory. He said: “If this works, and if the government wanted us to do that test, we could do it at very short notice. This helps to circumvent some of the challenges of not having an age-dating facility nor a rapid test for DNA.”

[6] Baker said it could take months for authorities to obtain results from overseas radiocarbon age-dating facilities, which determine if the ivory is ancient or modern. Hong Kong does not have such a machine and one can cost around HK$40 million.

[7] According to Baker, another way to distinguish between elephant and mammoth ivory is to have trained personnel observe the lines and patterns on the tusks, called Schreger lines. But not all products would show those lines clearly, especially if the ivory had been carved into an ornament, he said. It was also not practical to ask for a product to be sawn in half to show its cross section.

[8] Baker said the new method was minimally invasive to ivory products because only a small amount of sample was extracted with a dental drill. “We only need less than a gram of material, which for ivory is just a stack of powder,” he said. The researchers would then measure isotopes, which are atoms of the same element that have different numbers of neutrons. Baker said that was a way of fingerprinting materials to understand where they came from.

1. According to paragraph 1, the purpose of the rapid test is to ... A. draw attention to elephant conservation efforts. B. tackle trade in elephant ivory. C. achieve a landmark ban on the ivory trade. D. document the history of the illegal ivory trade.

2. What is the usage of age dating and DNA analysis that is mentioned in paragraph 1?

3. According to paragraph 2, what legal loophole exists in the ivory trade in Hong Kong and mainland China?

4. Find a word or phrase in paragraph 3 that has a similar meaning to “contraband”.

5. Based on paragraph 4, how did WWF contribute to HKU’s research?

7. Why is the method of differentiating between elephant and mammoth ivory in paragraph 7 not ideal? (2 marks)

8. Based on your understanding of the article, the new method is superior to existing ones because ... A. it causes very little damage to ivory products. B. it measures isotopes that help researchers to make a clear distinction between elephant and mammoth products. C. it is readily available in Hong Kong. D. all of the above

9. Decide whether the following statements are True, False, or the information is Not Given in the text. Blacken ONE circle only for each statement. (4 marks) (i) Using age dating on elephant ivory requires a larger sample than DNA analysis does. (ii) Some traders try to pass off mammoth ivory as elephant ivory because the former is more valuable. (iii) Hong Kong currently has a radiocarbon age-dating machine, but it cannot distinguish between different types of ivory samples. (iv) Isotopic tests involve analysing a material’s atoms and their neutrons.

Mammoth tusks are dug up from the permafrost, and it is legal to sell them in Hong Kong and mainland China. Photo: Handout