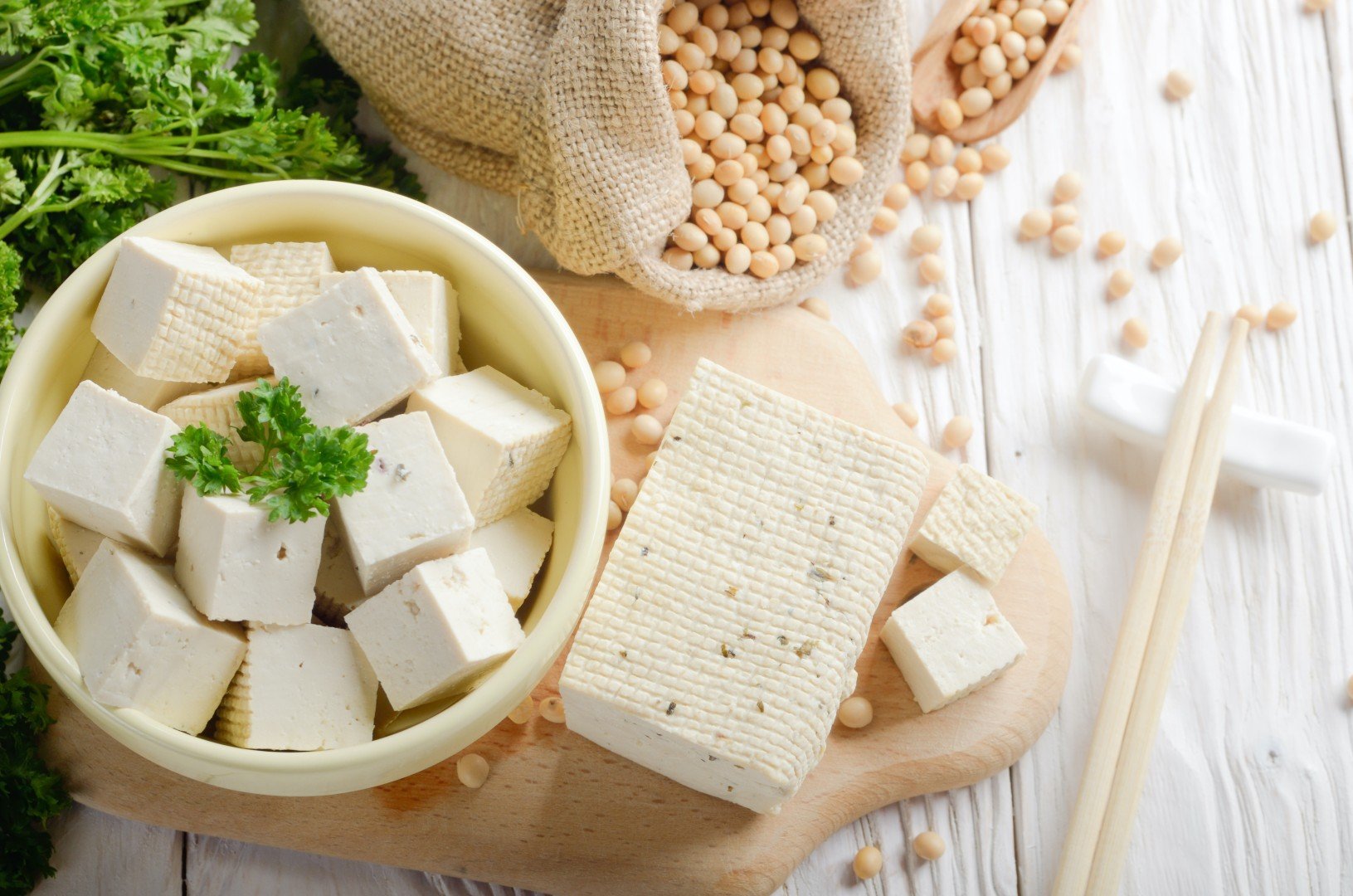 Tofu explained: how it's made, the different types, and recipes that use tofu
6mins reading

Coagulated soybean milk isn’t the sexiest descriptor for bean curd, but coagulated animal milk isn’t a great way to describe cheese, either. Of course, the process of making both isn’t nearly as simple as adding a coagulant to the respective milks. Both are further processed - almost always by pressing to rid them of excess liquid, and sometimes, adding ingredients to change the flavour, followed by (again, sometimes) ageing. Wait, flavoured and aged tofu? Yes, but we’ll get to that in a minute.

How tofu is made

Tofu is the name and spelling used most often for bean curd, but it is actually the Japanese word for a Chinese invention - doufu. There are many theories and legends about how bean curd first came into being, but it’s generally accepted that it’s been eaten in China for more than 2,000 years, followed by Japan then other parts of Asia.

It’s made with soybeans, water and coagulant, and its producers and fans would argue that the quality of each is important. Artisinal producers insist on water from mountain streams, organic, non-GMO soy beans, and a precise amount of coagulants, which are sometimes used in combination and can range from ordinary Epsom salts (rarely used commercially) to food-grade calcium sulphate (gypsum) or magnesium chloride (nigari).

To make bean curd, soybeans are soaked, pureed, then simmered to rid them of their raw taste and make them digestible. The mixture is strained to remove the solids, heated again and the coagulant is stirred in. The curdled milk is strained a second time (to remove the watery whey) then the curds are pressed under weights to make them cohesive. How long the curds are pressed determines whether it’s soft, medium or firm.

Is it good for you?

It depends on what you’re looking for. It’s been touted as the world’s healthiest food, but as with everything, it should be eaten in moderation - you couldn’t survive solely on tofu. It’s a low-fat, high protein, cholesterol-free ingredient with plenty of essential vitamins, minerals and amino acids. It’s great for vegetarians as a meat- or seafood-substitute (although they should make sure their diet includes fat, which is essential for health). Consumption of tofu is believed (but not conclusively proven) to reduce the risk of certain types of cancer, lower cholesterol, and help women going through menopause.

There are many types of bean curd products, and they have different uses. In well-stocked supermarkets, you’ll find at least three types of fresh bean curd.

Soft bean curd (sometimes called silken tofu)
The softest bean curd you’ll find in traditional block form, although it’s also sold in tubes. It takes great skill to cut soft bean curd into thin slices without them falling apart; ditto with cooking it without it losing its shape. Home cooks will usually serve it in blocks, or add it to stews where its shape doesn’t matter.
Use in:
Korean soft beancurd stew
Cold bean curd with century egg and pork floss
Vegan Thai steamed beancurd

Medium bean curd (sometimes called regular bean curd)
Probably the most versatile because it’s firm enough to be sliced and cooked without losing its shape. It’s good in quick-simmered dishes, because it absorbs the flavours of the other ingredients.
Use in:
Vegan pan-fried tofu with tomatoes and mustard seeds
Korean beanpaste stew
Mapo doufu

Firm tofu
The firmest of the three readily available bean curds, because the water content is lower. It’s used in long-simmered and stir-fried dishes, where you want the bean curd to hold its shape. It’s also the type to use when you need the bean curd as a filler for dumplings or fritters, because the low water content won’t dilute the flavour, or make the wrappers soggy.
Use in:
Pad thai
Tofu fritters
Kimchi mandu

Other types of tofu

Doufu fa (bean curd “flower”) is the softest, smoothest and most delicate of soybean products. In Hong Kong, it’s usually eaten with a ginger-flavoured syrup, or sprinkled with Chinese brown sugar. You can sometimes find this in supermarkets, where it’s sold in small plastic tubs, but the best is made at tofu shops.

Fu yu (which is off white) and naam yu (reddish in colour) are often called Chinese cheese, although they don’t contain dairy products. They’re made by putting fresh bean curd in rice wine brine and ageing it, which makes it denser and creamier. Usually sold in jars, it’s used as a flavouring, instead of a main ingredient in dishes.

You won’t find stinky tofu in supermarkets; instead, it’s sold as street food and restaurants, usually fried and served with chilli sauce, but sometimes it is simmered in soups or stews. Like fu yu and naam yu, it’s fresh tofu that’s been brined and aged, but with this, the odour is much more pungent. The flavour isn’t nearly as strong as the scent, though.

Egg tofu is often sold in supermarkets alongside the soft, medium and firm tofus. It’s distinctive because of its pale to bright yellow colour, and because it’s usually sold in clear tubes (although sometimes it’s available in blocks). It contains eggs (of course) and colourings, and has a delicate, jelly-ish texture.

This is tofu that’s been compressed so that it is very firm, with little moisture and a dense, meaty texture. Sometimes, it’s been simmered in five-spice mixture giving it a brown exterior, although when cut open it has the same off-white colour of fresh tofu. It’s often used in the mock-meat dishes at Buddhist vegetarian restaurants.

Frying changes the texture of tofu, making it puffier, spongier and more absorbent. The Chinese version looks like small wrinkled tan-coloured blocks; the Japanese ones are flatter, which, when cut in half, reveals a pocket that can be stuffed with ingredients. Cutting both types open to reveal the interior makes them more absorbent than if they’re used whole.

Bean curd skin doesn't actually come from bean curd; instead, it's made of fresh soybean milk, which, when heated, forms a thin, delicate sheet on the surface, like the skin that forms when heating cow’s milk. The skin is lifted off, and can be used immediately (when it’s very soft) or dried (which needs to be hydrated, and has a chewier texture). The dried form is sold in bags in supermarkets.

Like bean curd skin, tempeh isn’t a bean curd product, although it is made of soybeans, but it belongs in this article because it, too, is a good plant-based protein alternative to meat. Tempeh has a much rougher texture than bean curd, because the hulled soybeans are left whole before being fermented with an edible mould, then shaped into firm cakes. When you slice open a tempeh cake, you can see the soybeans suspended in the white mould. It has a stronger taste than most types of tofu, and is delicious mixed with sambal or another assertively seasoned sauce.