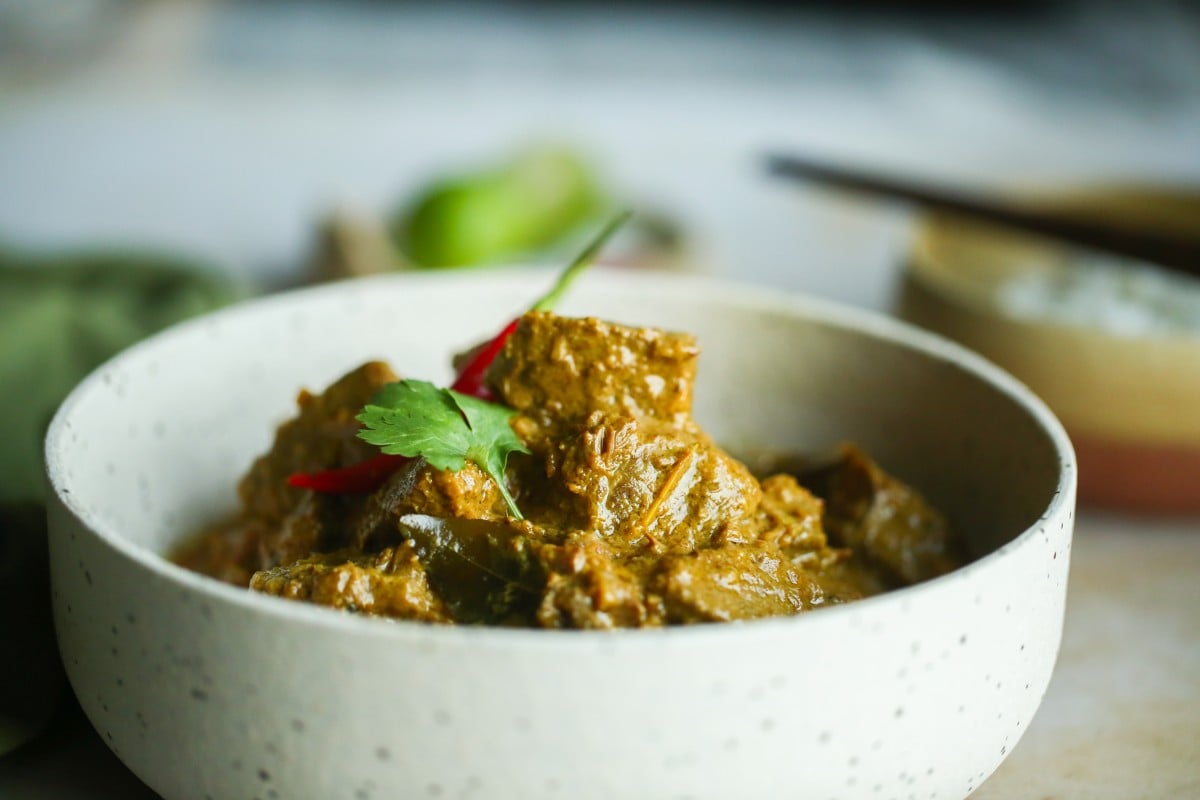 Beef rendang is a wonderfully intense braised dish from Indonesia. There are as many recipes for beef rendang as there are cooks who make it. It's a complexly flavoured dish because of the large amount of spices and herbs. If you have the time, make the rendang a day (or longer) before you intend to serve it - it will taste better after being reheated. It's usually served with rice but it also goes well with Indian bread. Serve it with pickles or a sharply flavoured vegetable dish, to balance the richness of the rendang.

I use beef cheeks for rendang, but you can also use brisket or any well-marbled cut that has a sufficient amount of tendon or connective tissue that benefits from long, slow cooking. Don't use a lean cut or the end results will be throat-chokingly dry and hard. The meat needs about three hours to simmer until it's tender, then about 30 minutes of watching it very closely - stirring almost constantly at the end - to reduce the sauce so that it's very thick. You could make it in less time in a pressure cooker, but you'll need to use less coconut milk, and you might need to adjust the amount of spices.

Purists would say that to get the best flavour, the spices should be pounded in a mortar. They're probably right, but I'm perfectly happy using my high-speed bullet blender that I bought for juicing (although I've never used it for that purpose) - it does an excellent job of making spice pastes.

Rendang usually calls for candlenuts - a nut that's very high in fat, and which is difficult to find unless you go to a good shop specialising in Southeast Asian ingredients. If you can't find them, use macadamia nuts.

There's no substitute for galangal, a rhizome that looks similar to fresh ginger (it's often called Thai ginger), but which has a different flavour. Look for it at the same Southeast Asian shop where you buy the candlenuts. It freezes well, so if you do get some, buy more than you need, then wrap it and store it in the freezer, for future dishes. If you can't find galangal, then use fresh peeled ginger, but know that the rendang will taste very different. Break the dried chillies in half and shake out as many seeds as possible. Put the chillies in a bowl and add about 60ml (¼cup) of warm water. Leave to soak for about 30 minutes, or until the chillies have softened. Drain the chillies then put them into a blender or small food processer (or a mortar). 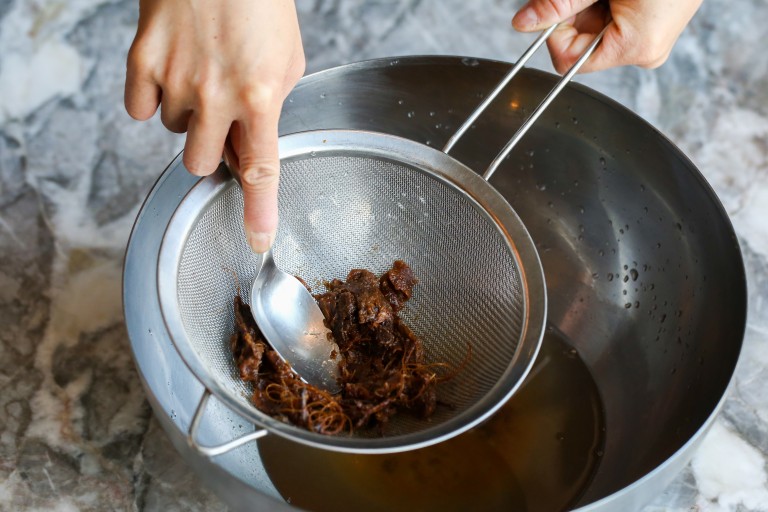 Soak the tamarind pulp in 100ml (¼ cup, 2tbsp and 2tsp) warm water and leave for about 15 minutes. Strain through a small sieve, pressing on the solids to extract as much flavour as possible. 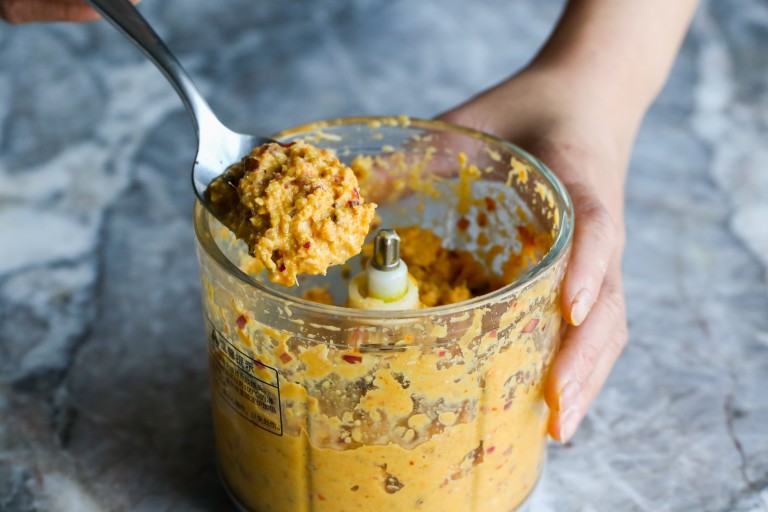 Roughly chop the shallots, garlic, ginger, turmeric and galangal, then add them to the blender. Break the nutmeg into smaller pieces - wrap it in a small towel to prevent the pieces from flying all over the place, then whack it with a metal meat mallet. Break the cinnamon stick into smaller pieces, then put it and the nutmeg into the blender. Roughly chop the lemongrass stalks, then put them, the cardamom pods and candlenuts into the blender. Add the tamarind liquid, sugar, salt and fish sauce. Blend the ingredients to a thick, rough paste. If needed, add some warm water so the ingredients grind more easily. 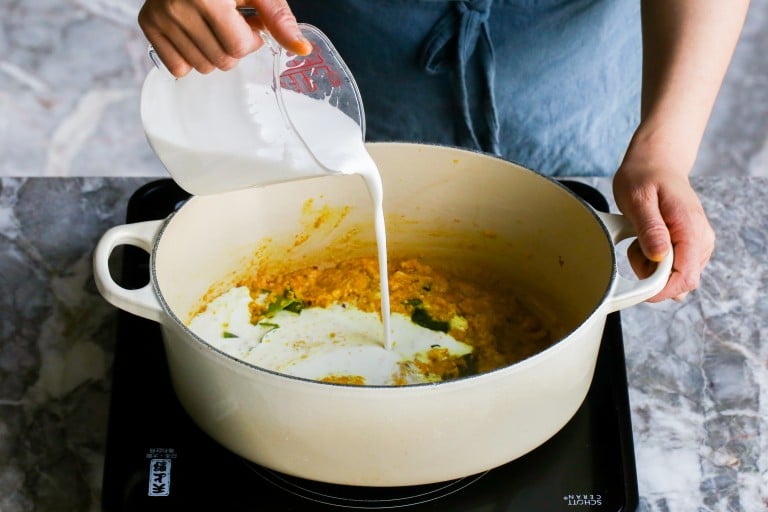 Pour the oil into a large pot and heat it over a medium flame. When the oil is hot, add the curry leaves and kaffir lime leaves and fry until fragrant. Add the spice paste and cook over a medium flame. Stir frequently and cook until the paste is thick and has darkened, and the oil starts to separate out and float to the surface; this takes about five minutes, or longer if you added a lot of water when grinding the ingredients. Stir in the coconut milk. 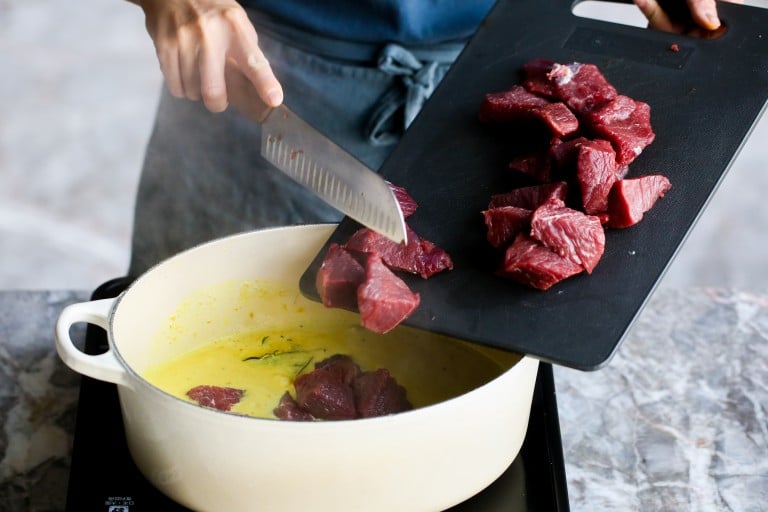 Cut the beef into 4cm (1½in) chunks then add them to the pan and stir to coat with the other ingredients. Turn the heat to low, cover the pot partially with the lid and cook at a low simmer for about three hours, or until the meat is very tender, stirring occasionally. If the sauce starts to dry out before the meat is tender, stir in some hot water.

When the meat is tender, remove the lid and fish out the curry leaves and kaffir lime leaves. Taste the sauce and add more salt and/or sugar, if necessary. Turn the heat to medium and simmer to reduce the sauce until it thickly coats the meat. Stir frequently during this time, and constantly towards the end so the spices don't burn.

Put the rendang into a serving dish and scatter toasted coconut on top. Serve with rice or bread.

7/7
Susan Jung Indonesian Main Course Beef Low-Carb Dairy-Free Gluten-Free Kosher Peanut-Free Medium
Diet definitions
Liking this recipe?
Now you can save the recipe you into your own collection.
Find us on facebook
Join our community and get the latest recipes from all over Asia for you to make at home.