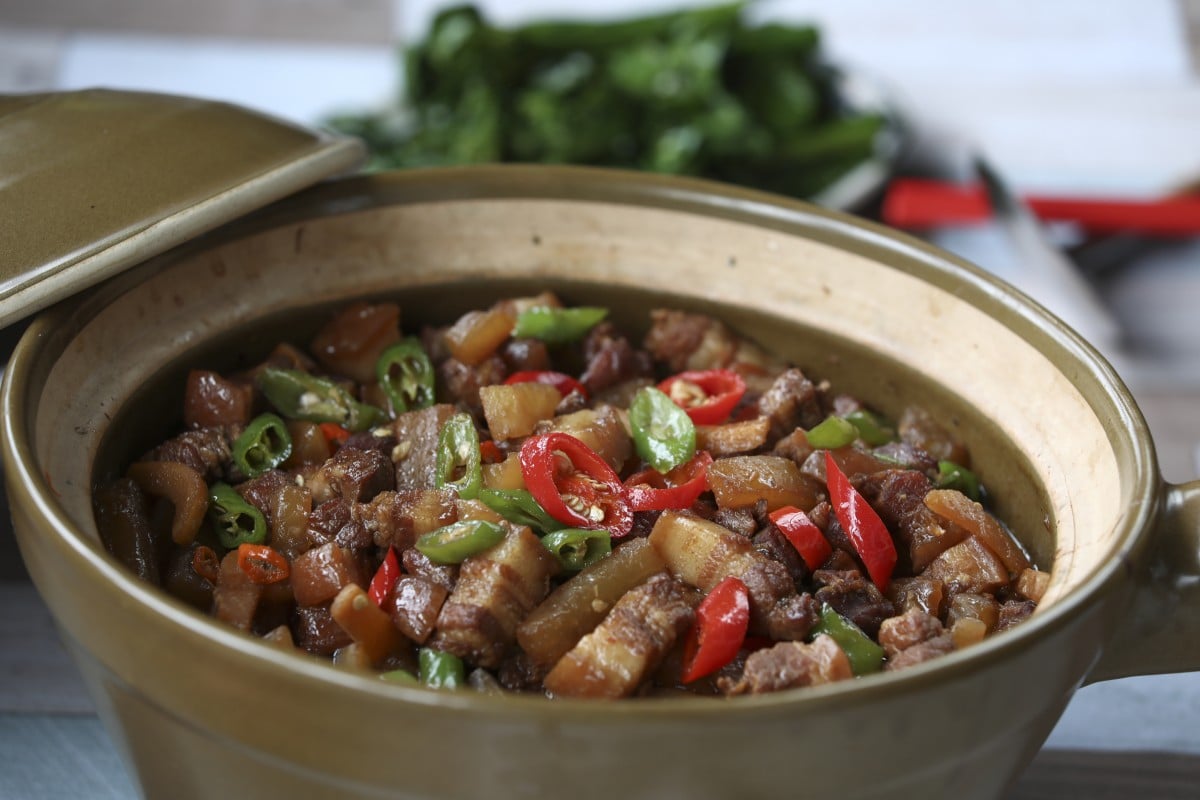 I love dishes where you can just throw all the ingredients into a pot and let them simmer. Yes, I know that browning meats before you stew or braise them gives the dish deeper flavour, but it can be messy because of all the oil splatters. This dish has plenty of flavour because of the garlic, ginger and bean paste or chilli bean paste.

I cook the ingredients in a stove-to-table Chinese clay pot (also called a sand pot) or another earthenware pot, which makes for a rustic presentation. Enamelled cast-iron pots, such as those by Le Creuset or Staub, also work. The pot should hold about two litres (two quarts).

You can vary the flavour of this dish by using different Asian bean pastes or chilli bean pastes, such as Japanese miso, Chinese doubanjiang, or Korean doenjang or gochujang. If you use bean paste without chillies, make sure it’s not the sweetened type meant for desserts.

You can also add other types of vegetables in place of the white radish (loh bok or daikon). Try fresh bamboo shoots (peeled, sliced, boiled in lightly salted water for about five minutes, then drained), lotus root (thoroughly rinsed of mud, then peeled and sliced into half moons) or water chestnuts (peeled, rinsed thoroughly, then quartered). Add these ingredients to the pot at the point when you would add the white radish. And if you like a stronger garlic flavour, slice or mince some of the garlic cloves, instead of leaving them all whole.

I like to flavour the pork with a lot of ginger. Cut the rhizome into strips about the same size as the white radish so that the pieces look almost the same when cooked. The simmered ginger is delicious because the long cooking time gives it a subtler flavour.

Be sure to buy well-layered pork belly. I use skin-on pork because it makes the sauce richer, but remove the skin if you prefer.

Slice the pork belly into thin strips about 3cm (1¼ in) long. 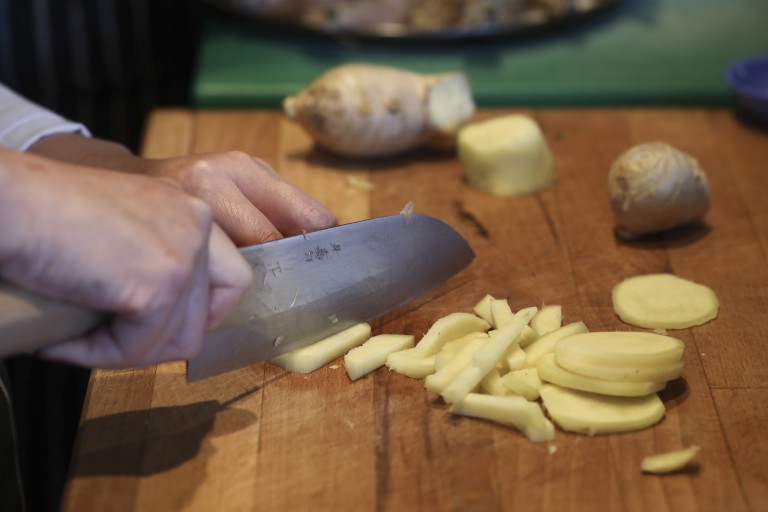 Cut the ginger and white radish into 2.5cm (1 in) strips a little thicker than the pork belly. 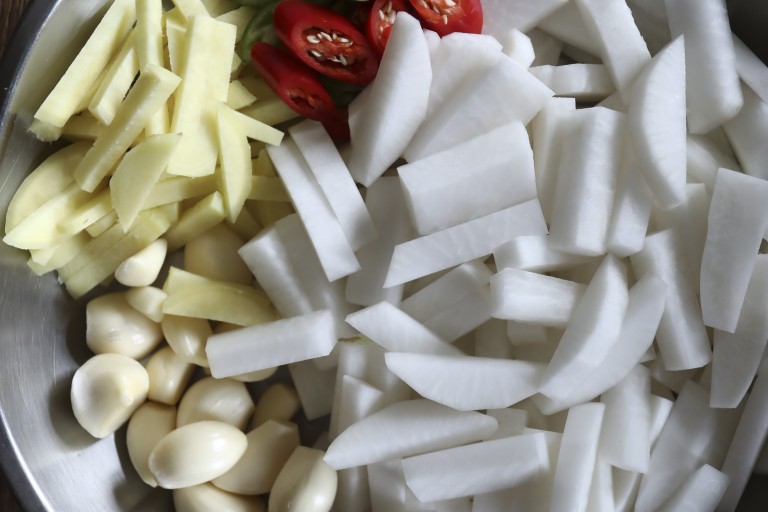 Leave the smaller garlic cloves whole and halve the larger ones. If you prefer, thinly slice or mince about half the garlic cloves, leaving the others whole.

Put the pork belly, ginger and garlic into a pot, prefer­ably one made of clay or earthenware.

Put the bean paste or chilli bean paste in a bowl, add 120ml (½ cup) of hot water and stir to dissolve. Pour this mixture into the pot and stir well. 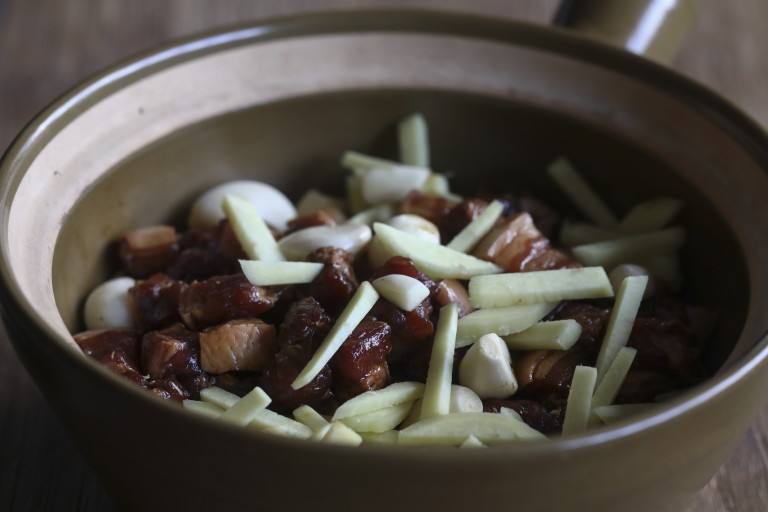 Place the pot over a medium flame and bring to the boil. Reduce the heat, cover the pot and cook at a low simmer for 20 minutes, stirring occasionally. 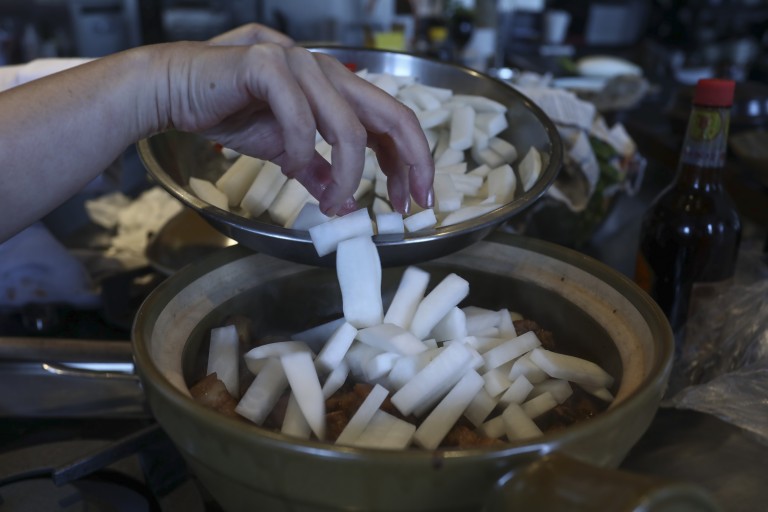 Add the white radish to the pot and stir well. Cover with the lid and simmer for about 20 minutes, stirring occasionally.

While the ingredients are simmering, cut the red and green banana chillies on the diagonal into thin slices. Cut the bird’s-eye chillies into thin rings, shaking out and discarding the seeds as you go.

Taste a piece of pork – it should be very tender. If necessary, continue to simmer until the pork is tender.

Add all the chillies to the pot and stir well, then cover with the lid and simmer for about five minutes.

Taste the sauce for seasonings and adjust, if necessary. Serve with boiled noodles or steamed rice, and stir-fried or steamed green vegetables.

12/12
Susan Jung Chinese Dinner Pork Vegetables Easy
Liking this recipe?
Now you can save the recipe you into your own collection.
Find us on facebook
Join our community and get the latest recipes from all over Asia for you to make at home.