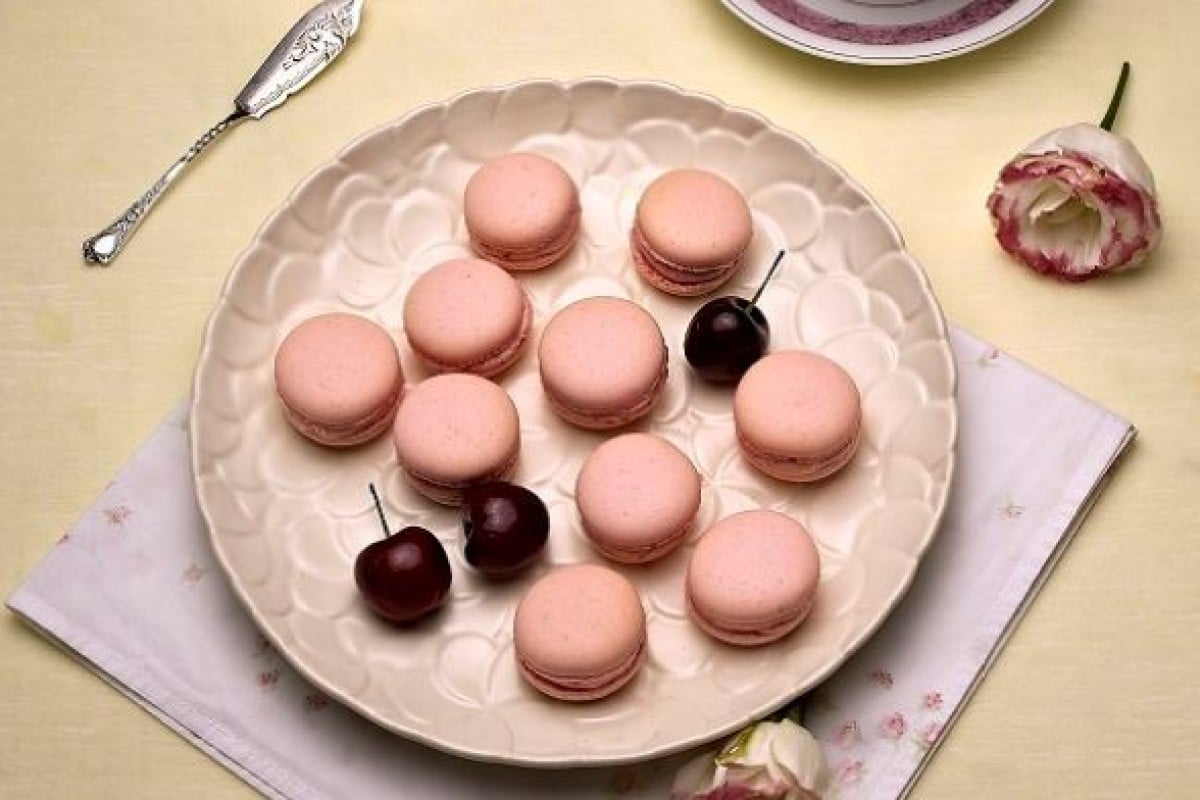 There are many types of French macarons, but the ones that most people think of are the pretty, pastel-coloured confections sandwiched together with a sweet filling.

The perfect macaron is one that is slightly risen, light, tender and moist with a little "frill" (also called a pied, or foot) at its base. With only a few ingredients, the recipe seems simple - and it's not nearly as difficult as you might think - but there are key details that will aid success.

The icing sugar (confectioner's sugar) must be pure sugar - with no other ingredients, such as cornstarch; check the label to make sure. Use commercially ground almonds, rather than attempting to make your own. Most recipes call for the icing sugar and ground-almond mixture to be sieved but I don't bother with that; instead, I grind them together to a fine powder in a food processor.

The egg white should be aged, which removes (by evaporation) some of the moisture and makes the meringue more stable. I almost always have spare egg whites (after using the yolks) in the back of my fridge, but if you don't, separate some eggs and reserve the yolks for another dish. Make sure there's no grease (such as the yolk) in the whites, or they won't whip up fully. Put the whites in a wide, shallow bowl and leave it uncovered at room temperature for about four hours.

It's crucial to get the consistency of the finished batter right; when you lift the spatula from the bowl, the mixture should drip off slowly and briefly remain on the surface before sinking gradually into the rest of the batter. When you pipe some of the mixture onto a baking tray, it should spread out slightly.

Macarons have a tendency to stick to parchment paper, so it's better to pipe the batter onto reusable, washable silicone- coated tray liners. To ensure the macarons are a consistent size, use an indelible pen to trace 2.5cm (1in) circles onto the tray liner, then flip it over so the marked side faces down (you will be able to see the marking through the liner). Leave about 1.5cm (⅔in) between the circles. After piping the macarons, leave them at room temperature so they dry out slightly - they're ready when the surface goes from glossy to slightly matte. This takes about 30 minutes on a dry day, longer if it's humid (if it's very damp, put the macarons in a room with air conditioning). It can take practice to get the baking time and temperature right - it depends on your oven and the size of the macarons.

Macarons of all types use the same basic recipe for the shells (this one is from Macaron, by pastry chef extraordinaire, Pierre Hermé), but you can vary the flavour with the filling. Because the shell is so sweet, I like a filling that balances it, so came up with this one which uses sakura paste, which has a sweet-salty flavour. Sakura paste is not easy to find, though: you might have to search online, or visit a shop that specialises in Japanese products. If you can't find it, mix strained sour cherry jam into the double cream, and add a few drops of lemon juice and a healthy pinch of salt to balance the sweetness.

This recipe demands precision, so I've given measurements in metric and imperial, rather than cups and spoons.

Put the ground almonds and icing sugar in a food processor and blend until the almonds are ground as fine as possible and the icing sugar is no longer lumpy. Add 55g (2oz) of egg white and process to a paste. Scrape the mixture into a large mixing bowl.

Put the remaining egg whites into a medium-sized mixing bowl, with the salt ready nearby. Fit a hand-held mixer with the beater attachments.

Put the granulated sugar in a small saucepan, add 60ml (¼ cup) of water and stir to dissolve. Bring to a simmer over a medium flame then use a wet pastry brush to wash the sugar crystals from the sides of the pan. Cook the syrup without stirring until it reads 115° C (239°F) on a candy thermometer or infrared thermometer.

Immediately start whisking the egg whites with the hand-held mixer and when they are frothy, add the salt.

Watch the candy thermometer in the pan and when the syrup reaches 118°C (244°F), remove it from the heat. Immediately start pouring the syrup in a steady stream into the egg whites while mixing on medium speed. When all the syrup has been added, turn the mixer speed to high and whip the meringue until tepid.

Mix a few drops of liquid food colouring into the meringue. Don't add too much - it's better to be a little too subtle than to make the macarons too bright.

Add two-thirds of the meringue into the almond-sugar mixture and stir until combined. Add the remaining meringue and fold it in gently, stirring until the consistency is right - when you lift the spatula, the batter will drip off slowly into the bowl, stay on the surface briefly, then sink slowly into the rest of the batter.

Scrape the mixture into a large piping bag fitted with an 8mm (⅜in) plain tip. Put the prepared tray liners on the baking trays and pipe out the batter, using the marked circles as a guide - pipe them a little smaller than the circles, so they have room to spread. After piping out the batter, bang the tray firmly on the work surface to remove large air bubbles. Leave at room temperature to dry slightly.

Preheat the oven to 180°C (350°F). Bake the macarons one tray at a time for seven minutes, then lower the heat to 160°C (320°F) and bake until done. If you're using a convection oven, the macarons will take about 10 more minutes. If it's a regular oven, they'll take a little longer and you'll need to turn the pan around halfway through. The surface of the macarons should darken only slightly; if they get too dark, lower the heat to 140°C (285°F). To check if the macarons are ready, touch the surface of one and try to jiggle it slightly; it should stand firm.

Cool the shells to room temperature. Use a metal spatula to loosen the macarons from the liner.

Whisk the double cream with some sakura paste and sugar to taste. Add a little liquid food colouring to tint the mixture pale pink.

Put the sakura cherry blossom cream into a piping bag fitted with an 8mm (⅜in) plain tip. Pipe a generous blob on the flat side of half the macaron shells, then sandwich with a second shell. Once filled, the macarons should be eaten within a few hours.

12/12
Susan Jung Fusion Dessert Low-Sodium Gluten-Free Kosher Peanut-Free Pescatarian Vegetarian Hard
Diet definitions
Liking this recipe?
Now you can save the recipe you into your own collection.
Find us on facebook
Join our community and get the latest recipes from all over Asia for you to make at home.