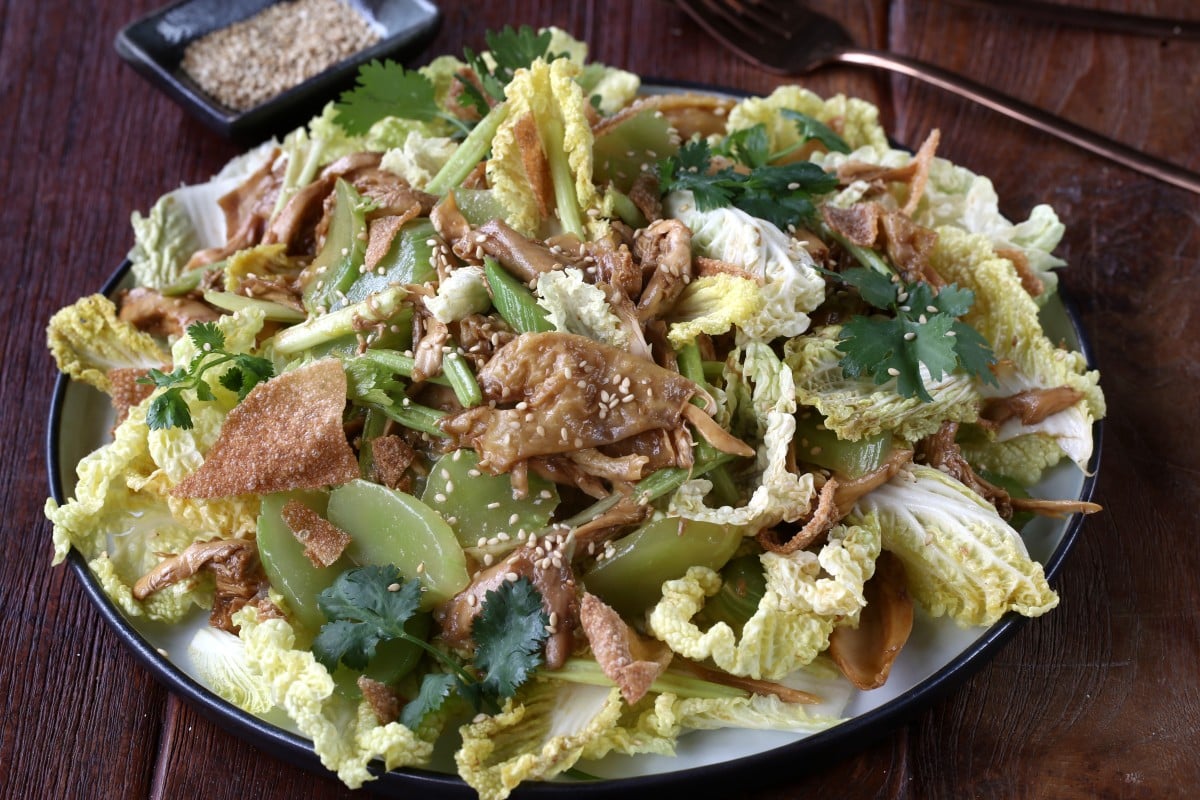 I’m not exactly sure how Chinese chicken salad came to be, although there are several stories about who created it in the United States. The typical dish you're served in the US isn’t like anything you would find in China, where raw vegetables are, tradition­ally, rarely consumed.

The worst versions of this Chinese-American salad add the vaguest “Asian” ingredients, such as canned mandarin oranges, pickled ginger and/or canned water chestnuts.

At its most basic, the salad contains shredded iceberg lettuce, chopped or shredded chicken that’s been mixed with soy sauce and other seasonings, and fried noodles or wonton skins, for crunch.

My version of the dish uses small Chinese cabbage (also called napa cabbage), because it has a lovely crisp texture, and shredded roasted chicken. You could buy a roasted chicken from a shop, which saves a lot of time. But cooking it yourself gives you an advantage: the drippings, made up of chicken fat and juices, which I use in place of oil when making the dressing (mixing it with rice vinegar), to toss with the cabbage and other greens.

I also like to add celtuce (stem lettuce), but the vegetable is not easy to find. Asian cucumbers make a fine substitute.

Dry the chicken inside and out with paper towels. Use a sharp cleaver to chop off the head and feet (save the feet for later. Simmer them with the bones from the carcass after the bird has been roasted, to make stock for another dish). Pull the excess fat out of the cavity of the chicken. Place the fat in a roasting pan that is slightly larger than the chicken. Lightly sprinkle salt over the bird and in the cavity, then place it breast-side down in the roasting pan with the chicken fat. If you have time, leave it at room temperature for an hour, but you can also roast it immediately.

Preheat the oven to 220°C (430°F). When the oven is hot, place the pan in the oven and cook the chicken for 40 minutes, or until done. It is ready when the internal temperature is 70°C (160°F) - check by inserting a meat or instant-read thermometer into the thickest part of the thigh, but not touching the bone. Take the pan from the oven and place it on the kitchen counter to cool while preparing the other ingredients.

Quarter the cabbages lengthwise then remove and discard the core from the stem ends. Cut the leaves into one- or two-bite pieces. Rinse the cabbage leaves thoroughly, then let the pieces air-dry.

If using celtuce, peel the stalks thoroughly - the fibrous layer is quite thick. Slice the stems on the diagonal into pieces about 3mm (⅛in) thick. Bring a pot of salted water to the boil, add the celtuce and simmer until tender, then drain. If using Asian cucumbers, trim off and discard the ends, then slice the vegetable about 5mm (¼in) thick. Weigh the cucumber pieces, then multiply the weight by .015 - this is the amount of salt you will need. Sprinkle the salt over the cucumber, mix well, then leave at room temperature for about 30 minutes. Drain in a colander.

Cut the celery stalks into 3cm (1¼in) lengths. Put the sesame seeds into a small, unoiled skillet and place it over a low flame. Constantly shake the pan until the sesame seeds are fragrant and lightly toasted, then remove from the heat.

Cut the wonton skins into strips about 5mm (¼in) wide. Pour cooking oil to the depth of about 1cm (7/16in) in a medium-sized skillet and heat to 175°C (345°F). Fry the wonton skins for about 30 seconds, or until pale golden, then drain on paper towels.

When the chicken is cool enough to handle, strip off the skin - eat the crisp bits immediately and set aside the remainder. Pull the meat from the carcass. Shred the chicken into large strips. If you like chicken skin, cut the remaining skin into strips and add them to the meat.

In a small bowl, mix the oyster sauce, soy sauce, sesame oil, chilli oil (if using) and 10ml (2tsp) of rice vinegar. Pour this over the chicken meat and skin and mix thoroughly.

Pour the chicken drippings from the roasting pan into a small skillet and place over a medium flame. When the fat/juices are hot, measure 60ml (¼ cup), pour into a bowl and whisk with 15ml (1tbsp) of rice vinegar (if you like a tart dressing, mix in a little more vinegar). Put the cabbage and celery in a bowl, then pour the chicken fat/vinegar dressing over the ingredients and mix well to lightly coat the leaves.

Mix about three-quarters of the chicken with the cabbage and arrange on a serving dish or over four dinner plates. Place the remaining chicken over the salad and add the celtuce (or salted cucumbers) and sprigs of coriander (cilantro). Sprinkle with toasted sesame seeds, then add the fried wonton skins and serve immediately.

10/10
Susan Jung Fusion Main Course Poultry Vegetables Dairy-Free Peanut-Free Easy
Diet definitions
Liking this recipe?
Now you can save the recipe you into your own collection.
Find us on facebook
Join our community and get the latest recipes from all over Asia for you to make at home.