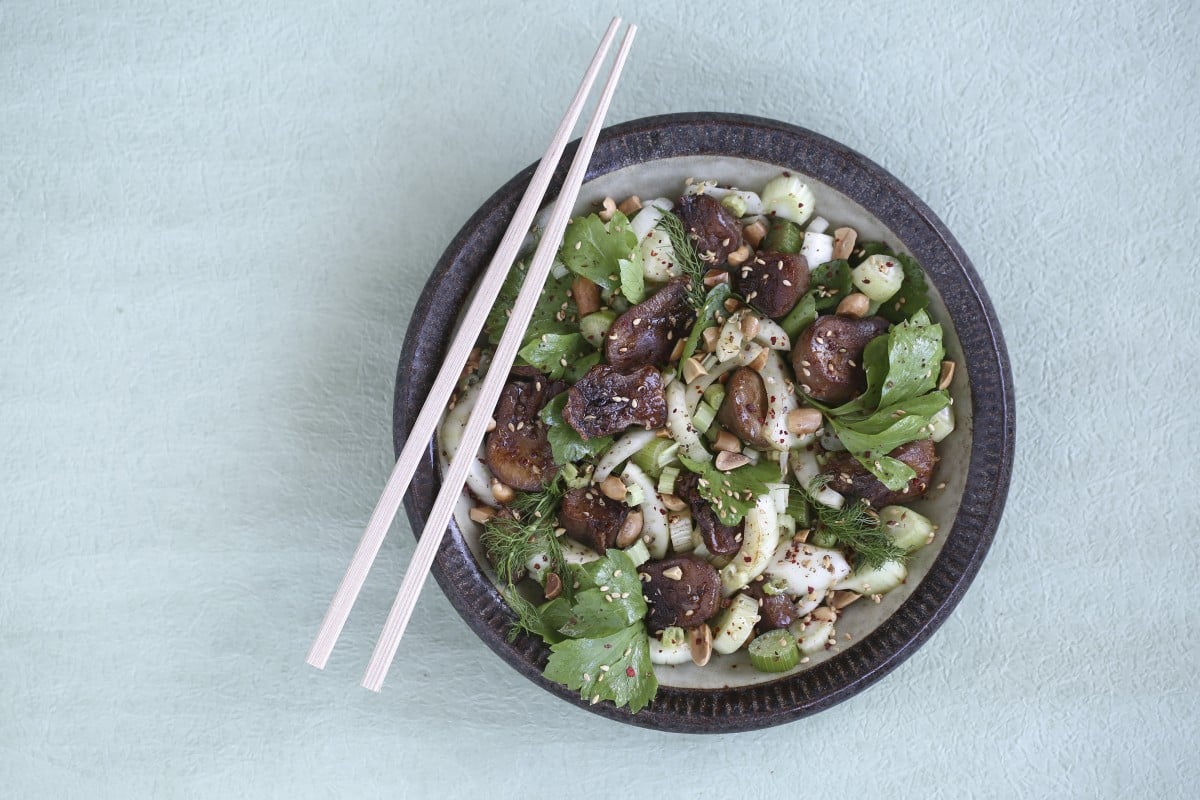 Prepared correctly, tongue is a delicious meat: it’s tender, smooth and mild. Many people recoil at the thought of eating tongue, though, probably because it’s organ meat.

Like other organ meats, tongue takes a bit of effort; after boiling it, you need to strip off the skin (it comes off easily when the meat is hot), then remove the bones. (Sometimes, the tongue will be fully clean­ed, with the inedible parts trimmed off.)

You can buy lamb tongues at shops selling halal and kosher meats, and from some butcher shops; you may need to order it in advance. It’s worth buying a few extra lamb tongues (they’re small) and cooking them at the same time; the leftover meat is delicious when thinly sliced then used in sandwiches with rye bread and grainy mustard.

Pork tongue is good, too, although it’s bigger and the flavour is stronger.

I like the round, warm taste of aged balsamic vinegar, and it’s not as sharp as some Chinese vinegars. You don’t have to use the super-expensive versions that come in small bottles, but avoid the cheap, acidic, watery stuff. Aged balsamic vinegar has a nice, balanced, intense flavour, and although it’s more expensive than the low-quality versions, a little goes a long way.

Fried shallots are sold in small bags at shops specialising in southeast Asian ingredients. You can make your own by putting thinly sliced shallots in a small pan and adding cooking oil to barely cover them. Place over a medium flame and cook until sizzling, then lower the heat. Cook at a low sizzle until the shallots turn golden, then remove from the heat. Strain the shallots from the oil and drain on paper towels; the oil can be used to stir-fry vegetables.

This recipe was inspired by a dish I ate at The Chairman, a Chinese restaurant in Hong Kong that is on Asia's 50 Best and the World's 50 Best restaurants lists.

Place the lamb tongues in a colander and rinse with cool, running water. Sprinkle the tongues heavily with salt, rub it into the meat, then rinse again. Salt and rinse the meat until the tongues are no longer slimy.

Put a medium-sized pot of salted water over a medium-high flame. Bring to the boil then add the tongues. Bring to the boil again, then lower the heat and cover partially with the lid. Occasionally, skim off any foam that rises to the surface of the water. Simmer the tongues for about an hour, or until very tender; test by poking the thick end with a skewer – it should slide in easily. Take one tongue out of the pot, put it on a plate and, as soon as it’s cool enough to handle, strip off the skin. If the skin sticks to the meat, put the tongue back in the pot and let it rewarm while working on another piece. When all of the tongues have been skinned, leave them at room temperature to cool.

Make the dressing. Finely mince the garlic clove. Put the sugar in a small bowl with the dark and light soy sauces and the balsamic vinegar. Stir until the sugar is dissolved. Add the garlic, chilli oil and sesame oil, then stir constantly while drizzling in the cooking oil. Taste the dressing and adjust the seasonings, as necessary.

Put the peanuts in a small, unoiled skillet placed over a low flame. Stir frequently until the peanuts are lightly toasted, then roughly chop them.

Put the Sichuan pepper­corns into the same skillet (no need to wash it) and place it over a medium flame. Shake the pan constantly until the peppercorns are lightly toasted. Remove and discard as many of the dark seeds as possible, leaving only the husks. Transfer the husks to a mortar and crush them to a rough powder, then mix it into the dressing.

Put the sesame seeds in the same skillet and toast them over a medium flame, shaking the pan constantly. Cool to room temperature.

Starting at the tip of the tongue, cut the meat into pieces about 8mm (⅜in) thick. When you get towards the thick base, the meat is not as even or pretty – remove and discard the fat, dark bits, cartilage and bones. Cut the larger pieces of meat in half.

Heat a skillet over a medium-high flame and oil it lightly. When the pan is hot, briefly sear the tongue slices on each side, then put them in a bowl. Stir the dressing, then add a couple of spoon­fuls to the meat and mix.

Add the meat to the bowl holding the fennel and Chinese celery and add more dressing – just enough to lightly coat the vegetables – and toss gently.

Pile the salad onto two plates, then sprinkle with peanuts, sesame seeds and fried shallots. Garnish with the Chinese celery leaves and serve immediately.

11/11
Susan Jung Chinese Lunch Lamb Medium
Liking this recipe?
Now you can save the recipe you into your own collection.
Find us on facebook
Join our community and get the latest recipes from all over Asia for you to make at home.