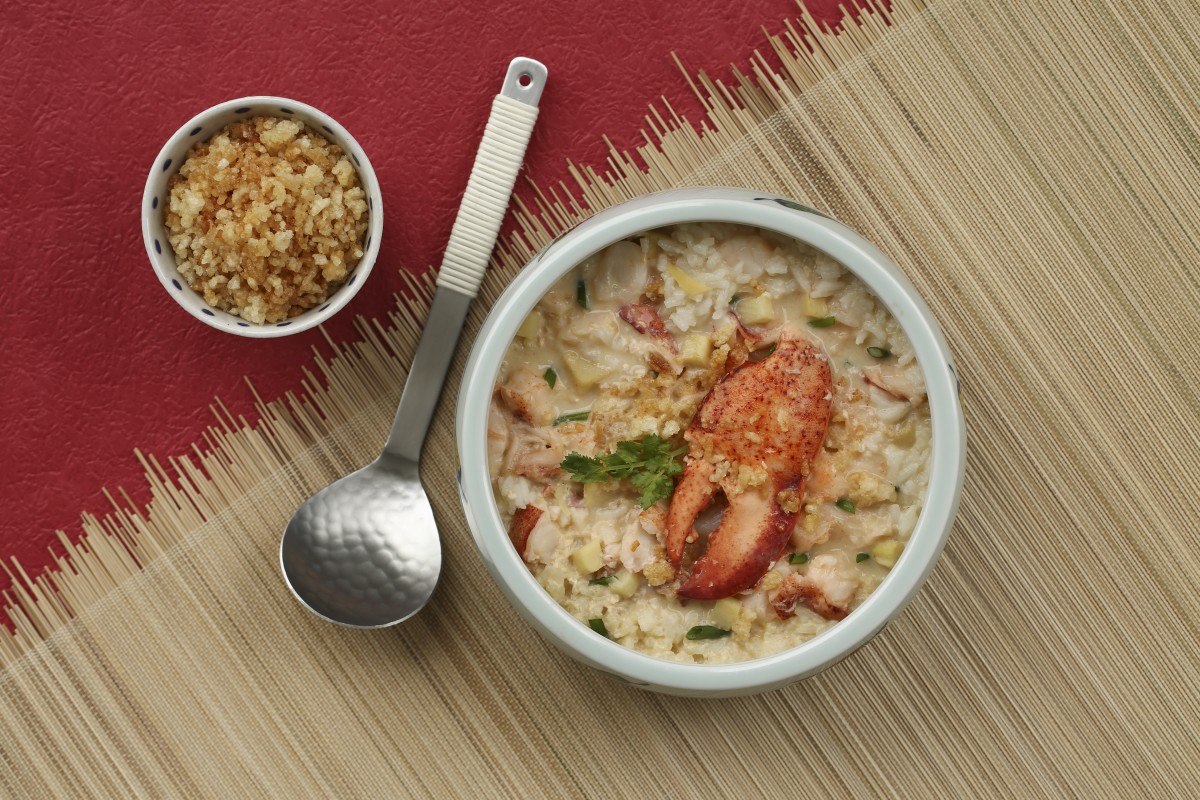 Soupy rice - cooked rice heated in a light broth - is something my mother fed to my brothers and me when we were ill. It's nutritious but has a mild flavour and so is soothing on the stomach. The texture is similar to Chiu Chow congee because the grains stay whole, rather than being cooked so long they incorporate into the broth. This version - with lobster and scallops - is a lot more luxurious, but it's still comfort food.

I like to serve this soup with rice cracklings, which add a crunchy texture and nutty flavour. Because making the cracklings is time-consuming - the cooked rice needs to be dried in the oven for about two hours - I never make less than 500g (about 18oz) at a time. Store the cracklings in a sealed glass container, where they will stay crisp for a couple of weeks. If the cracklings do get soft, heat them for about five minutes in an oven preheated to 180°C (350°F), then cool. If you are short on time (or can't be bothered), omit the rice cracklings.

If you don't have homemade fish or seafood broth on hand, use four dashi (Japanese soup stock) bags, soaked in one litre of hot water.

Make the rice cracklings. Preheat the oven to 120°C (250°F). Use slightly damp hands to break up the clumps of cold rice and spread it in a thin layer on a tray that's been lined with lightly oiled aluminium foil. Bake the rice in the oven for about two hours, turning it over as necessary so it dries evenly. When the rice is dry, pour oil to the depth of about 2.5cm (1in) in a saucepan and heat it to 170°C (340°F). Add a handful of the rice to the hot oil - the rice will expand, so don't cook too much at once. Fry the rice until it turns pale golden and stops sizzling. Drain the rice on paper towels.

Prepare the lobster. Put the lobster on its back in the sink and insert the tip of a sharp knife into the base of the tail - a spurt of liquid will come out. Hold the lobster upright over the sink until the liquid is drained out. Lay the lobster on its back and kill it by driving a sharp, sturdy knife through the head into the brain. Scrub the lobster under cold, running water. Prepare a large bowl of ice water. Bring a large pot of water to the boil and add enough salt so it tastes like seawater. Put the lobster in the pot and boil for a minute, then drain it and immediately put the lobster into the ice water. When the lobster is cool, pull off the claws and tail, then detach the top shell from the lobster head. Remove and discard the sand sac and feathery gills from the head. Scoop out the tomalley (a soft, green substance) from the head and put it in a bowl, and add the coral (if it's a female crab; these are the roe, or eggs). Crack the claws and knuckles (I use a meat mallet) and pull out the flesh, then remove the meat from the lobster tail. Save all the shells.

Scrub out the pot used to cook the lobster. Finely julienne the ginger and put it in the pot. Put all of the lobster shells (including the head) back into the pot and add a litre of fish or seafood broth, or dashi bags and one litre of water. Bring the liquid to a boil, then lower the flame, put the lid on the pot and simmer for 30 minutes. Use a large slotted ladle to remove the shells from the broth.

While making the broth, prepare the other ingredients. Peel away the tough fibres from the bamboo shoot until only the tender core is left. Cut the bamboo into 5mm (¼in) dice. Bring a pot of water to the boil, add the bamboo and simmer for five minutes, then drain. Remove the seeds and pith from the winter melon and cut away the skin. Cut the winter melon flesh into 8mm (⅜in) dice. Remove and discard the dark parts from the scallops. Cut the scallop coral (roe) into small pieces, and slice each adductor muscles into three discs. Cut the lobster claw and tail meat into 1cm (7/16in) pieces.

Stir the fish sauce into the broth, then taste it and add ½tsp of salt. Ladle 60ml (¼cup) of the broth into the bowl holding the tomalley (and roe, if any), then purée in a blender or food processor (or use an immersion blender). Stir in an additional 60ml of broth, then set it aside. Bring the broth in the pot to the boil and add the bamboo and melon. Simmer for five minutes then add the cooked rice, the scallop and lobster pieces, and the peas. Bring to the boil, then stir in the broth containing the tomalley. Taste the broth and add more salt, if necessary. Ladle the ingredients into individual bowls. Serve with white pepper and the rice cracklings on the side, so everyone can add them to the soup as needed.

5/5
Susan Jung Chinese Main Course Rice Shellfish Low-Fat Dairy-Free Gluten-Free No-Sugar Peanut-Free Medium
Diet definitions
Liking this recipe?
Now you can save the recipe you into your own collection.
Find us on facebook
Join our community and get the latest recipes from all over Asia for you to make at home.