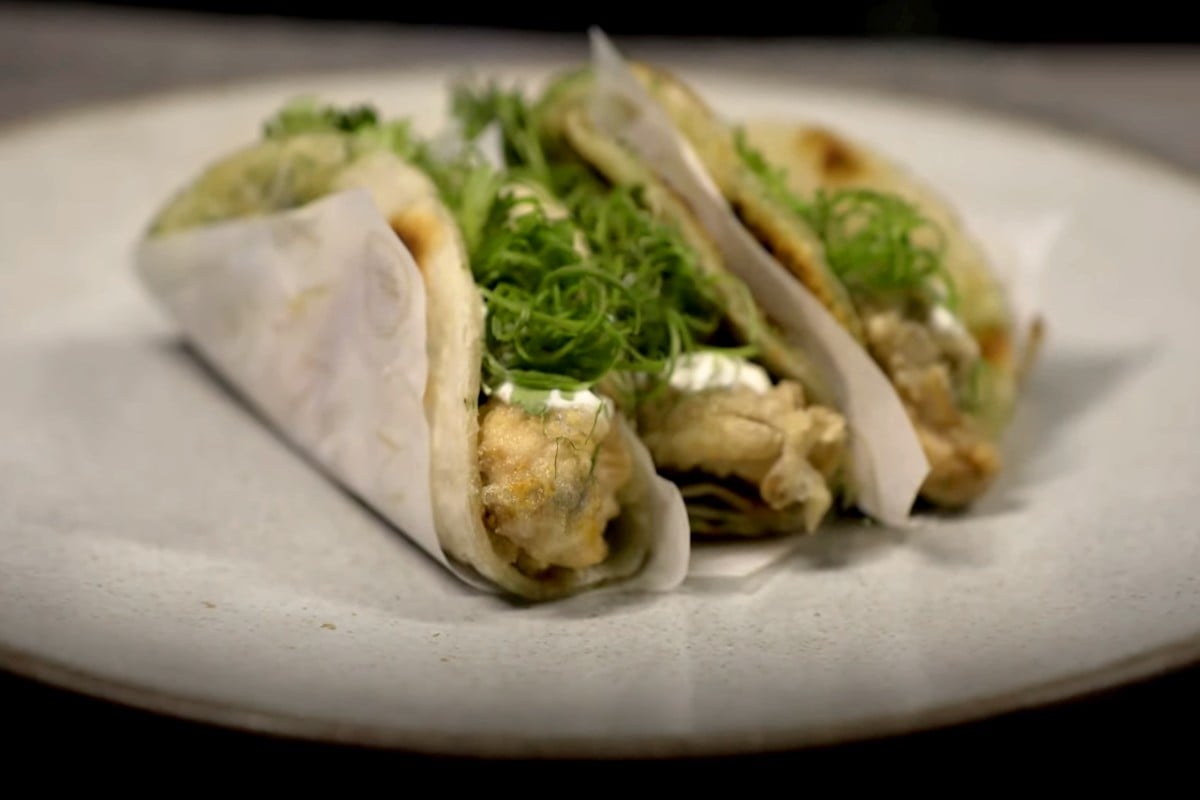 Medium
45
mins
1 hour
to rest the dough
4-5
people
By Vicky Cheng
Chef/Owner of Vea Restaurant and Lounge, one Michelin star and on Asia's 50 Best Restaurants list

Hong Kong-born chef Vicky Cheng was raised in Canada and worked in restaurants in Toronto and New York (including Daniel in New York). He moved back to Hong Kong and was chef at (now-closed) Liberty Private Works before opening VEA Restaurant and Lounge in 2015. At Vea, which has one Michelin star and is on the Asia's 50 Best Restaurants list, Cheng draws on his Asian and Western roots with his “Chinese x French” cuisine, offering a tasting menu that, depending on the season, can include playful takes on iconic Hong Kong dishes such as braised sea cucumber and clay pot rice.

In this dish, Cheng makes a luxe version of a popular Chinese street food snack, scallion (spring onion) pancakes, by adding fried oysters. In Hong Kong and other parts of east and south-east Asia, seafood vendors sell shucked, small (about 2.5cm/1in) fresh oysters that are used in dishes such as oyster omelettes and baby oyster congee. These might be difficult to find in other parts of the world, and using another small type, such as Kumamoto, would make the cost of this dish prohibitive. If you must, use the shucked oysters sold in plastic tubs in the refrigerated sections of supermarkets, buying the smallest ones available. Depending on their size, you’ll probably need just two to four of those oysters for each pancake.

Cheng says that if you don’t have a hand-held food smoker (such as a Smoking Gun) to just use plain sour cream, lightly seasoned with salt and pepper. He also says that if you don’t need all the scallion pancakes for this dish, to wrap them, uncooked, in cling-film, then freeze. Cook them while they’re frozen - no need to thaw. And while Cheng makes 10 22cm (9in) pancakes and then uses a 10cm (4in) cutter to cut out 20 perfectly round circles - best for restaurant presentations - he says if you don’t want to waste the trimmings, you can portion the dough into smaller balls (about 40g/1½oz)) and roll them into 10cm (4in) circles.

This recipe looks long, but you can do some of the steps simultaneously: for instance, while the dough for the pancakes is resting, prepare the oysters and the frying batter. The recipe makes 20 pancakes - enough for 10, serving two per person, as a starter, or four to five as a main course.

Lightly season the sour cream with salt and pepper and cover the bowl with cling-film. Fill the chamber of a hand-held food smoker with applewood chips. Light the wood and insert the tip of the hose into the bowl, under the cling-film. Fill the bowl with smoke and then remove the hose and cover the bowl tightly with the cling-film. Set aside while preparing the rest of the ingredients. (If you don’t have a hand-held smoker, just season the sour cream with salt and pepper.)

Make the pancakes. Sift the flour then put it into the bowl of a stand mixer fitted with a dough hook. Add the salt and baking powder and stir to combine. With the mixer speed on low, pour in the hot water in a steady stream. Add 30ml (2tbsp) melted lard (or cooking oil), then drizzle in the room temperature water. Mix on medium speed until the ingredients are combined and form a firm dough; if there are dry spots, add a little more water. Take the dough from the mixer, cover it with cling-film and rest at room temperature for 30 minutes. (You can mix the dough by hand. Put the flour in a bowl and mix in the salt and baking powder. Add the hot water and use a wooden spoon to mix. Add the lard, then the room temperature water and mix again. Turn the dough out onto a work surface and knead briefly until smooth.)

Portion the dough into 10 even pieces, then shape each piece into a tight ball with a smooth top. Cover with cling-film and rest for 10-20 minutes.

Finely mince the spring onions and mix them with 1 tsp (or more) of white pepper. On a lightly floured work surface, roll out one of the pieces of dough so it’s a thin circle. Generously brush the surface with some melted lard then sprinkle generously with some of the spring onions. Roll the dough into a snake then stretch it so it’s longer and thinner. Coil it into a slightly overlapping spiral. Shape the remaining pieces of dough the same way then cover with cling-film and leave to rest for five to 10 minutes.

Heat a 24cm (9½in) non-stick skillet (or well-seasoned black cast iron pan) over a medium flame and lightly oil it with some lard (or cooking oil). While the skillet is heating, roll out one piece of dough into a 22cm (9in) circle. Place the dough in the skillet and pan-fry for about three minutes on each side or until cooked and lightly charred in spots. Pan-fry the remaining pieces of dough, stacking them as they’re cooked. After cooking all of them, use a 10cm (4in) plain round cutter to cut each pancake into two circles. Stack the circles then cover with a double layer of a clean kitchen cloth to keep them warm.

In a bowl, whisk the rice flour with the cornstarch, then use chopsticks to mix in about half of the cold water to form a smooth, thick batter. Slowly mix in more water, adding enough to form a thin batter that flows smoothly when you lift the chopsticks.

Pour oil to the depth of about 7.5cm (3in) in a wide saucepan and heat to 180°C (350°F). Dip the oysters into the batter to coat them lightly. Deep-fry until the batter is set and pale golden, about 60-90 seconds. Remove the oysters from the pan and drain on paper towels.

To serve, spread a thin layer of chilli sauce on each pancake. Place several oysters down the centre of the pancake, overlapping them as necessary. Drizzle with smoked sour cream then top with coriander leaves and shredded spring onions.

9/9
Chinese Main Course Shellfish Peanut-Free Medium
Diet definitions
Liking this recipe?
Now you can save the recipe you into your own collection.
Find us on facebook
Join our community and get the latest recipes from all over Asia for you to make at home.